Step into Leon’s shoes. And pants. And undies?

Once upon a time there was a contest guy named Wes. Wes liked to give out games basically every day of the week, and loved ensuring the fine readers of Destructoid paid for as few games as possible. Well, wouldn’t you know it, one day Wes’ sordid past finally caught up with him, resulting in him spending seven months in a workers’ prison in central Montana, where he could no longer give free games away.

Well, I just got released yesterday, and I’m back on my bullshit! I wrestled a bear (name was Russell, he was a truck driver) for some Resident Evil 4 VR keys for Oculus Quest 2, and now I’m desperate to give them away. Please take one. Please?

As one of the highest-rated action/survival horror games of all time, Resident Evil 4 needs little introduction. Hell, it’s followed us around for three console generations now, and will likely show up for a fourth at any moment. Well, now it’s time to save the President’s daughter again — this time in virtual reality! Get all up in Leon Kennedy as he traipses through the European countryside blasting away weirdo bag-heads with chainsaws, giant mechanical little people, and horrifying lake monsters, all the while escorting the incorrigible Ashley Graham.

But seriously, Del Lago is like the scariest thing ever and I’m terrified to go through that in VR.

Experience Resident Evil 4 like never before thanks to Oculus Quest 2, the premier way to experience virtual reality. Leon S. Kennedy isn’t hampered by wires, which means neither are you with this state-of-the-art wireless headset. Look down to see your inventory, throw grenades like you’re in a World War II trench, and shoot harpoons at that horrible sea-beast all without tripping all over yourself in the process. This is the definitive way to play RE4.

Now how’s about putting RE5 in VR? It’s my favorite RE game and no, I’m not afraid to admit that. 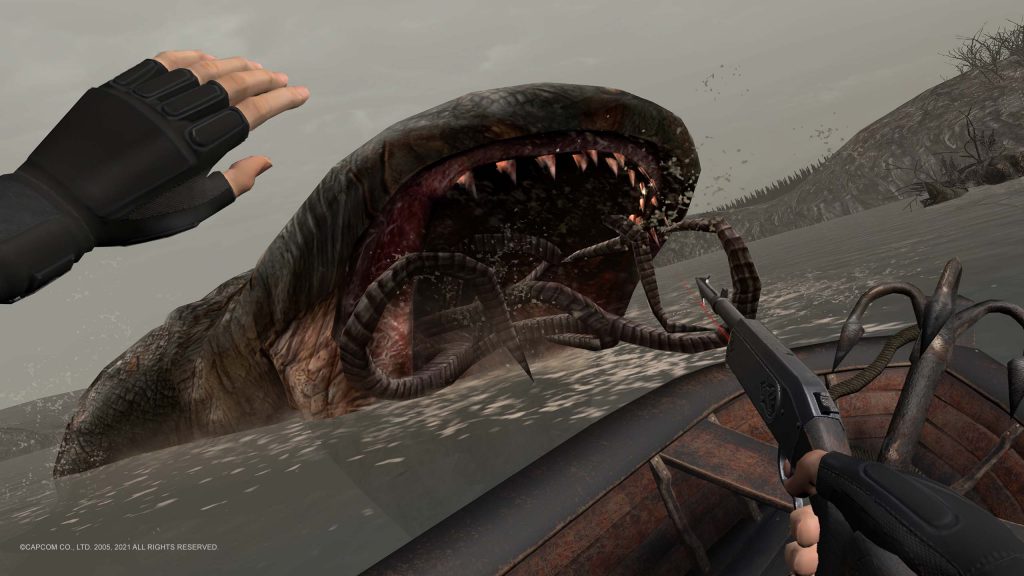 To enter to win your copy, use the widget below to drop your name and email address. You can gain bonus entries by completing the other various tasks within. And make sure to comment below telling us your favorite Resident Evil title. If it’s not 5, you’re wrong!

We have five Oculus Quest 2 keys to give away; note that we are not giving away any hardware so you must already own the equipment. We’re just key peddlers on this one. We’ll draw winners next Wednesday. Can I borrow $5?

Resident Evil 4 VR is available exclusively for the Oculus Quest 2. You’ll have to play the non-VR version on your GameCube. Or PS2. Or Wii U. Or Xbox One. Or PS3. Or…