What your favorite Vampire Survivors weapon says about you

This is my Whip. There are many like it, but this one is mine.

Vampire Survivors has really taken 2022 by storm. Despite launching at the end of last year, the $3 indie gem has garnered a fervent following.

It’s easy to see why, too. The mix of roguelite progression, Castlevania-themed visuals, and gameplay best described as somewhere at the intersection of tower defense and bullet hell just works. Runs are short and sweet, yet compelling enough to keep starting up just one more go-around.

What you pick on that run could be for any number of reasons. Maybe you need to round out a build, or maybe it’s just up to chance. But we all have a favorite. Everyone has a favorite weapon in Vampire Survivors, one they can’t help but pick every time it rolls up. So what does your weapon say about you?

You love the classics. This is clearly, essentially, Castlevania. So why leave the Whip at home?

The Whip is a surprisingly versatile and effective weapon, at just about every stage. Early on, it’s great for wiping out hordes of smaller enemies. As it levels, it covers more area. Its upgrade companion, Hollow Heart, is good for stats, and the crit potential is fantastic.

You’re a methodical player. You know positioning is power. You think about ways in which you can manipulate the motion of the crowds, all in pursuit of a perfect Axe arch to wipe them all out.

Patience is, thankfully, well-rewarded in Vampire Survivors. The evolved Axe is arguably one of the better evolutions in the game. Even before then, well-placed Axes can be a run-saver.

Roll the die. You love Lady Luck, you’re already grabbing clovers, so why not get a Cross?

That said, the Cross can hold its own for a while. It’s a bit fickle, but it can make some space. Really, you want the clover. You want luck on your side. And that’s what the Cross is here to help you do.

The best crowd control is to simply destroy the crowd. You play Red in Magic: The Gathering. You play DPS in MMOs. And you know that damage is where it’s at.

Fire Wand is the pure powerhouse of Vampire Survivors. It starts out strong and only gets stronger with upgrades. Sure, it’s not as fast to fire, and tends to focus on closer threats rather than crowds. But if a big boss comes along, the Fire Wand will get the job done. You picked Imelda, right? The Magic Wand is an unsung hero of Vampire Survivors. The best early option for staving off the exploding ghosts in the Library, and as it levels up, it eventually becomes a machine gun of magic.

The Magic Wand is not flashy. It gets the job done. It’s a dependable option, and you like consistency.

Why work hard, if you can work smart? Eliminate bats as a threat entirely with Garlic, the early-game hero of Vampire Survivors. Garlic is defensive and offensive. Garlic is the easiest way to move ahead, and with the evolution, it’s even better. Honestly, congratulations to the Garlic fans. Y’all are truly playing the smart game.

You liked Santa Water before it was evolved. You just like seeing chaos rain from the sky. Sometimes you forget you have Santa Water, and then it rains on down, clearing out a big bunch of zombies and skeletons, and you smile a little bit. You definitely picked this because it says “Santa Water.” 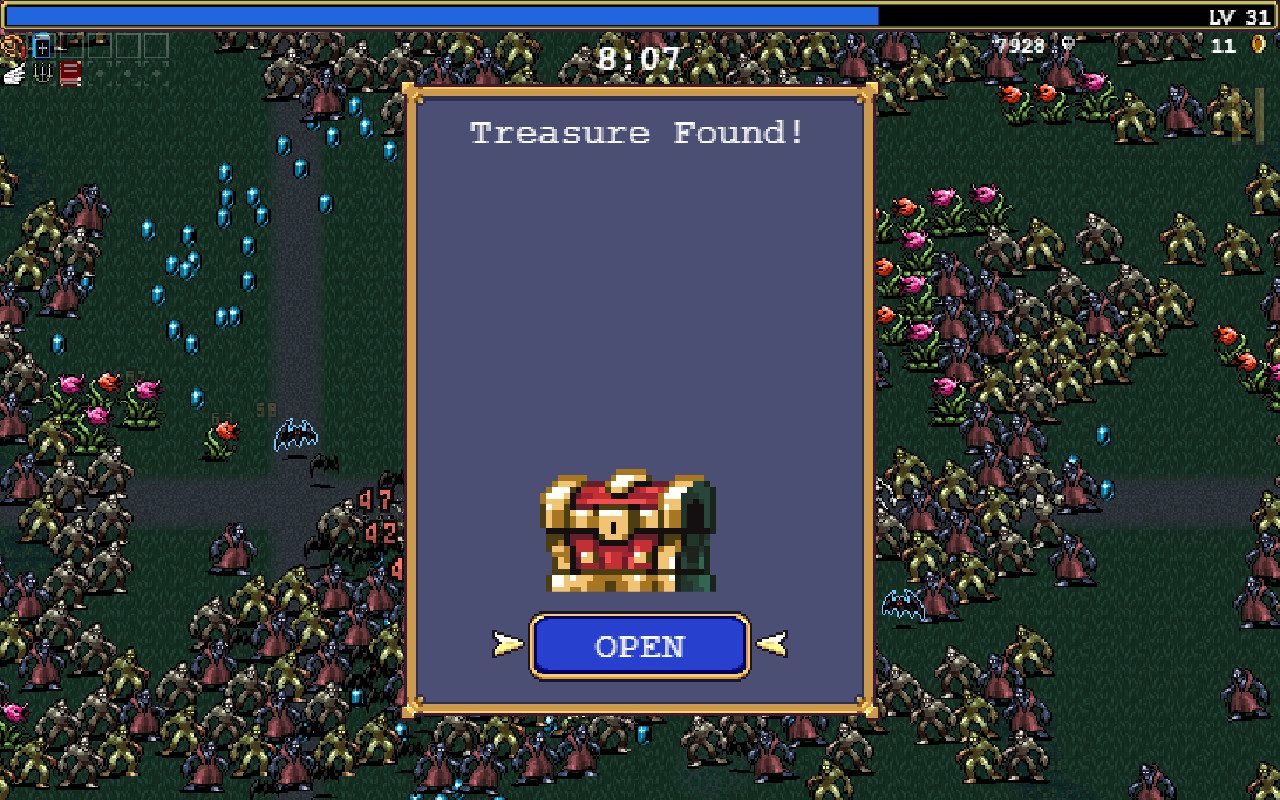 You love the long game. There is an endgame you are working towards, and you will get there. Eventually.

When the Exodia forms, though, it will be exquisite. I mean, it’s a free weapon slot! How can you not want a free weapon slot? All you have to do is level up two comparatively lacking weapons to their final forms, and then get a chest. How long could that take? Much like Dutch van der Linde, you have a plan. And it will work. It’s just gonna take some time.

The Knife is simple. Where you go, it fires. Sure, it’s not the most overpowered weapon. But you like to clear the path ahead. You like to know where you’re going. And you really, really like shooting a whole bunch of Knives out in front of you, real fast.

Orbitals are too good. You like the security they provide. But you also like a little bit of danger. Just enough of a cooldown gap to get anxious, and then the Bibles come back up.

And with every upgrade, that gap shortens. Until eventually, you have assembled the unholy library of death incarnate. I mean, we all have favorites in this game. But we also pick the King Bible up. Even the Garlic players know, the book ring is where it’s at. Other weapons are cherries on top, but the Bible is the sundae.

Evolutions are for the weak. Runetracer is the weapon for those who don’t rely on such frivolities. Really, the Runetracer is already in its final form. At its base level, it can be even more powerful than most other weapons. And it stays relevant, benefitting incredibly from extra projectiles and damage.

Every time you see a projectile bounce around, you see maximized value. And without an evolution component tying it down, you’re free to pick up whatever upgrades you like. Runetracer has it covered. 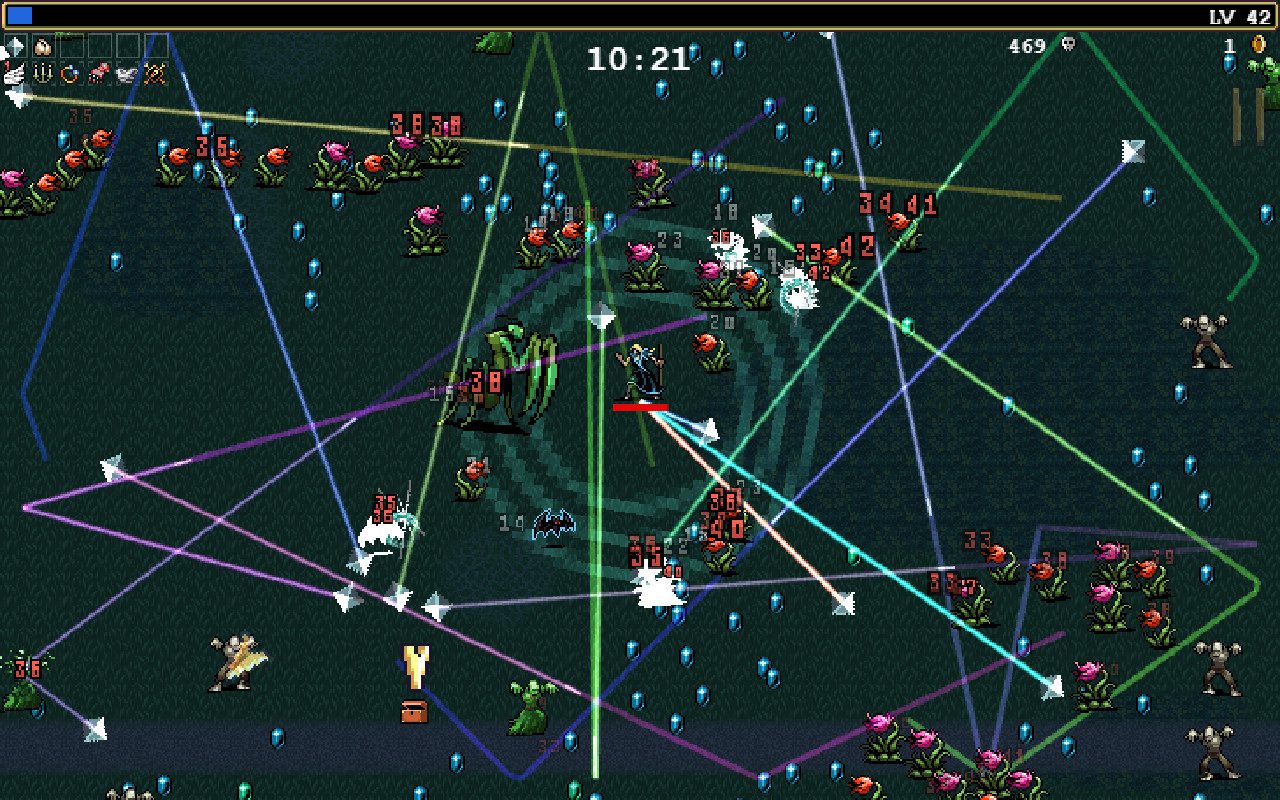 You might have had a little envy, seeing the Santa Water fans get their evolution first. Lightning Ring has been putting in the work for ages. With a new evolution, your time has come.

Fire might be nice, but Lightning Ring rains destruction from the heavens. If Chain Lightning is an option, in any game, you take it. And you love seeing the lightning rain down and annihilate pockets of enemies around the map.

Is it optimal? No. Is it a frugal slot option? Nah. Is it fun? Heck yes it is.

Sure, most times the Pentagram is not the most optimal option. You don’t care. When you’re about to fall and the screen wipes, you’ll know you were in the right.

The truly in-the-know, know. Damage is fine, but freezing enemies is secretly incredibly useful. Freeze those enemies and slide right by. Keep them in place, and they can’t get close before your weapons wipe them out.