Remember we parked in the Itchy lot

You probably have some good memories of at least one bad game. I’ve got a few. One that stands out is when I rented Universal Studios Theme Parks Adventure. It was released one month after the GameCube. The GameCube had a pretty killer launch, but eventually, you run out of big titles to try out and decide to see what washed up in the gutter. So, I rented it, and my mother decided to try it out while I was at school. What followed was this short period where we would swap tips on how to get through the game.

I think it was just funny to see my mom just so put off by a game. I’m not saying she doesn’t have taste, but I think it was the first time I saw her struggling to grasp how such a terrible game could exist. I remember her giving me the tip, “You can get points from the Waterworld ride. It’s just a movie.”

That’s bonding, right there. Trading tips and utter bafflement with each other. And that’s the only reason I look back fondly on Universal Studios Theme Parks Adventure. 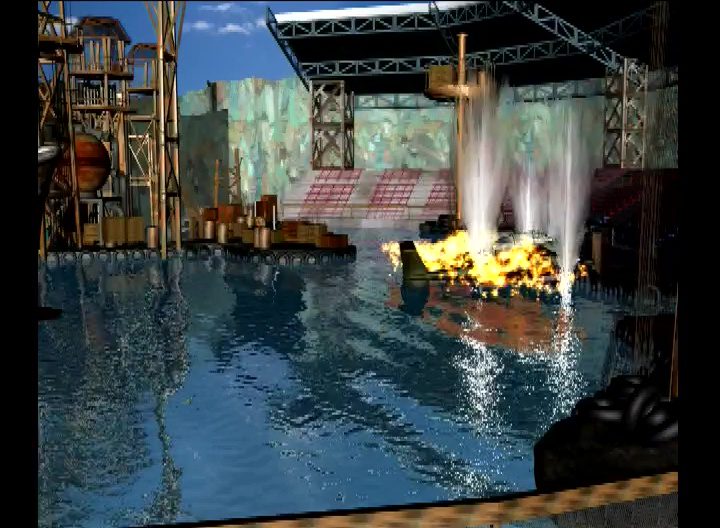 Roller Coaster Tycoon awakened a love of theme parks in me as a youth. As an adult, I recognize them as wonderous places full of marvels of engineering but horrifically infested by humans. Disney World may actually be the most magical place on earth, but people ruin everything and the place is constantly bursting with them.

Universal Studios Theme Parks Adventure captures exactly that. You’re placed in the Universal Studios Osaka theme park, and your guide is Woody Woodpecker. I don’t know if there has ever been a more irritating cartoon character than Woody Woodpecker. Bugs Bunny frustrated his foes, but you still rooted for him because you were in on his jokes and his antagonists were less tolerable than him. No one is less tolerable than Woody Woodpecker. He is the worst human creation ever given voice. I’m not a violent person, but I feel like everything about him is one big temptation to wring his neck.

Your goal is to wander the hellish theme park to earn stamps that will enable you to fucking leave. In order to gain them, you have to play mini-games based on the rides, as well as find all the letters littering that park. 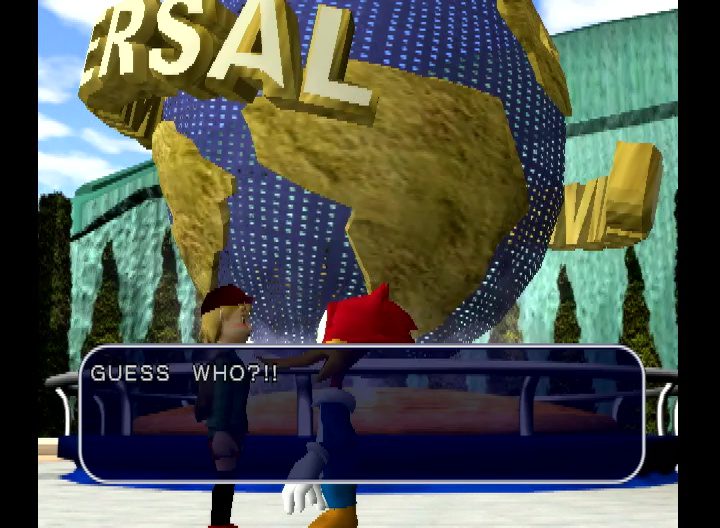 Universal Studios Theme Parks Adventure has mini-games based on Back to the Future, Jurassic Park, Backdraft, Jaws, E.T., as well as a quiz and one based on the Wild, Wild, Wild, West Stunt Show. They all suck, but at different levels. Let’s take a look:

This one is actually pretty similar to the ride, but with less chance of whiplash. Biff Tannen has stolen a DeLorean time machine, and it’s up to you to chase him in your own time machine. The goal is to not run into walls. Avoiding walls allows you to catch up and ram Biff. Give his ride enough bent fenders and you win. As far as the mini-games go, this one is sort of tolerable.

I think this would be more fun if the entire mini-game was driving to outrun a T-Rex while Jeff Goldblum panics in the back seat. Instead, someone else drives while you launch homing rockets at velociraptors and any other dinosaur with the misfortune of crossing the street. It is laughably ugly. There’s more draw-distance fog than an N64 game, and the environments have an impressive lack of detail to them. Just to make things more hilarious, the framerate still drops in some spots. It’s a really awful on-rails shooter and it feels like it just goes on and on.

I might have heard of Backdraft. Wikipedia suggests it might have been decent, but I never hear anyone talking about it. The mini-game itself is probably the most game-like game in the collection. You control your stupid child character around a burning building, putting out fires and rescuing people. Stuff explodes and you have to try to not die. Thinking back on it, this was the last game I had to complete, so I think I’m maybe being more kind to it than I should. The bar was just set so low at that point that nothing could have slid under it. 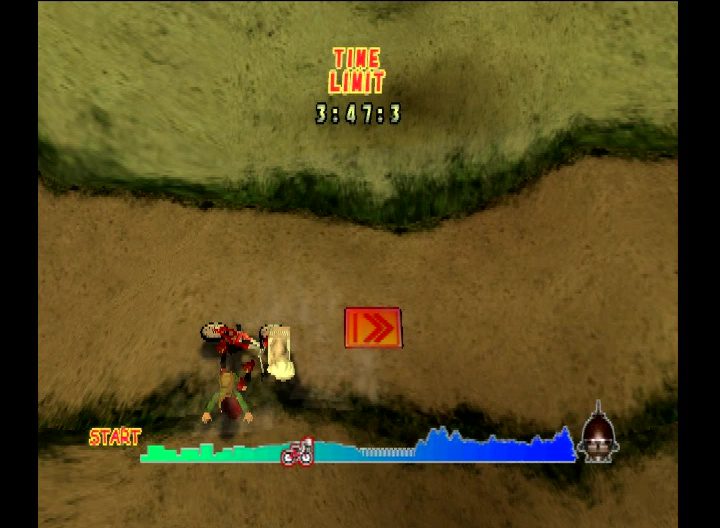 An interesting concept with poor execution, Jaws puts you aboard the Orca, and you’re tasked with defending it from the titular shark. You pick up barrels and junk, then watch your radar to see what direction he’s coming from. Once he pops up, you hit him with the garbage to put him back down. This wouldn’t be so bad if the radar wasn’t so unreliable and there was more time to hit the shark before he ate your boat. I frequently had to throw before it even surfaced, hoping that I was pointed in the correct direction.

My husband actually has an irrational fear of E.T. and I’ve never seen the movie. The game is like the worst imaginable version of Excite Bike. Unexcite Bike? Mundane Bike? Yawn Bike? You’re set on a track and have to avoid stuff littering the path while trying to get to the end. The worst part is trying to adjust your bike so you land properly: exactly like Excite Bike except you’re in the air for far less time. However, the game is ridiculously easy, so even if you fall down a whole bunch, you still might end up with the stamp.

This is a standard shooting gallery, but far lazier. Here’s how you win: shoot targets, then when the bonus target pops up, shoot that. You win. The biggest setback to this is that the fire button is R and the GameCube’s analog shoulder buttons feel awful to shoot with. I don’t know how I could stand it with games like TimeSplitters 2. They’re big, clicky marshmallows.

I really don’t know enough trivia about ‘90s movies for this. Then, every once and a while, they’ll be like, “who directed The Birds?” I actually know that one, but this game feels like it was mostly made with kids in mind… which is just now striking me as strange. Anyways, I had to use intuition, repetition, and my mind’s unique inability to let go of even the most mundane of trivia knowledge to succeed. You can then play more mini-games for extra points, but it’s concentration and one of those sliding picture puzzles like you find in dentist offices and Wind Waker. 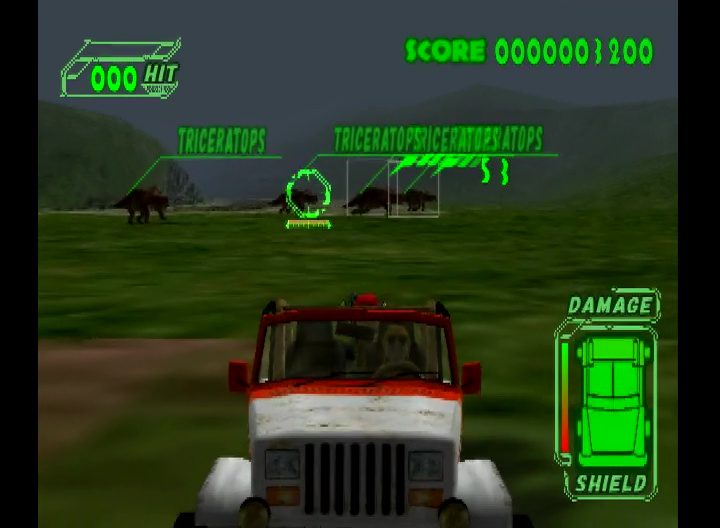 When you’re not playing mini-games that would be embarrassed by Mario Party, you explore the park, which is like something from an experimental indie horror game. It uses pre-rendered backgrounds, much like Resident Evil, but figuring out how they match up is impossible. If you talk to one particular person, they’ll give you a map which is simultaneously your only means of finding your way around the park and also completely useless.

It isn’t like you have a compass. The pre-rendered backgrounds don’t give any indication of what direction you’re going in. They don’t even give much of an idea of what each section’s exits and entrances are. Sometimes, the right-bottom of the screen is a transition point, and the left-bottom of the screen moves you somewhere else. The map is only really good for playing hot/cold. You move somewhere, check your map, and see whether you got closer to your destination or further away.

Only a couple of the activities are actually available from the hop, the rest you can’t access right away because of lines. Line of people. Queues. The lines are too long in an idealized version of a theme park. When brainstorming for ideas, someone on Universal Studios Theme Parks Adventure’s development team suggested over-stuffed queues as a way of advertising the park, and no one objected. In order to bypass them, you have to save points by collecting trash and visiting Waterworld until you can buy corresponding hats that let you just skip the line. 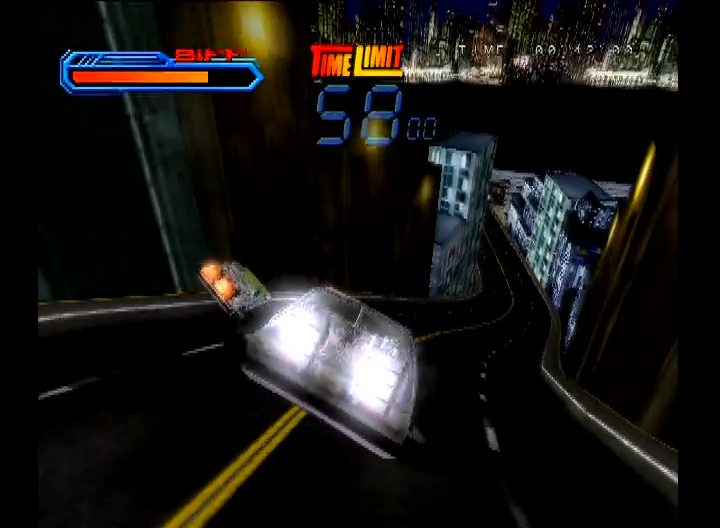 I didn’t go into Universal Studios Theme Parks Adventure thinking it would be any good. I already knew it was closer to the top of the “Worst Games Released on GameCube” than it is to “Most Okay-est Advertisement Video Games.” Really, I was just amused at how badly I wanted to finish it quickly. The credits ran in 2 hours, 15 minutes judging by the video evidence I recorded. I didn’t go for the red stamps that mark beating a certain score threshold in each game, but I really don’t want to play Jurassic Park: The Ride a second time. I just wanted to escape from the hell that is Universal Studios Osaka.

This sort of thing was attempted before with 1990’s Adventures in the Magic Kingdom on NES. It had the advantage of being developed by Capcom while they were rocking their Disney license with such games as Duck Tales and Rescue Rangers. However, even that game managed to kind of suck, despite its prestige.

However, it wasn’t anywhere near the level of Universal Studios Theme Parks Adventure. Surprisingly, the developers were credited. If you look back, it actually includes Mikio Ueyama, who designed Air Zonk, and Akira Sato, who worked on Mister Mosquito. Do you know what they did after Universal Studios Theme Park Adventure? Nothing. Well, okay, Sato-san worked on the sequel to Mister Mosquito, but then also disappeared from the industry. That is how much this game sucked; it absorbed two of my heroes into its putrid mass.

Elden Ring: Ashes and How to Upgrade and Use