Borderlands is a fascinating series, in the sense that there always seems to be a game (or DLC) in the works for it, and they all kind of bump up against one another. There are iterative differences for sure, and tiers of quality, but when I hear the word “Borderlands,” it’s hard to think of a pivotal moment in franchise history that helped it break through into the zeitgeist. Tiny Tina’s Wonderlands doesn’t offer up a striking historical moment like that either, but it’s par for the course, which is mostly good news if you’re looking for another looter shooter.

So, it’s Borderlands, but Tiny Tina is narrating everything with a fantasy/D&D tint (much like her DLC for Borderlands 2) and can bend the narrative to her will (from a meta-thematic standpoint). There’s guns, classes, and lots of loot to enjoy and laboriously sift through, but now you can “roll” (choose) your own character instead of playing as one you can buy an action figure for.

Since classes are intrinsically important to Borderlands, I’ll briefly go over all six gimmicks:

There’s a good spread! Of course, everything uses guns, and there’s a dual class mechanic, which significantly widens the build system. For my “main” character, I went Clawbringer and Spore Warden for the double companion action, which was a ton of fun, but naturally other combos exist. Once you select your initial class, you can choose your body type/look, pronouns, voice, background (things like “raised by elves” or a “recovering hoarder,” which mainly grant stat bonuses and spreads), and excess stat distribution.

During all this, you’ll be going on quests, truncated by story bits from Tiny Tina and her crew (which is mainly her “party” of Andy Samberg and Wanda Sykes), as well as banter from the evil Dragon Lord (Will Arnett). They’re basically talking the entire time, which is par for the course for Borderlands. If you were already tired of Tina based on her sequences in other games, you might not make it through without turning off the voice audio. I wouldn’t, though.

Ashly Burch definitely doesn’t phone it in here, and Samberg and Arnett are really into it as well, hamming it up when needed. There is a bit of a disconnect between the aforementioned meta “party” and your actual actions in-game, and while it’s easy to hand-wave while you’re in the middle of blasting things, it is felt during the slower portions of the game. The narrative doesn’t take itself seriously, which works in its favor for a spinoff like this, but will definitely annoy some people.

The villain will riff on tropes and talk to you “one on one” (just like Handsome Jack might “hack into your comms” and do the same thing in prior games), and the jokes are still a mile a minute. But given the relaxed “anything goes” theme, a lot of the writing feels less cringe, as the “hard” post-apocalyptical setting is completely dropped in favor of something breezier. Tiny Tina’s Wonderlands‘ difficulty system backs this, as you can swap between “relaxed, balanced, and intense” at any time, which is a sliding scale of player damage (and an increased emphasis on elemental matching), enemy damage, and gold drops. 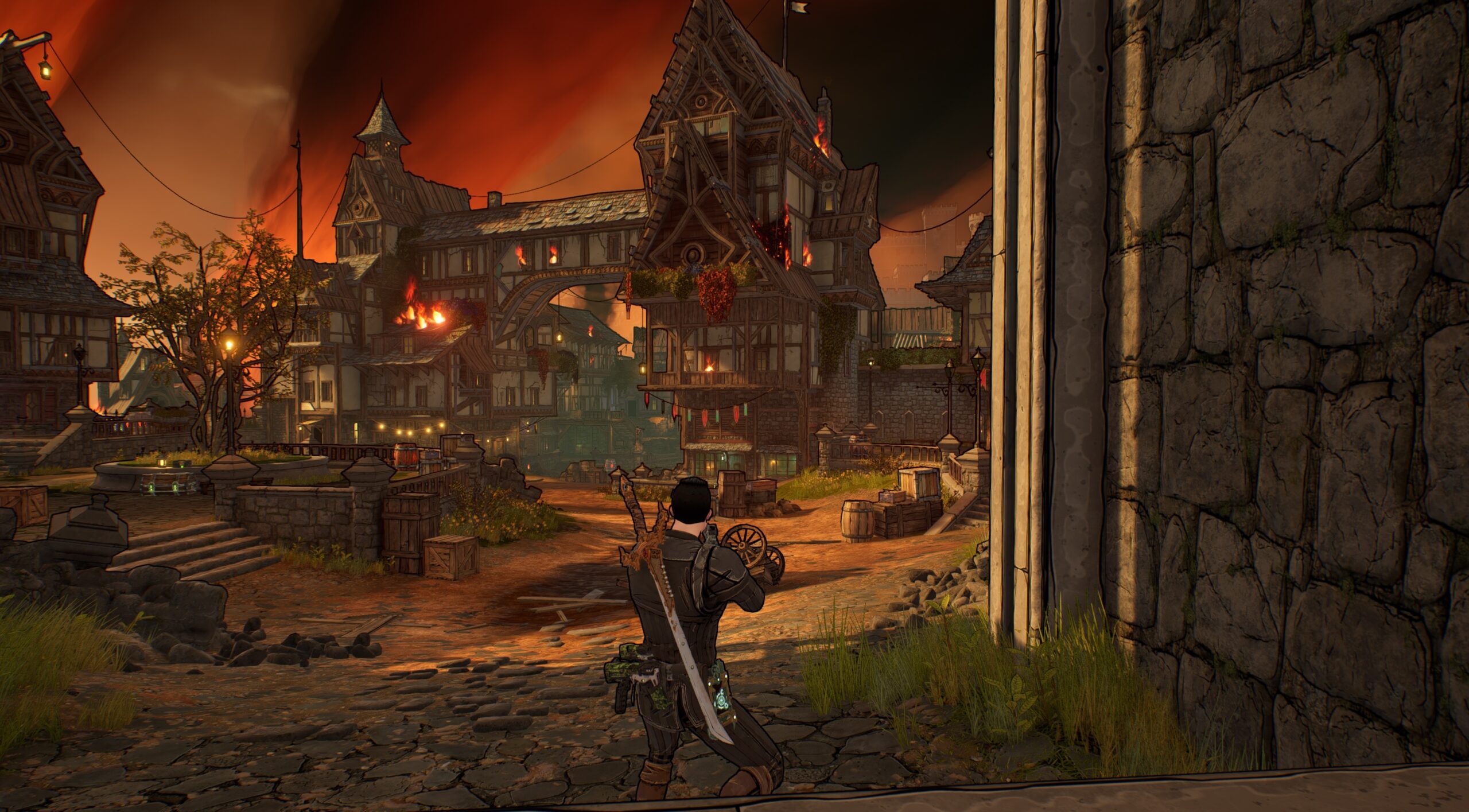 There’s a cool moment very early on that keys you into the type of game Wonderlands is going to be. I ran into a shipyard full of skeletons, with Tina describing a scene of calamity, with subsequent flourishes happening on screen after her rundown. It’s a fun vibe that the original Tiny Tina DLC nailed, and it’s still pretty unique to this day. The writing is just silly enough to work, and its lowest moments never approach the lows of Borderlands‘ cringe.

Some of the choreography does feel canned. A lot of setups involve getting to an area, being somewhat corralled, then asked to defeat an elite enemy: afterward, a wall explodes and you can progress. When zones are more open-ended (like the one above) this stings a lot less, but some locations are so linear that it feels like a string of arenas connected by exploding walls. Conversely, I feel like the Borderlands series has gotten better about providing varied environments beyond the dull trash heaps of the first game, and Wonderlands keeps that tradition going.

A few elements of the inventory system are changed here (with a bigger emphasis on a melee equipment slot, as well as spells that can be installed). But it still has several of the same drawbacks and inelegant design — particularly a huge amount of junk and having to manually choose items to junk. The busywork and metaphorical inventory Tetris (item limit) returns, but with more build options: it’s a tradeoff.

To get to new missions, you’ll traverse the “overworld” (seen in the screen below), which I’m kind of take it or leave it on. Simply put it’s set up like an old-school platformer world map, with light exploration elements, very light “puzzles,” and a few basic “random encounters” that whisk you away to an arena to fight enemies for loot. In that same vein, it’s inconsequential as there isn’t an over-reliance on it. At worst you can generally run around the random encounters and select the next zone in under a minute.

As is the case with most Borderlands games, the more you play, the more you unlock, and the more fun you’ll have. The overworld lets you go more places, the dual class system opens up more builds, and there’s always the classic endgame activity in the form of the “Chaos Chamber,” which is basically a randomized dungeon to replay, and a step up from several other Borderlands equivalents.

Tiny Tina’s Wonderlands is more Borderlands, and the lighter fantasy fare might actually get people to dive in for the first time. With that in mind, it’s still more Borderlands, so the same basic formula isn’t going to magically change your stance if you’re a lapsed fan.

How to level up your Skills