The Alchemist of the Mysterious Dream

The Dream Police live inside of my head

I started into the long-running Atelier series with Atelier Ryza and its sequel. They never quite satisfied, but it isn’t as though I disliked them. They were long, wordy adventures that badly needed about half their dialogue trimmed, but they have their charm. Especially if you enjoy PS2-era JRPGs like Dark Cloud. 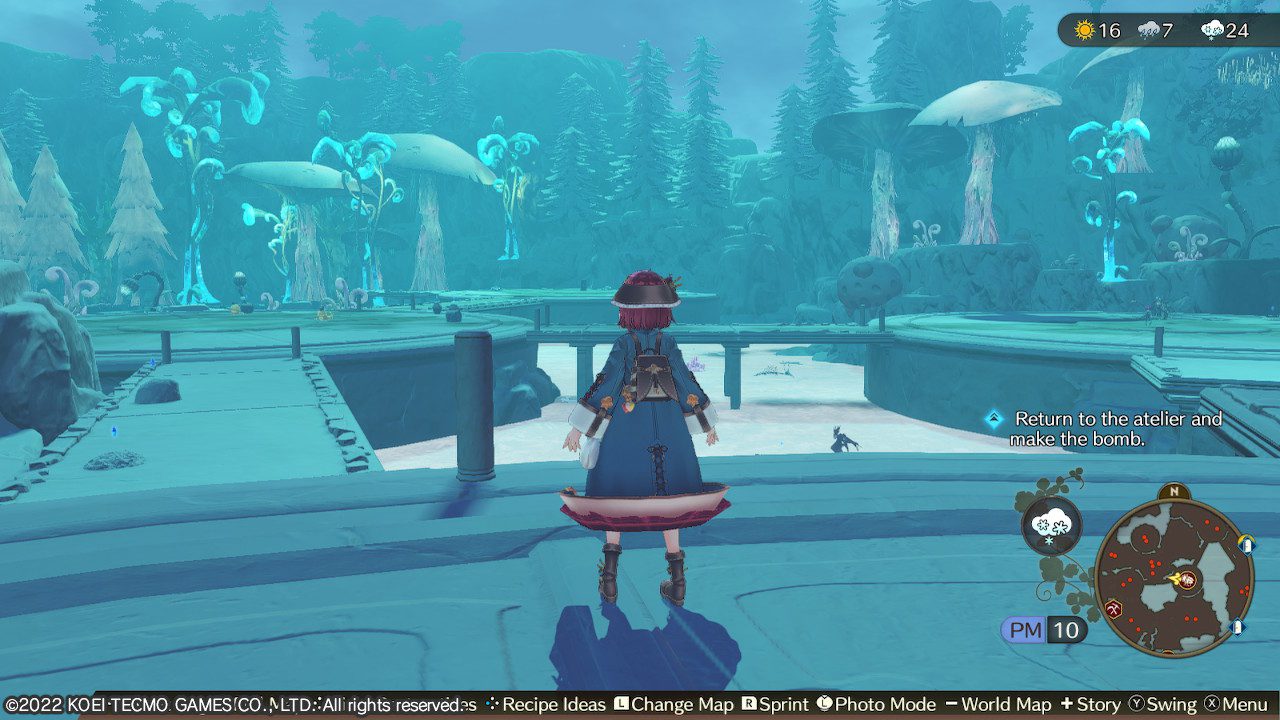 To answer a question that some of you will have: no, I don’t think you need to have played the first Atelier Sophie to understand what is going on in this one. There’s a recap available in the main menu that will give you the basics of what happened, but aside from Sophie and Plachta, none of the previous party members appear. References are sometimes dropped, but they always seemed to be for flavor rather than substance. Sophie’s friendship with Plachta isn’t even explored that heavily in favor of new characters, including the past-self of Plachta who Sophie treats as essentially a new person.

The story of Atelier Sophie 2 involves the duo being sucked into a strange portal and winding up in (checks palm) Erde Wiege, which is a strange world where people’s dreams come true. Sort of. The rules of Erde Wiege are kind of all over the place. Time moves differently than in the real world, but it kind of doesn’t. Different people from different eras intermingle, including Plachta and her younger self. Occasionally, they even discuss meeting up in the real world once their dreams are over, but how would that work when they’re probably from different time periods? Oh well.

The world really isn’t that different from the ones in the Ryza games. For being dreamlike it’s entirely not surreal. It’s more of a dream world for narrative reasons than aesthetical ones.

While the core gameplay remains unchanged, a lot has been tweaked for Atelier Sophie 2. You still pick up ingredients for alchemy and harass the wildlife, the combat has been changed (or changed back) to a more customary JRPG turn-based battle system. In terms of alchemy, the synthesis system has been expanded from the bubble system to one where you have to slot elements onto a grid and try to maximize the traits picked up by what you’re creating. However, unlike the Atelier Ryza games, you can’t synthesize your way to new recipes. Instead, they’re unlocked by completing tasks in the world.

Those are the things that have changed the most, but they’re rather impactful changes. The world make-up is the same and many of the enemies are unchanged. Ryza’s thick thighs have been changed out for Sophies impossibly fluffy coat, but in terms of characters, I’d be hard-pressed to describe how they’re different. Ryza was often stated to be a bumpkin, but it rarely played out in the games. They’re both talented but lazy individuals with strong willpower and affection for their friends. Other than that… 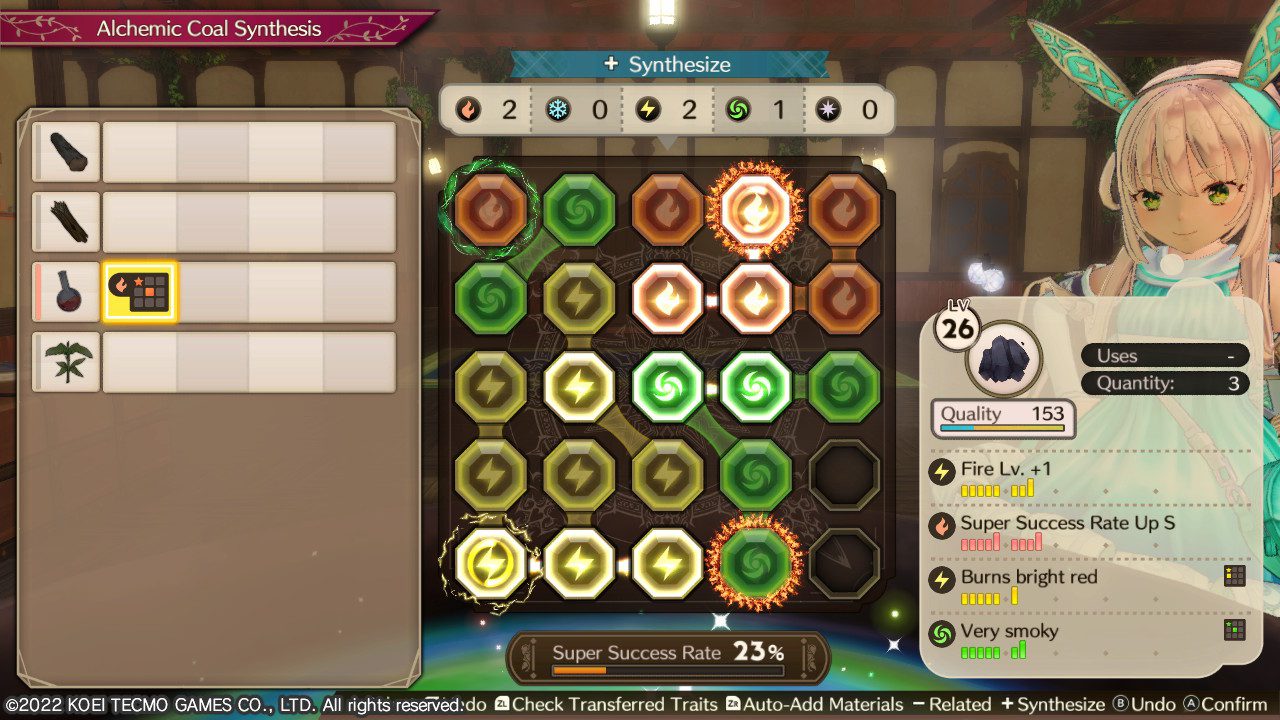 Honestly, Atelier Sophie 2 did manage to win me over. The alchemy is better paced and takes longer to learn how to do it effectively. It really feels like I bumbled through the first half of the game until aspects of the deep crafting system started clicking into place. There’s a lot to internalize, and while there’s a tutorial for just about everything, it can take some time before you’re making quality merchandise.

While some of the characters are just as annoying as the ones in the Ryza series (why is Alette even here?), there were at least a couple that stood out to me. Ramizel is a younger version of Sophie’s late grandmother, which causes a unique brand of awkwardness as the two try to maintain friendship while also knowing that they’re tied to each other’s fate. While the story of Atelier Sophie 2 plays out similar to the Ryza series, hitting many of the same beats, it manages to stick better to its themes.

At the same time, it’s still poorly told. Characters go on and on about established facts, and the foreshadowing is about as heavy-handed as a gold statue. At one point, it was so blatant, that it was difficult to watch as the characters went about, unable to do the basic arithmetic that would put two and two together. 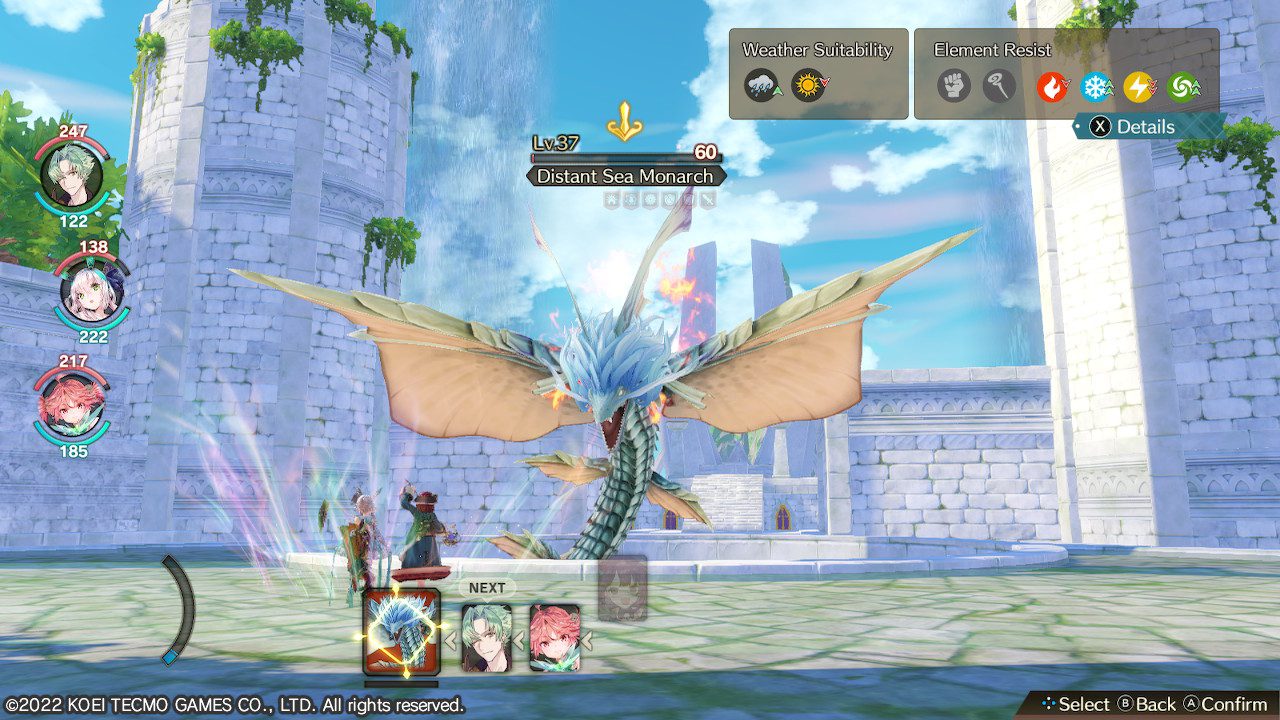 The character chatter a lot to the point where it’s tempting to turn off the dialogue. Almost every time you pick something up in the environment, someone has to tell you how great it is or how heavy it is to carry. In combat, the same lines get constantly repeated and I really just wish Alette would shut up.

It also didn’t know when to end. It felt like a large portion of the 55 hours I put into the game was spent inching towards the ending. Everything ground to a halt for the finale as I was left seeking a single ingredient. I had seen it before, but Atelier Sophie 2 wouldn’t give me a hint on where, so I’m guessing it was randomly from a chest. As it turns out, the only other place it’s dropped is by an optional boss that requires you to pick up an optional (and also somewhat random) quest to even find. Oh, the agony.

But it didn’t necessarily ruin my fun, it just reminded me of the downside to trying to play a game on a deadline (which I missed). Otherwise, I always enjoyed picking up Atelier Sophie 2, especially in the mornings, as it’s a bright and laid-back game to start the day with. It’s well-paced and it’s very rewarding to learn the smaller facets. I spent more time plumbing the world for ingredients and rewards than I did with the Ryza games, and that means one thing: it really nailed the recipe.

Breath of the Wild bomb launch