“A Kirby and the Forgotten Land demo is coming to the eShop today” is just the phrase I needed to hear right now. And having played a bit of the game so far, I’m happy with how it’s turning out.

You’ll get to see the very light and lightning-quick setup of Kirby getting whisked away to the titular Forgotten Land after being sucked into a black hole on his homeworld of Planet Popstar: then it’s off to the races. Upon booting up the three-level demo (full stages with secrets in tow, and a boss fight), you’re greeted with a prompt: wild mode (normal difficulty), or spring breeze mode (you get more heath, and according to a Nintendo spokesperson, you can “play through the game at your leisure”).

The demo showcases Kirby and a Bandana Waddle Dee (with the classic spear), who can cooperate via two-player local co-op (Player 1 is always Kirby, and Player 2 is always Bandana Waddle Dee). While co-op technically opens up after the 10-ish minute tutorial in the core game, in the demo, you can play it immediately as Kirby enters the extremely Crash Bandicoot 1-esque beach intro zone. A Nintendo spokesperson stresses that co-op is local only, in case you were wondering. 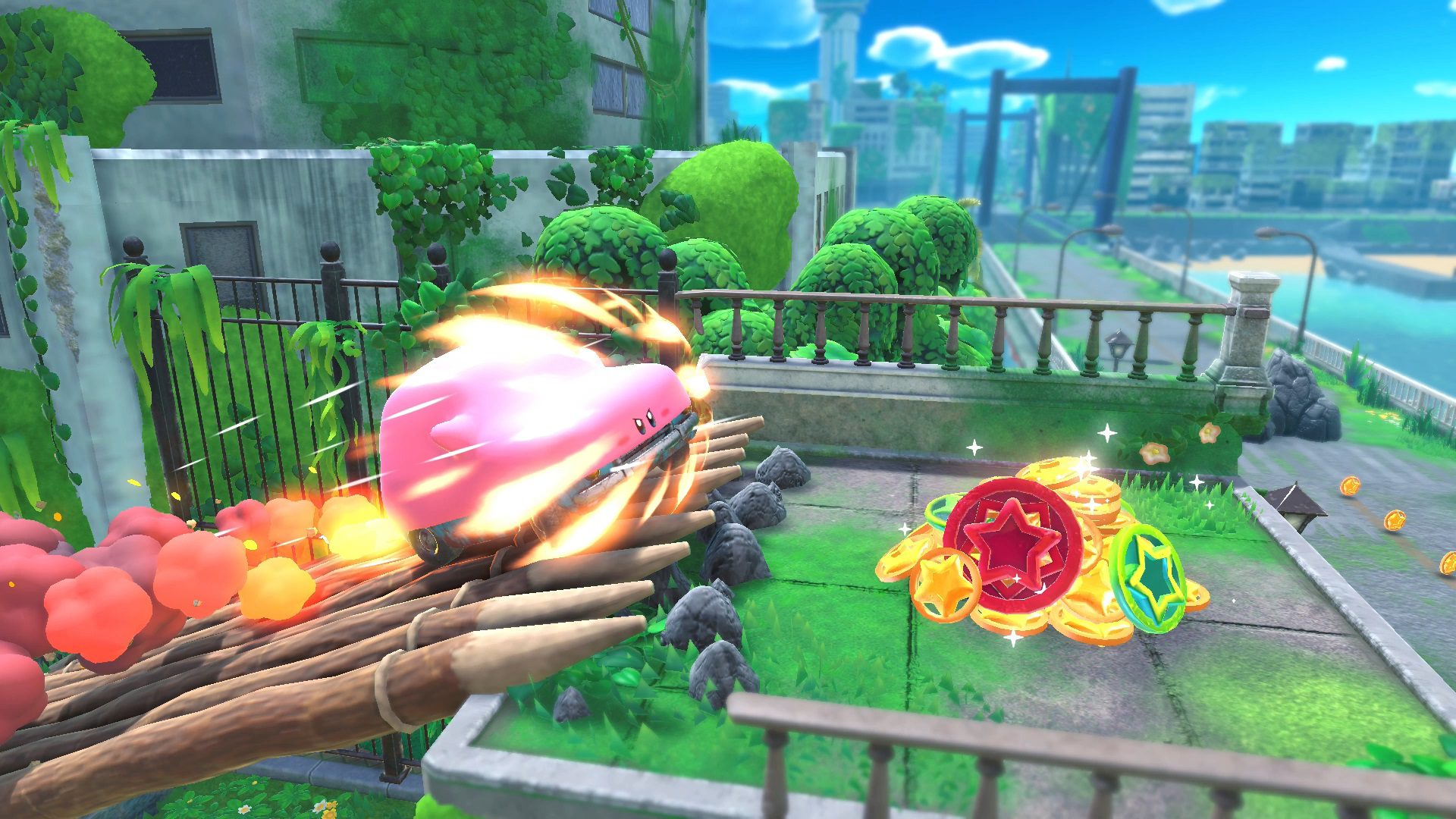 As far as copy abilities go, the demo gives us tried and true access to powers like sword, cutter, ice, and bomb. Bandana Waddle Dee doesn’t use copy abilities, and adopts more of a sidekick format. It wields a spear which it can use to poke people, or fly around with a helicopter move that rains spears below it. If it dies, it comes back after a timer (which doubles as its health bar) ticks up. Just like classic Kirby games you can “share” health via bumping up against one another and high-fiving.

Kirby is the real star here of course. There’s a full dodge suite that players can utilize to accommodate the 3D shift, but HAL has done a fantastic job at not breaking too far from [good] tradition. There’s classic boss battles where the game lets you choose between two copy abilities, but this time instead of shifting into a locked 2D screen, it cordons off the arena. Later on in the game, copy abilities can be evolved through the main Waddle Dee town hub (mouthful mode doesn’t have the same evolution track): something I’m really eager to find out more on.

Mouthful mode, one of the main gimmicks that lets Kirby eat huge objects that take up his entire body, starts early. You have a car that can dash to get around and discover secrets through slamming into walls, and co-op makes this whole mechanic even better; as Waddle Dee rides on the back and throws spears. Sometimes mouthful mode is a formality, like eating a dome and ripping it off of a structure to uncover a secret. When Kirby drops mouthful mode (in this case, a car), the object pops out, and you don’t lose your copy abilities when eating things: thank goodness.

The second level of the Kirby and the Forgotten Land demo opens up and starts to show people the main gameplay loop. You have five different objectives. There’s a core goal of finishing a level, which saves three captured Waddle Dees. Then you have secret ones that aren’t revealed on the first run, of the “break this pipe” variety. It’s a clever way to implement some form of replay value in each stage without getting too collectathon-ey. A few examples in the demo involved seeking out mouthful mode abilities to break open walls and unlock optional new areas.

As a note, the demo grants “present codes” that you can use in the full version to connect online and get a few innocuous items from (think mystery gifts in Pokemon). A Nintendo spokesperson clarified that you don’t need a Switch Online membership to use this feature, but you will need one in the final version to access Forgotten Land‘s leaderboards.

The final part of the demo showcases boss battles, which, when cleared in the full game, open new chapters. The Gorimondo gorilla boss takes place in a bigger arena, and you’re constantly able to attack it and whittle down its huge health bar. It’s here that you get to see the nuance of the copy abilities, as ice freeze bosses with a visual effect that impacts gameplay. Bosses also have phases, where they do an animation and gain an extra ability. I can see this getting repetitive over time, but the bosses themselves are fun, unique looking, and well animated. In true Nintendo fashion, it has that first-party polish and puts some other titles on the platform to shame. Forgotten Land sports bold and crisp colors, and the close-ups are detailed. There’s still a lot of personality present with Kirby and this is definitely another example of that.

I’m not surprised that it’s turning out well so far, because it’s really hard to mess up a Kirby game. Stay tuned for our coverage in the future beyond the Kirby and the Forgotten Land demo.