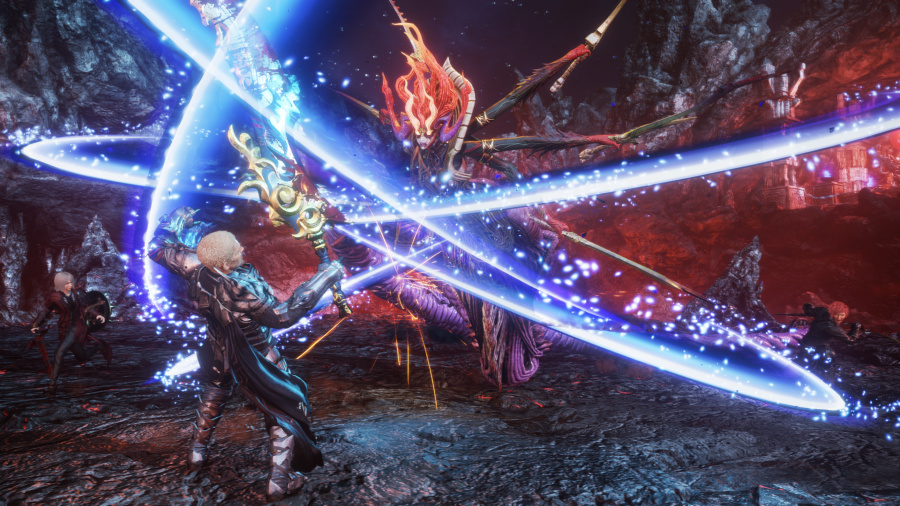 The first four minutes of the ludicrously titled Stranger of Paradise: Final Fantasy Origin set the scene perfectly. There’s a cutscene of a dark knight annihilating a platoon of soldiers while he carries an unconscious princess on his shoulder. Then you’re in a boss battle against a multi-headed creature without context or justification that begins with a man shouting “Bring it!” and ends without resolution. Next there’s a scene of a man walking through a cornfield while Frank Sinatra’s My Way plays only for it to cut out right before he sings “My Way”. And then, finally, a tutorial where you learn how to hit a goblin with a big sword.

That’s the first few minutes of the game: no explanation, no reasoning, just a bunch of stuff that doesn’t really make sense all thrown together. We had to watch this again after we’d finished the game just to make sure we weren’t having a stroke or something, but no this is how the game begins and it only gets sillier from there. Stranger of Paradise: Final Fantasy Origin is an unholy mess of a game, a spectacular car crash of befuddling ideas, nonsensical design choices, and an approach to taste and common decency that would best be described as cavalier. 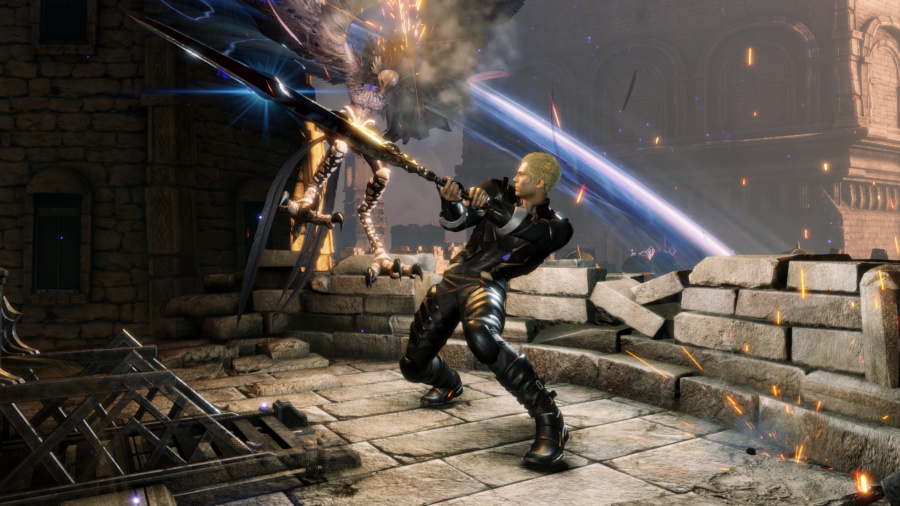 Stranger of Paradise is a Team Ninja developed spin-off to the original 1987 Final Fantasy, a game that released while actor Ronald Reagan was President of the United States, shoulder pads were in, and video game stories were slight. In that game the villain Garland was little but a handful of sprites cobbled together in the image of a knight, the final obstacle in an 8-bit Japanese role playing game, devoid of rhyme or reason or meaningful backstory. Stranger of Paradise tells an original tale featuring a mostly new cast of characters that attempts to set the scene for Final Fantasy by giving its villain Garland context.

Do we need to know why Garland is a baddie? Like finding out that Willy Wonka’s dad was a cruel dentist in Tim Burton’s ghastly retelling of Charlie and the Chocolate Factory or that Darth Vader was an emo kid tricked into literally upsetting his wife to death, sometimes we just don’t need to know. Sometimes, the mystery shouldn’t be looked upon as a hole in the narrative, but rather an infinite opportunity for us to fill in the blanks ourselves. But hey, that’s just us, and Square Enix has other ideas.

The story of Stranger of Paradise is weapons-grade nonsense from start to finish. There are parts that make Kingdom Hearts look like an episode of The Wire. It’s all told using characters that are walking tropes sporting Final Fantasy™ haircuts talking absolute twaddle about chaos and crystals with about as much fervour as the speaking clock. And it’s given to us entirely straight-faced, full of melodrama, without humour, without any appreciation for how laughable the material is, like a Zack Snyder directed Devil May Cry movie. 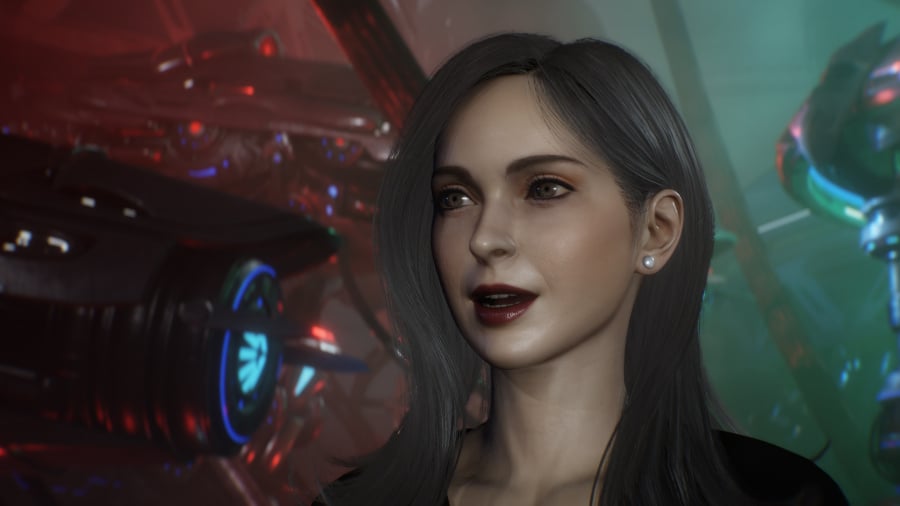 We’ve yet to mention how hideous looking Stranger of Paradise is so let’s talk graphics. When you begin the game you’re given the option of prioritising framerate or resolution, but this is basically a troll since the framerate chugs regardless, and the visuals are utterly foul in either mode. There’s jagged edges galore, appalling lighting issues, and a blurriness during gameplay that has to be seen to be believed. It’s like watching an old VHS on an 80 inch television through a glass screen door. Even if you squint your eyes this still looks like an early PlayStation 4 game.

Without hyperbole we can say that this is honestly one of the most visually upsetting video games we’ve ever reviewed, so much so that the blurriness – more pronounced in outside environments – actually started to give us a headache. Pictures don’t do it justice – in motion Stranger of Paradise is genuinely abhorrent at times, an all you can eat buffet of aesthetic awfulness on practically every conceivable level and then some we’ve probably yet to imagine.

Better is the music. There’s the aforementioned Frank Sinatra track, a little bit of nu-metal, some pulsing synths, and a whole lotta choirs going AHH AHH AHH. It’s all pretty rousing stuff, and one particular classic Final Fantasy motif is given special reverence during the story in a way that is really quite endearing. 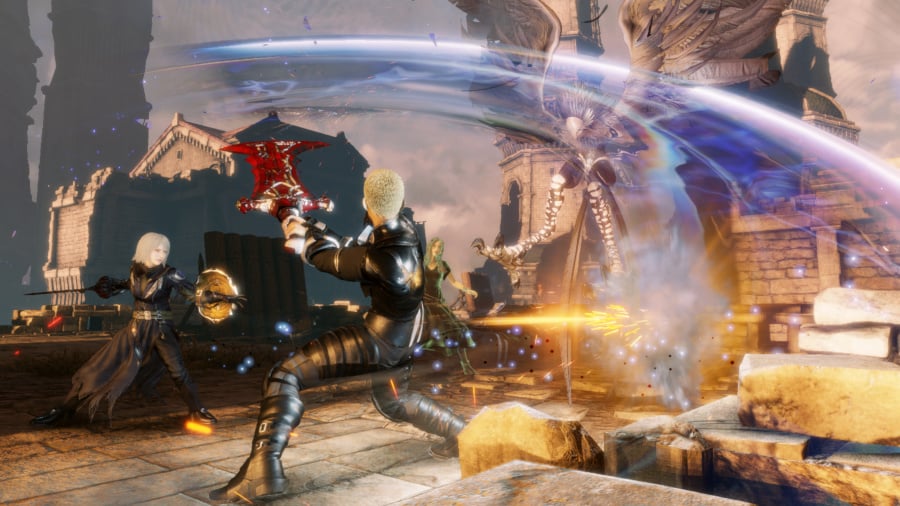 Combat is similar to Team Ninja’s Nioh series only nowhere near as difficult. It’s third-person slice-‘n’-dice action in which you chain together standard combo attacks with more elaborate finishers and attempt to build up your enemy’s break meter – once you do enough break damage the enemy will collapse and you can finish them off in one hit with a simple tap of the circle button.

The bigger, flashier moves in combat require MP and at first you only have two bars of the stuff. But finish off enough enemies by breaking them and you’ll gain MP which means more flashy moves, more mayhem, more MP. You can build up to six MP bars in total, but if you die you lose MP bars as punishment.

You can switch jobs on the fly which offers another tactical element to combat – if you’re in battle with a boss that is vulnerable to physical attacks then you might want to be a Warrior, but if you get low on health and you’re out of potions, switching to White Mage might save your life. Combat is generally quite fun, but the boss battles are where the game shines. These sometimes multi-part encounters against classic Final Fantasy monsters are big and bombastic and quite challenging at times. 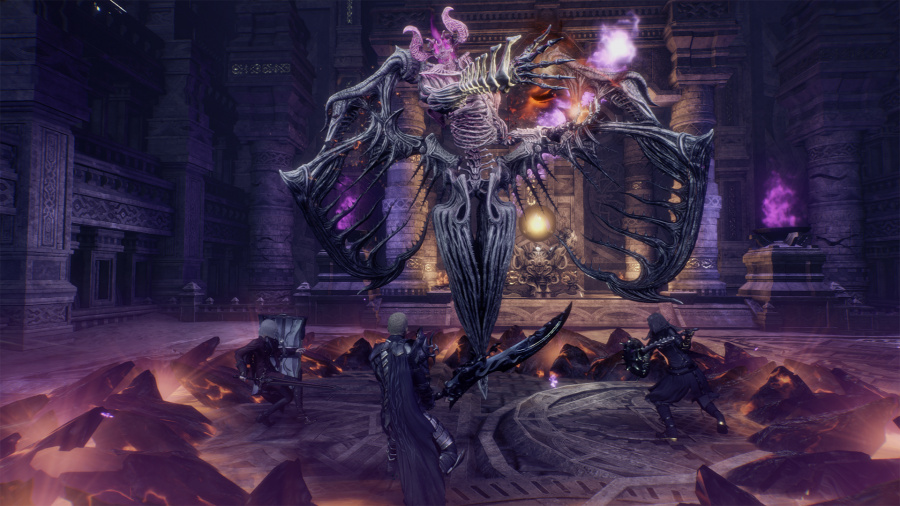 And so there you have it: Stranger of Paradise: Final Fantasy Origin. It got a bit spicy in parts, that review. We had to get the old thesaurus out a couple of times. But can we shock you with a twist ending? Honestly, despite all the problems, the graphical horrors, the insipid dialogue, and the bizarre tone, we actually liked it quite a bit. Maybe Sammy will take us out back and bury us with all the other reviewers who’ve lost their marbles over the years but we gotta call ’em like we see ’em.

Hear us out: there’s something earnest about Stranger of Paradise. At the start of the review we compared the game to a car crash, and we stand by that and all of the criticisms we threw at it. But you have to remember that some people like watching demolition derbies. Some men just want to watch the world burn. And so while we might have been laughing at Stranger of Paradise as often as with it, we genuinely had fun in our 35 hours playing. It’s utterly ridiculous, and a total mess, but for what it’s worth, it’s a fun mess.

Stranger of Paradise: Final Fantasy Origin thinks that it’s Daniel Craig’s James Bond but it’s actually Austin Powers. There’s barely a moment in the game that isn’t stretching credulity, be it the absurd writing, bewildering story, or inane characters. There’s a host of technical issues, too. But somehow, despite everything, it manages to fail upwards and be a pretty good time. Maybe we’ve lost the plot but we liked it.