Spirits Unleashed is a multiplayer game from IllFonic

Because calling it Haunting Grounds would have been too obvious

There are a lot of IPs out there originating in comics, television, and films that have a surprisingly difficult time translating over to video games. I think we’ve all played a game or two based on a movie or TV show that we love only to be disappointed by the end result, left wondering how it all went wrong. And there is perhaps no better example of this than Ghostbusters. Despite being a pretty good candidate for the interactive medium, the franchise has struggled to really cement itself as a gaming experience. In recent years, it’s only managed to hit middling highs with Ghostbusters: The Video Game while sinking to new lows in 2016’s Ghostbusters. Nobody has managed to crack the code just yet, but that may change soon enough with Ghostbusters: Spirits Unleashed.

From developer IllFonic, the team behind Friday the 13th: The Game and Predator: Hunting Grounds, Ghostbusters: Spirits Unleashed is a new 4v1 asymmetrical online experience that, unlike the two aforementioned titles, is designed to be fun for the whole family.

The game is a continuation of the original Ghostbusters universe, taking place after the events of Ghostbusters: Afterlife. With the original firehouse restored, you create your own buster–complete with a variety of character races, genders, and body types to choose from–and join up with Winston Zeddemore’s new crew, going on missions to bust some ghosts. Ernie Hudson is reprising his role as Winston and he is not alone. Dan Aykroyd is back as Ray Stantz, running Ray’s Occult Books. His bookstore is how one player will take up the role of a ghost for each mission.

Last week, I was given a glimpse of the game in action with its museum stage, showing off how Ghostbusters: Spirits Unleashed works from the point of view of the Ghostbusters and the target ghost. As a Ghostbuster, your job is simply to bust that ghost. Using your PKE Meter, you can track down and stun the ghost before trying to rope it with your Proton Pack into the Ghost Trap. All of your core gear can be upgraded and customized as you unlock new ranks. And don’t worry about avoiding crossing streams. Doing so will only make your beam more powerful.

When playing as the ghost, your main goal is to totally haunt the stage, which is to say, scare all the NPCs into fleeing the building. For the demonstration, I got a look at a gnarly little purple ghost, which will be one of the ghosts available when the game ships. As a ghost, you’re able to possess various items in each stage, using them both as a means of hiding from the Ghostbusters and as a way to terrify the people populating each stage. Unlike the Ghostbusters, which is played in the first-person, playing as the ghost is done in the third-person, giving you a greater look at your surroundings. 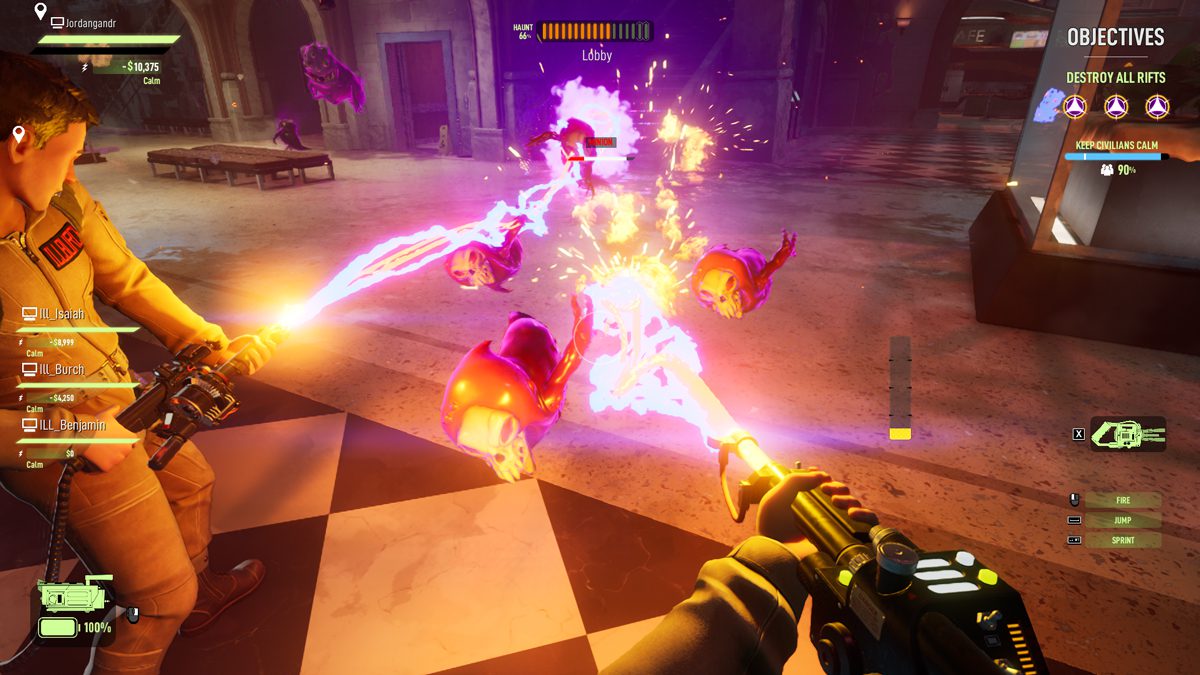 Ghosts have an ectoplasm meter they need to keep track of and the different objects you possess will act in different ways. For example, possessing a large item may be very loud, possibly giving the Ghostbusters a clue to your location. While the ghost can see through walls with Ectovision, its greatest tool is its Ghost Rift.

Because catching a ghost just one time would be too easy and quick for an asymmetrical game, IllFonic has devised Ghost Rifts as a way to extend each round to its target seven-to-ten-minute duration. Ghost Rifts act as a get-out-of-jail-free card for the ghost. When it’s captured, it will automatically spawn at one of these rifts. Ghost Rifts can be moved and hidden by the ghost, but just know they can also be destroyed by the Ghostbusters. There are three rifts available in the museum stage, but the developers said the total number of rifts will depend on the stage.

Seeing it in action, I can’t help but think how perfect the Ghostbusters formula is for an asymmetrical experience. It just fits, and without the death and blood found in some of IllFonic’s other games, it’s one that has the potential to reach a lot more players, especially those younger ones.

It’s also a game that has the potential to reach players who don’t really care about going online to play with strangers and friends. The developer said its AI programming has improved since Predator: Hunting Grounds and it’s working to make sure people who want to play this game by themselves will be able to do so offline with the AI/CPU. 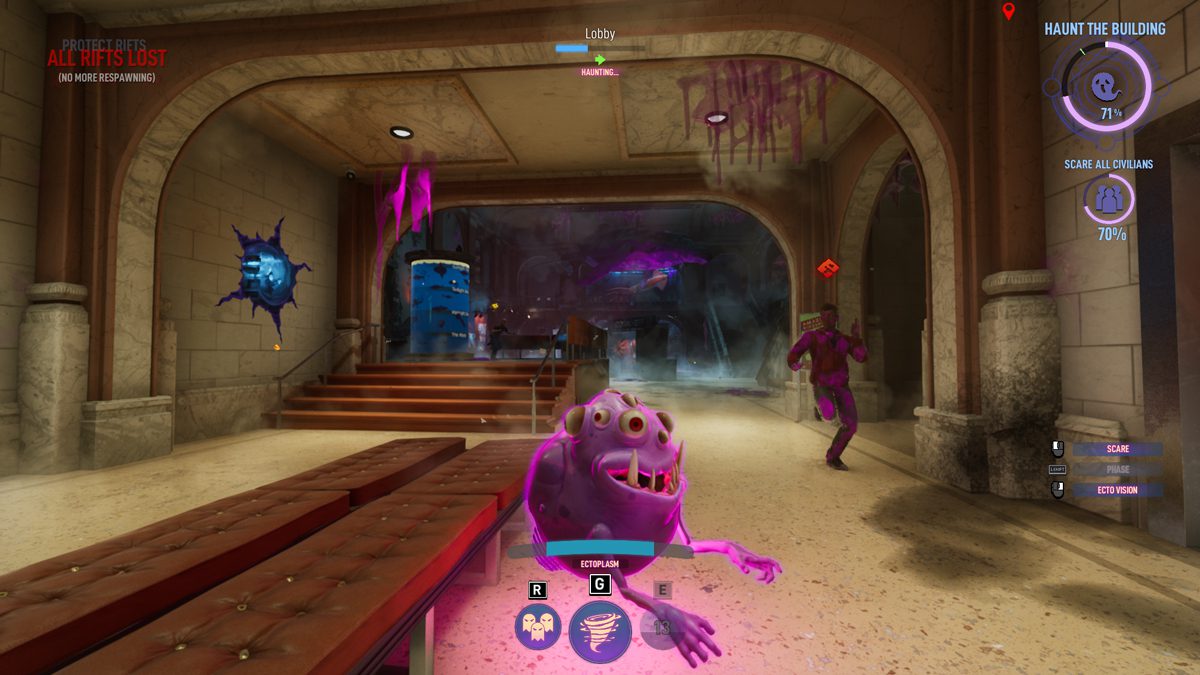 Of course, the fun of a game like this is playing with your friends. Voice Over IP is coming back to Spirits Unleashed and players will rotate into the ghost position so everyone gets a chance to be on both sides of the battle. While there will be some canon ghosts in the game, the developers stated that most of the playable ghosts will be original characters and you shouldn’t expect humanoid ghosts, like the Grey Lady, to show up in the game. I have no idea what the purple ghost was supposed to be before it died, much like Slimer, but I’ve been told IllFonic is working with Ghost Corps in the creation of this game and storyline.

I’m pretty excited to see more of what this game will have to offer when it releases later this year. I’m not a big Ghostbusters fan. I’m also not a big asymmetrical multiplayer fan. But somehow, putting those two things together has got me very interested in seeing where this thing goes.

Ghostbusters: Spirits Unleashed is scheduled for Q4 2022 for PlayStation 5, PlayStation 4, Xbox One, Xbox Series X|S, and PC as an Epic Games Store exclusive.