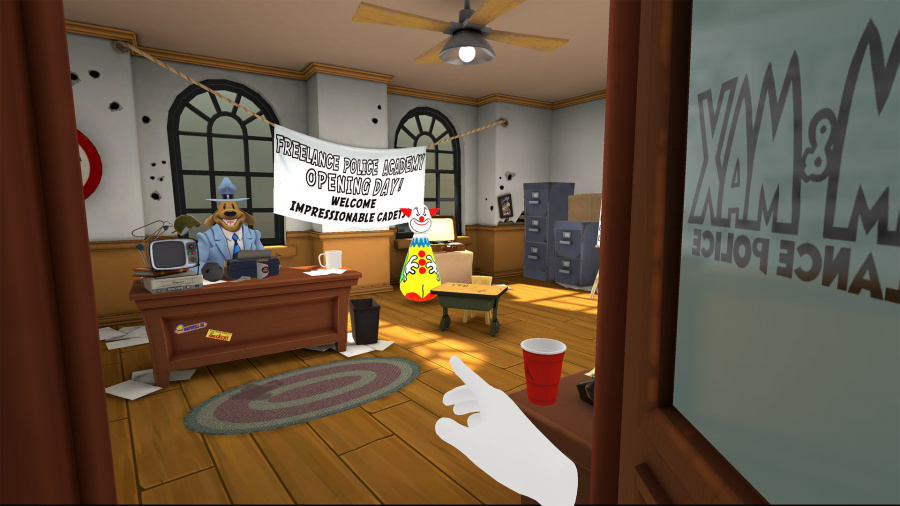 The first brand new Sam & Max game since 2010 sees the famed duo welcoming a new recruit: you. To make sure you’re up to snuff, Sam and Max put you through a series trials as you prove your worth to the freelance police. The trials wind up being a series of minigames at an abandoned amusement park and periodically, you get interrupted by a call from the commissioner, who needs your help to tackle big cases, which wind up as boss fights. That formula persists through the entirety of Sam & Max: This Time It’s Virtual, before one final showdown with a pirate tardigrade.

The minigames are standard fare: escape room, climbing, throwing, shooting, and so on. Unfortunately, with the exception of a baseball minigame that’s quite fun, they don’t offer much enjoyment. There’s a lack of polish with practically everything that tarnishes the experience: the shooting gallery fails to register shots on targets regularly, a bomb defusal challenge is needlessly hard because of item manipulation problems, and most of the challenges overstay their welcome. What could be an innocent collection of mediocre minigames is mired in a slew of technical mishaps.

The “cases” that take you away from the amusement park allow you to move about some larger spaces, but this draws extra attention to one of the game’s biggest problems: collision detection. It’s almost impossible to use regular walking because you can fall through so many of the surfaces, getting trapped in a cycle of the screen going black as it tries to reset you. Teleporting fares better, but it’s still not great. You often won’t teleport to the spot you select, instead ending up vaguely in the ballpark of your mark, making any tasks that require precision infuriating. Equally infuriating is item manipulation, as there aren’t really any measures in place for picking up dropped items. You constantly have to bend out of range of the camera because the distance you can pick things up from isn’t generous.

There is, however, one saving grace: the writing is exceptional. Sam and Max’s bevy of pop culture references and dark jokes are a near constant presence, and most lines hit their mark. The script is sharp and remarkably funny. Even with the frustrations of the game’s technical shortcomings, we couldn’t help but laugh at many of the quips, getting a good hearty chuckle at least a dozen times across the three hour adventure. The characters and the insane world they exist in stand the test of time, and it’s a lone bright spot in an otherwise frustrating endeavour.