Monark starts off with very little preamble. Within about ten or so minutes, you’re already battling, already meeting major characters, and already seeing some dark story developments. It starts out with a lot of great ideas.

The disappointing part of Monark is that it struggles to keep that initial luster over the course of its run. It has some real great moments, like big boss battles with tailored tracks, surprising story twists, and a fairly deep and interesting combat system. It’s the hours of necessary grind, repetitive environments, and narrative stumbles just can’t keep pace.

Monark is a new RPG from Lancarse and FuRyu, with some help from a few former Shin Megami Tensei developers. It’s got the vibe of an SMT game; Shin Mikado Academy has been cut off from the outside world by a magical dome barrier, and inside, a mysterious mist is flooding the grounds, driving students mad. Amid a lot of horror are Pactbearers, individuals who’ve made a deal with the patron deity of one of the seven deadly sins to see their wish fulfilled. It’s a bad time to be a normal, everyday student at Shin Mikado.

You awake as an amnesiac student and are plunged into the Otherworld, an alternate dimension where demons manifest. In a last-ditch effort to save some friends you’ve just made, you make a Pact with the demon Vanitas, becoming the Pactbearer of Vanity. Everything settles down after you slay some demons, but then the dean of the school arrives and reveals the facts: to erase the mist and return everything to normal, you’ll need to defeat the other Pactbearers—and eventually, yourself. 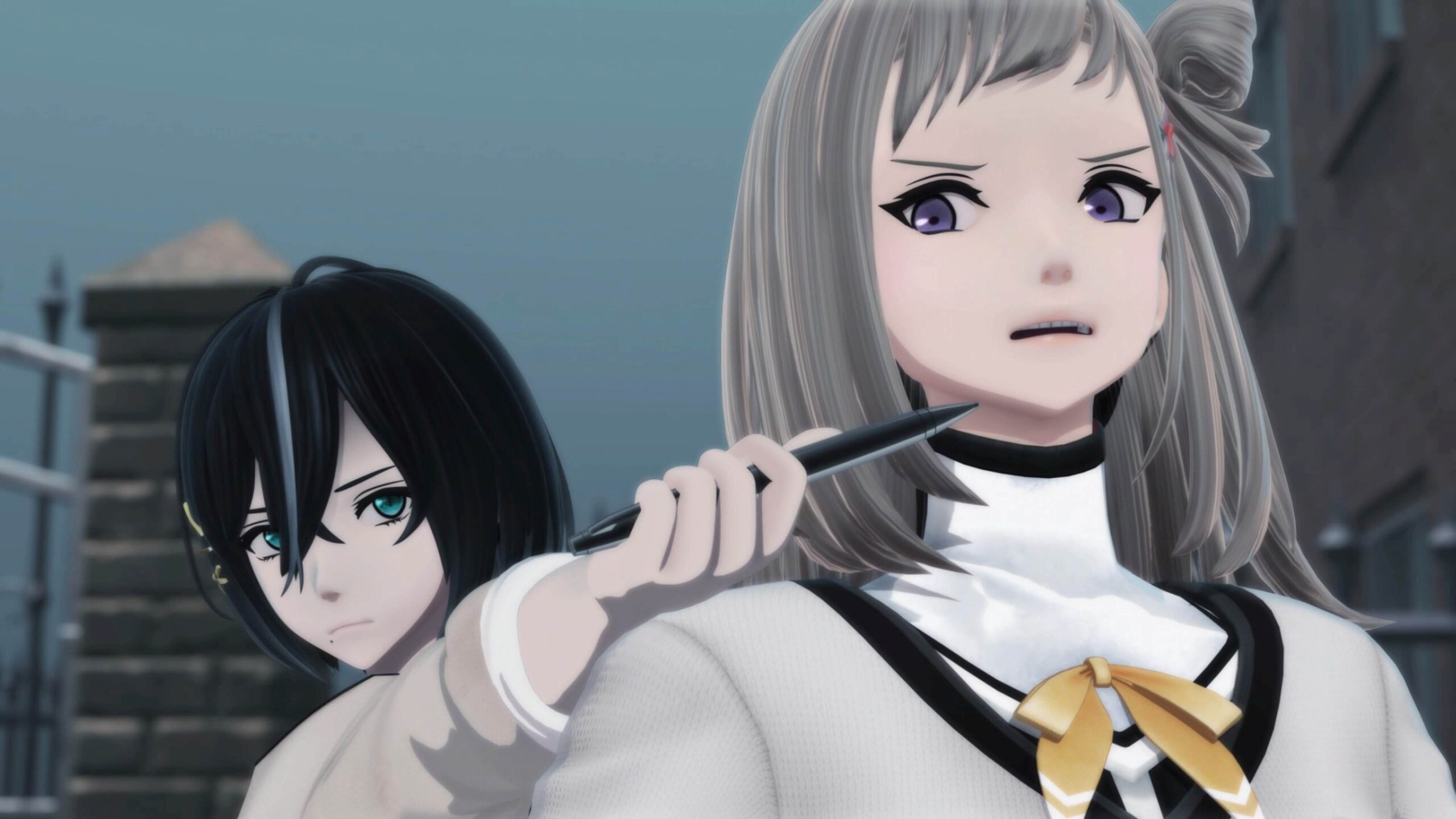 Monark‘s setting is one of its biggest strengths. While an RPG set in a school might not be novel, the mist and Pactbearers—who can use their Authorities to change the real world—make for a creepy, horror-tinged world to explore. Breaking the Pactbearers means going into the mist to find points where your cell phone can connect to their Ideals in the Otherworld, all the while avoiding maddened students and watching your own sanity drip away, tick by tick.

There’s a new horror around every corner at Shin Mikado, and gradually dispelling the mist and restoring the halls and its students to normal feels good. It doesn’t help much that the hallways are all pretty same-y, and the school grounds are limited in scope. But as a contained setting for an RPG, it feels like it serves its function to the story well.

When you’re not exploring the mist, you’re battling, and that’s one of the main drawbacks of Monark. The actual combat of Monark is very interesting. Your party is made up of you, whichever human companion is accompanying you on this excursion, and fiends that embody your own desires. Personality quizzes interspersed throughout the story and around the campus basically Myers-Briggs your own desires onto a chart, graphing your attunement to the seven deadly sins. 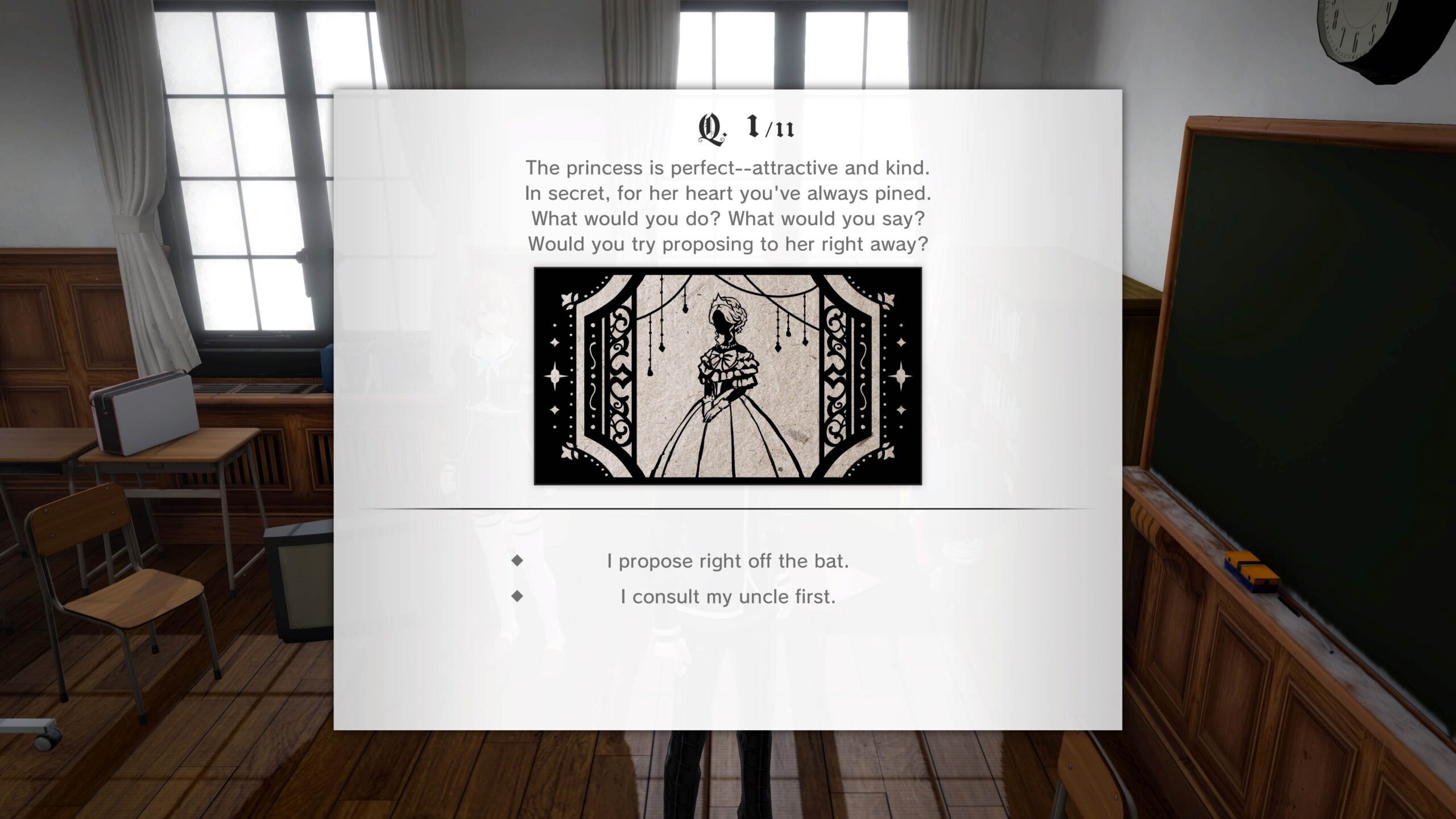 Because my first test revealed a desire for power, and wanting to claim it for my own, I was given a familiar of Gluttony. Throughout the story I’d accumulate Pride, Sloth, Lust, and Wrath too. They don’t just act as representations of your own answers, but their gameplay matches their vices; Gluttony is adept at stealing buffs for itself, and Lust could Charm enemies to my side.

Battles are tactical, with each of your characters moving and then acting, waiting, or deferring their action to another unit. Deferrals are crucial, as they provide you with extra turns, letting you heap on damage and rack up multiple hits if units are nearby to toss in follow-up attacks.

Deferrals also rack up Madness, which can also be driven up by using your Authority powers. Hit 100% Madness, and a character will go berserk; they’ll get increased stats, but you’ll lose control and have to watch them hit anything (friend or foe) until they eventually pass out. Balancing this out is Awakening, a meter you can charge up to reach an ascended state, providing stat buffs, access to special moves, and wiping the Madness slate clean.

On top of that there’s Resonance, your own protagonist’s ability which can share buffs and states across units including Madness, Awakening, and Enlightened, which only turns on if you hit 100% on the former two at the same time. It is a lot. 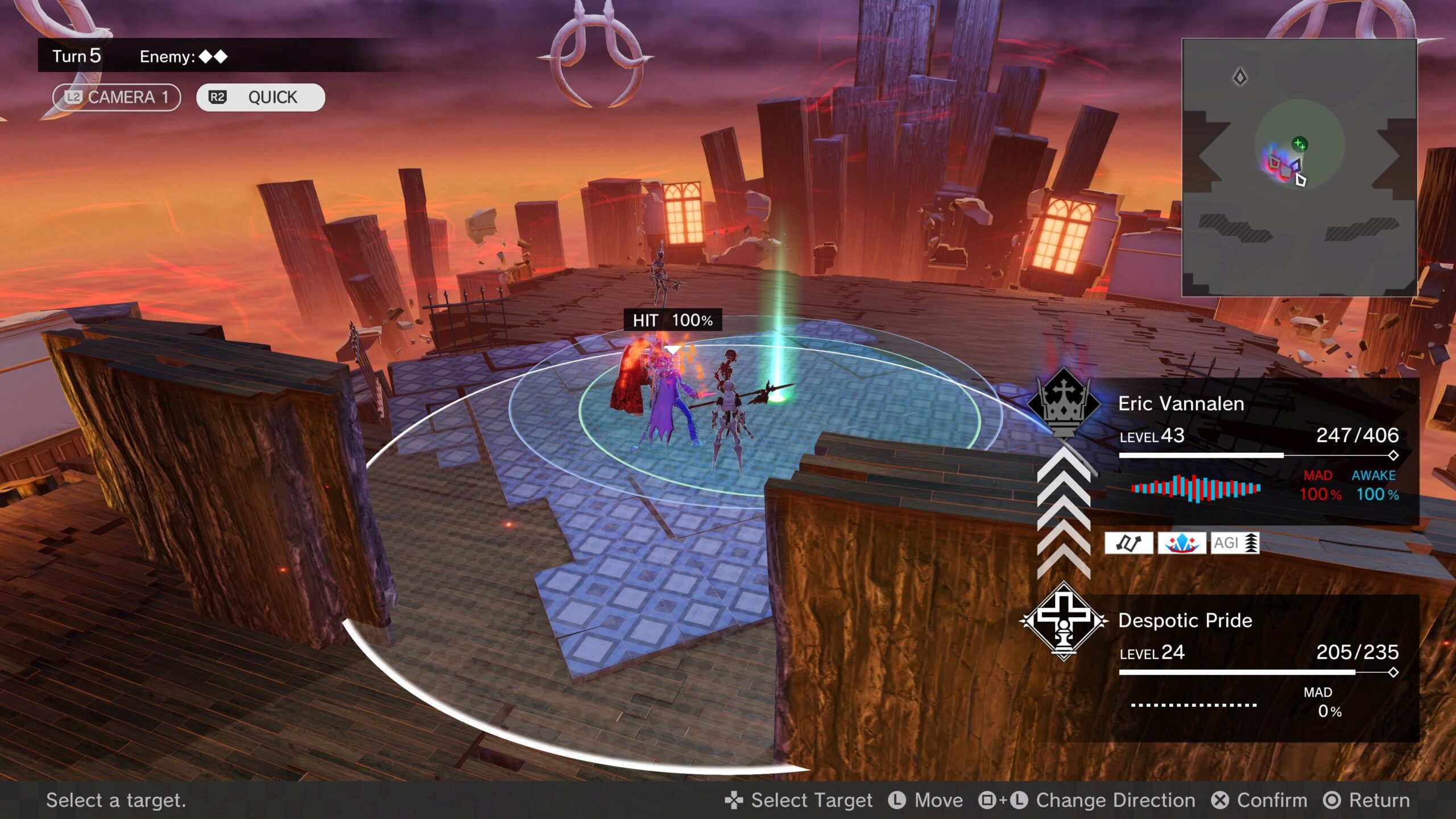 What’s nice is that Monark‘s many systems don’t feel too overbearing. There were certainly a few times I accidentally went Mad or didn’t set my deferrals up quite right, but when it’s humming, Monark battles feel like a good mix of predetermined strategy and on-the-fly adaptations. Getting a ‘perfect turn,’ where your whole party hits Enlightened status and goes wild on the enemy, feels great.

Less than great is how often you’ll be doing all of that, because Monark is a grind. Mandatory battles are sparse, but the level floor for each one jumps up higher for each new slice of story. Leveling up a character means spending Spirit, a universal currency that everyone shares, and upgrades are costly compared to how much you usually get per-battle.

It wasn’t uncommon to spend at least a couple hours between each new story beat just grinding out battles. This could be fine on its own, but efficient grinding usually meant playing one map over and over again. Enemies have some interesting moves, but for the most part, they fall under a small number of categories. Arenas all look the same, and outside some breakable walls and environmental hazards, terrain was rarely a concern.

So many hours of my Monark playthrough were spent in one arena, repeating the same actions over and over. It wasn’t long until I had enabled most of the quick movement options just to speed it all up, and I was still dreading each new beat and how many more runs of the Precipice of Wrath II arena it would entail. 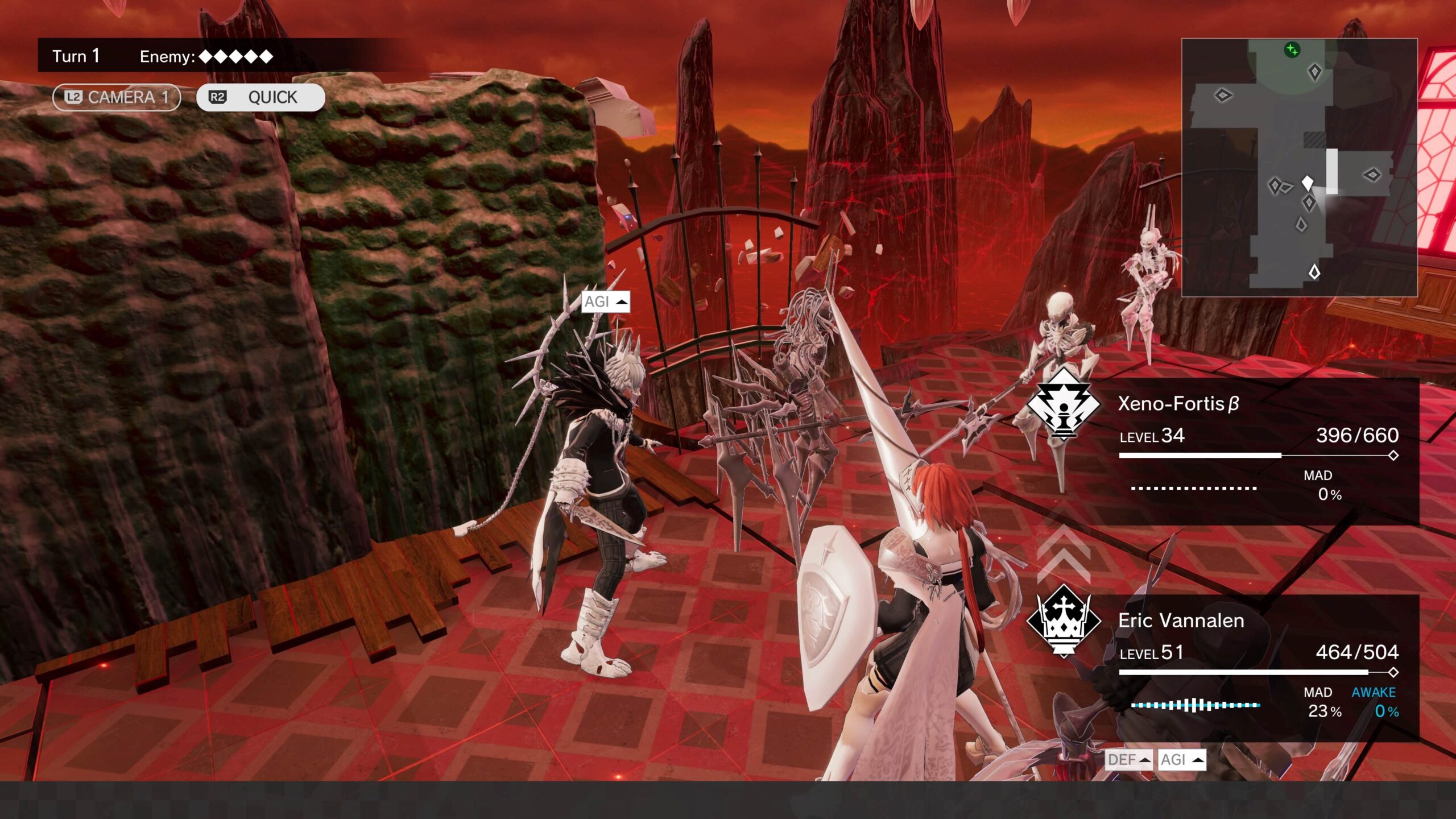 Even when many RPGs might also demand grind, they offer a little more variety, and the ratio of story-to-grind tends to feel a bit better. That ratio is skewed towards the latter in Monark. There are some interesting threads it builds up, as Monark tries to tackle issues like bullying, guilt, grief, and heartbreak. It also veers wildly off-course on some of those, in fairly odd ways.

Some of those writing misses aren’t helped by how staggered Monark feels. With both necessary grinding time and a penchant for stopping in hallways so your human companion can monologue a bit about their backstory, each Pactbearer’s section feels way longer than its story might suggest.

Characters are introduced, and then siloed off to their respective arcs. This isn’t really a “party” RPG, but one where you’re picking companions after spending one introduction story with them. It was hard to develop a real attachment to any of them, and even characters I dig like Ryutaro and Nozomi feel short-shifted by the pace of the narrative. 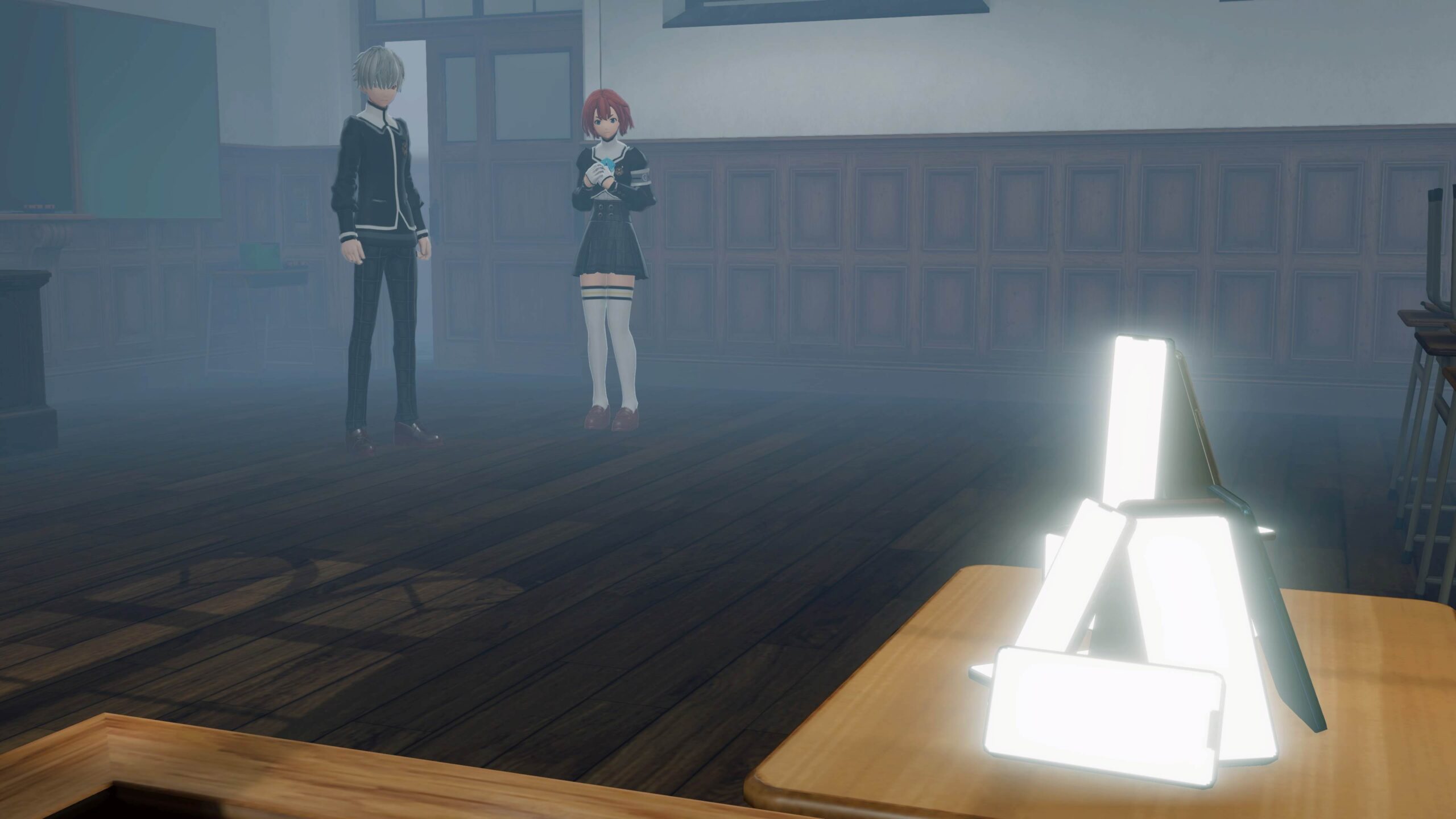 It’s a shame, because the music and character art of Monark is wonderful. Portraits really pop off the screen, and both the regular tunes and special boss fight songs are absolute stand-outs. The 3D world doesn’t always have the same draw, especially in the Otherworld. But there were areas of mist, especially later on, that were real spine-tingling sections.

By the time I finished a run-through of Monark, it felt like I’d climbed uphill to find something at the top. And oddly enough, even the individual endings feel like a bit of a gut-punch. You’re basically told to go back and play other routes, to discover a ‘true ending.’ But by that time, I felt I’d seen enough of what Monark does. It was like asking a mountain climber, at the top of the summit, whether he’d like to jump right back to the bottom and do it again, right now.

Monark has a fantastic universe, with art and music to match. Some of its story beats are solid too, and even when a couple missed, others were suitably dark and dreary. Its cast even has some fun moments and emotional hits, though I preferred a few over others. And its combat is a really fascinating, engaging system that feels like spinning plates in a good way. 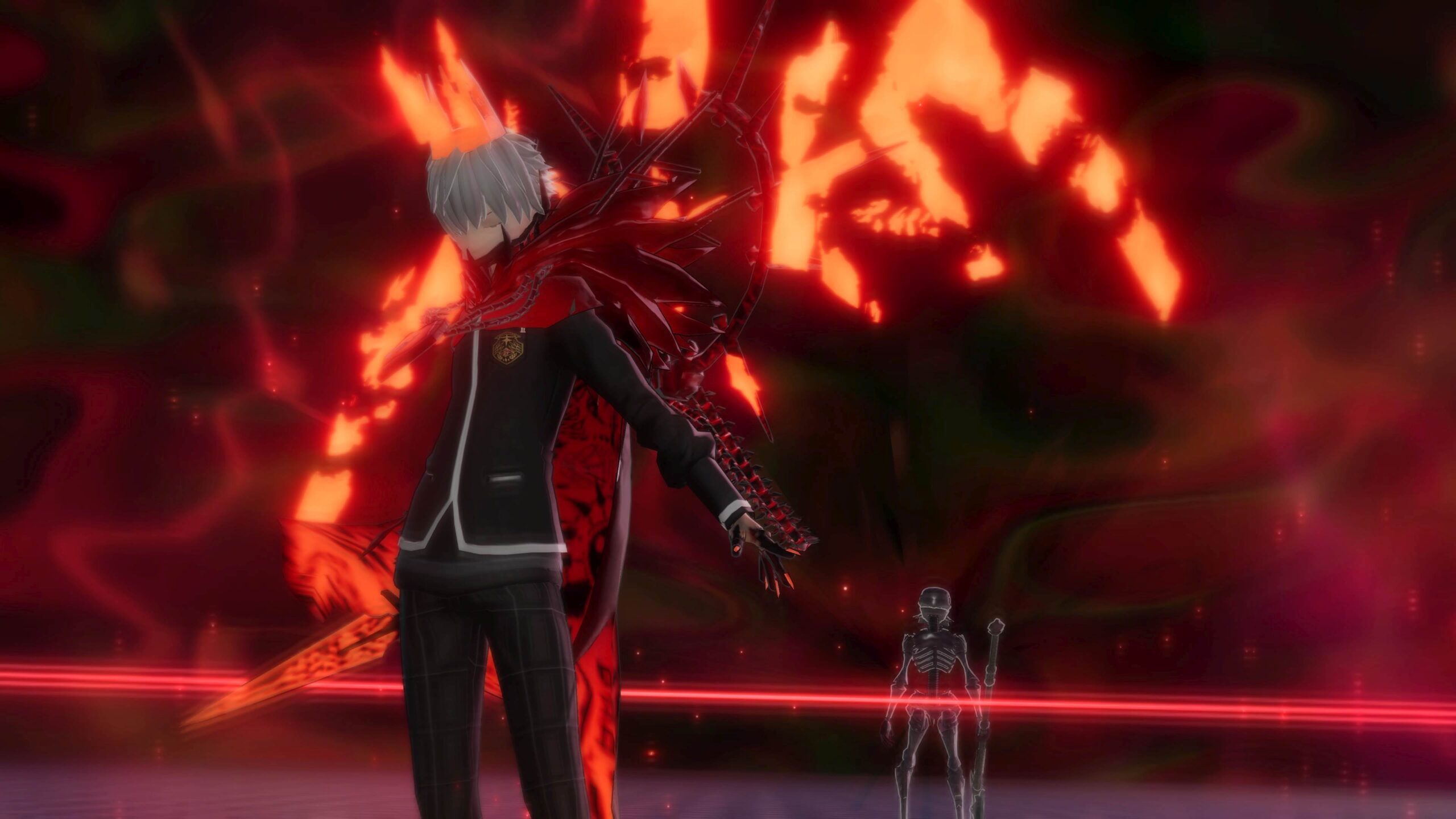 I just can’t get past the grind. I can’t push through the glacial pacing it imposes, the constant starts and stops, and the same arenas over and over. Every time I started to get invested in Monark, I was blasted back down into another few hours running the same fight, over and over, for whatever Spirit it might give me.

There is enough here that I’d give a Monark follow-up a shot. One that fills out its stories a bit more, amps up the horror, and flattens out the grind. There are some novel ideas here, and if you’re looking for something outside the RPG status quo and with a darker vibe, Monark could fit the bill. Just go in knowing that it can get arduous, and you’ll need to overlook those faults to find what Monark does that’s really different.

How To Get Gold Faster

Here are some demos to play – Destructoid