For a long while I wasn’t sure what to think of Ghostwire: Tokyo. The marketing made it look like it lacked personality, and it wasn’t until I actually got to play it for myself that I started to see its potential and what it was going for.

Having finished it I’m still a bit torn, but I think a lot of people are going to dig it: especially if you can get past some of the traditional open world design and peel back the layers within. 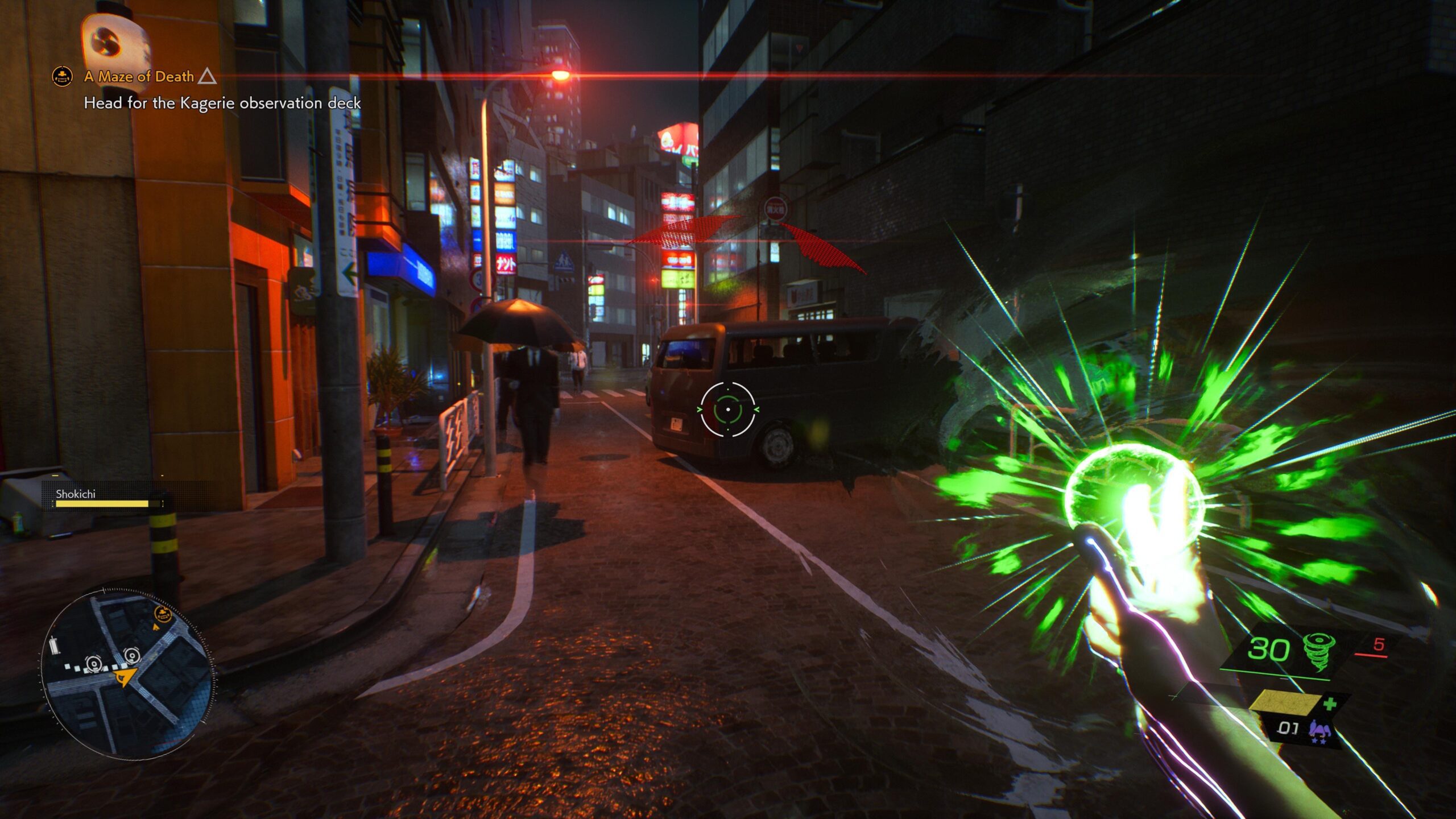 Leading up to Ghostwire, most of the marketing was bent on the “mystery” angle, but a lot of that gets dispelled quickly: in a good way.

Our hero Akito (possessed in part by a spirit named KK) shows a lot of emotion right out of the gate, and has a purpose beyond the general “what is going on” macro-narrative. While the simple fact that nearly everyone in Tokyo is missing due to some apparent supernatural cataclysmic event is kind of important, we do get to go on a personal journey as well. The adversarial relationship between Akito and KK reminds me of War and The Watcher from Darksiders, and gets really catty at times. It’s great.

Developer Tango Gameworks recommends playing Ghostwire with Japanese audio, and I have to agree. While the English dub is fine (and available day one baked into the game), the Japanese voice cast is clearly the focal point, and it helps augment the unique feel of Ghostwire. Just like the Yakuza series, it’s refreshing to see a game about Japan made by a Japanese game studio. While there are Tengus to grapple on and fling yourself into the air (and other fantastical elements), Ghostwire‘s architecture and foundation is grounded.

It is limited, though. There are many places you simply can’t go (and little in the way of Yakuza‘s eccentric minigame dalliances), and a lot of the fun with the traversal system involves hopping around rooftops with a light glide mechanic. Ghostwire has a lot of open world staples to boot, which can be a boon or a burden depending on how you look at it. “Cleansing gates” (to unlock more of the world and create more point of interest icons on your map) is a clever way to deal with radio towers, as there’s (with few exceptions) no climbing required. There are a lot of pins to sift through, but not a cynical amount, and side quests mostly offer a unique angle or thread rather than a series of dull repeated concepts.

The whole “everyone is gone” angle is a genius way to avoid having to render myriad open world bystander models, and creates an eerie effect that’s seldom seen in a lot of other open world games. But like several other elements of Ghostwire, it’s give and take. While there are NPCs (mostly in the form of spirits and cat vendors), they’re few and far between, and enemies are the main bodies you’re going to be running into most often. Which leads me to some of the more polarizing elements of Ghostwire: enemy variety. It starts off in a low spot and never really escalates from there with much urgency.

Early game enemies mostly all look the same, with two core variants: salarymen Slender Man stand-ins with umbrellas, and headless school girl creatures. As you progress you’ll get to see more and more variants (little raincoat-wearing patrols that summon more foes, giant scissor demons straight out of a classic Capcom horror game), but the core boots on the ground enemies can mostly be defeated in the same manner. Occasionally you’ll encounter a yokai (in the tradition of Japan) or a boss fight; which just had me daydreaming about a version of Ghostwire where every enemy was a starkly different yokai. There’s a universe where this game is more insane with the same basic mechanical groundwork and I want to be there.

The elemental combat system mirrors traditional weaponry, but with a “flinging spells out of your hand” spiritual angle. Your core tools involve ranged attacks, starting with the wind variety, and eventually, more traditional elements that have different functions. Akito also gets a bow and arrow early, on top of a few items like stun talismans; and he can melee (with the primary function to leech ranged ammo), sneak up and use stealth kills, and block with an energy barrier. Standard stuff, but very flashy looking, including on a PS5, where the particle effects look fantastic. I’m thankful that the ability to swap between visual and performance modes (of which there are several) is basically the norm now. 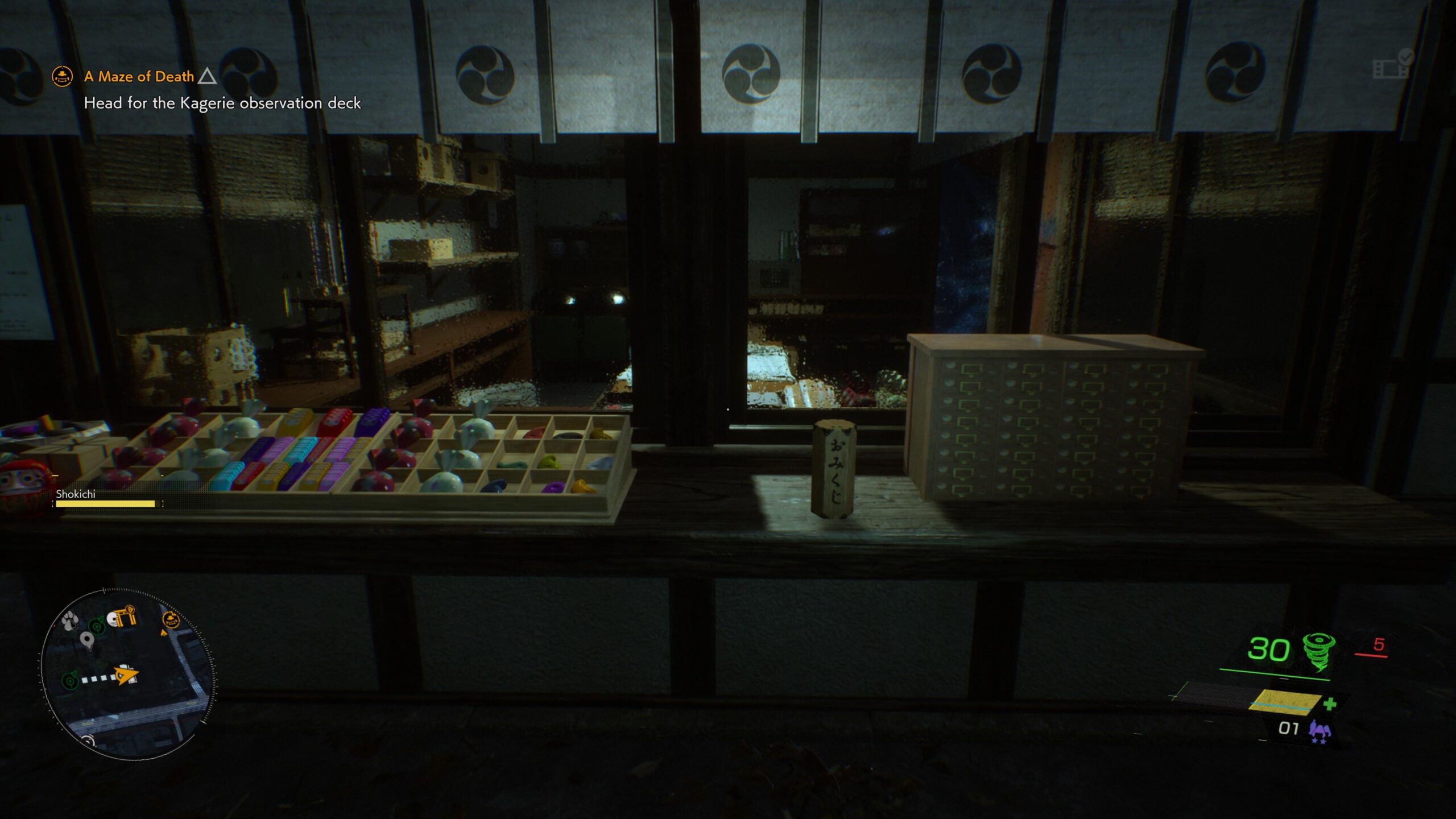 The more you level up and progress with the story, the more tools you’ll get, including weird things like spirit thickets that you can throw down to create a makeshift stealth wall. This whole system is functional at worst, but I wish that the team leaned more into the weird angle than the elemental system that basically replicates different types of weaponry (like a shotgun spread [water], a rocket launcher [fire], or rifle [wind]). In other words, more thickets, less bows.

Again, all of this is serviceable at worst, and the level-up system is very slick, helping lift me out of a routine the more I progressed. When consumed, food also ups your maximum HP by a very small amount, which was tough to get used to (normally I’m into saving consumables), but did a great job of getting me to become more actively engaged with combat, even sliding the difficulty up.

Whenever I faltered, where Ghostwire consistently won me back is through its visual style and general theming. While The Evil Within was arguably a more uneven game, you can see a lot of its influence in Ghostwire. There are a lot of moments of disorienting shock, where the entire game state is crumbling around you like you were playing Eternal Darkness on GameCube. But now Tango has the benefit of hindsight, eight years of additional design experience under their belt, and the power of modern devices.

Ghostwire is constantly throwing very cool looking Lynchian horror split-reality scenes at you, usually during tense moments involving a timer of some sort or a story moment when someone is yelling at you. The game consists of many peaks and valleys, with chill open world exploration followed by a lot of tense moments. A lot of people will find the pacing to be jarring, and it is! 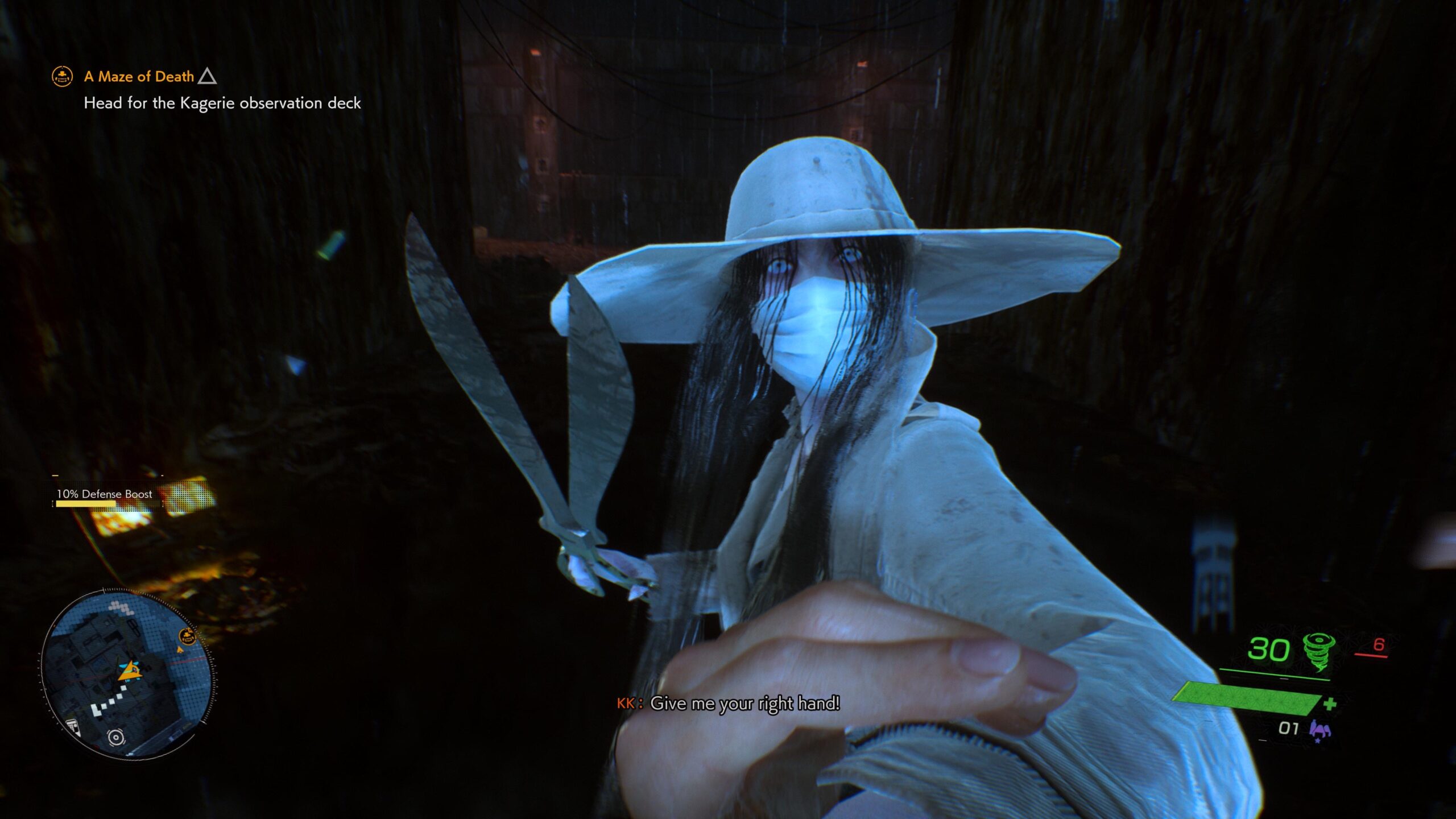 Occasionally Ghostwire will get silly, whether it’s through sidequest storylines, the animations of lazy floating cat vendors, or selfie pose/outfit unlocks. A lot of that is bubbling underneath the surface though, clashing with the more dramatic beats of the story and the straightly-played horror elements. What you get in the end is a project where you have to somewhat work to see a lot of the quirkiness underneath the sometimes standard open world veneer.

In another world, Tango Gameworks could have potentially stopped making games; but with a fresh new start under the umbrella of Xbox Game Studios, I’m anxious to see what they have in store for us. Ghostwire: Tokyo isn’t for everyone, but it gives us a glimpse into what Tango is capable of, and I hope they push the envelope a little further next time.