Well slap my hand and call me incompetent, this is something I didn’t ever expect to see. Getsu Fuuma Den was maybe a rather popular Famicom release back in 1987, but it wasn’t as landmark as the previous year’s Castlevania. Furthermore, it never landed on North American shores and was never localized into English. Further than that, Konami stopped caring about their massive catalog of amazing titles and their fans in general, so why would they get their hands dirty digging for this old gem?

But here we are, GetsuFumaDen: Undying Moon. A franchise dug up from the depths of Yomi to once again walk the earth. Sort of. It’s a Roguelite, which probably just gave a lot of you pause, as it did for me. Let’s ignore that for now, and return to our blind optimism. 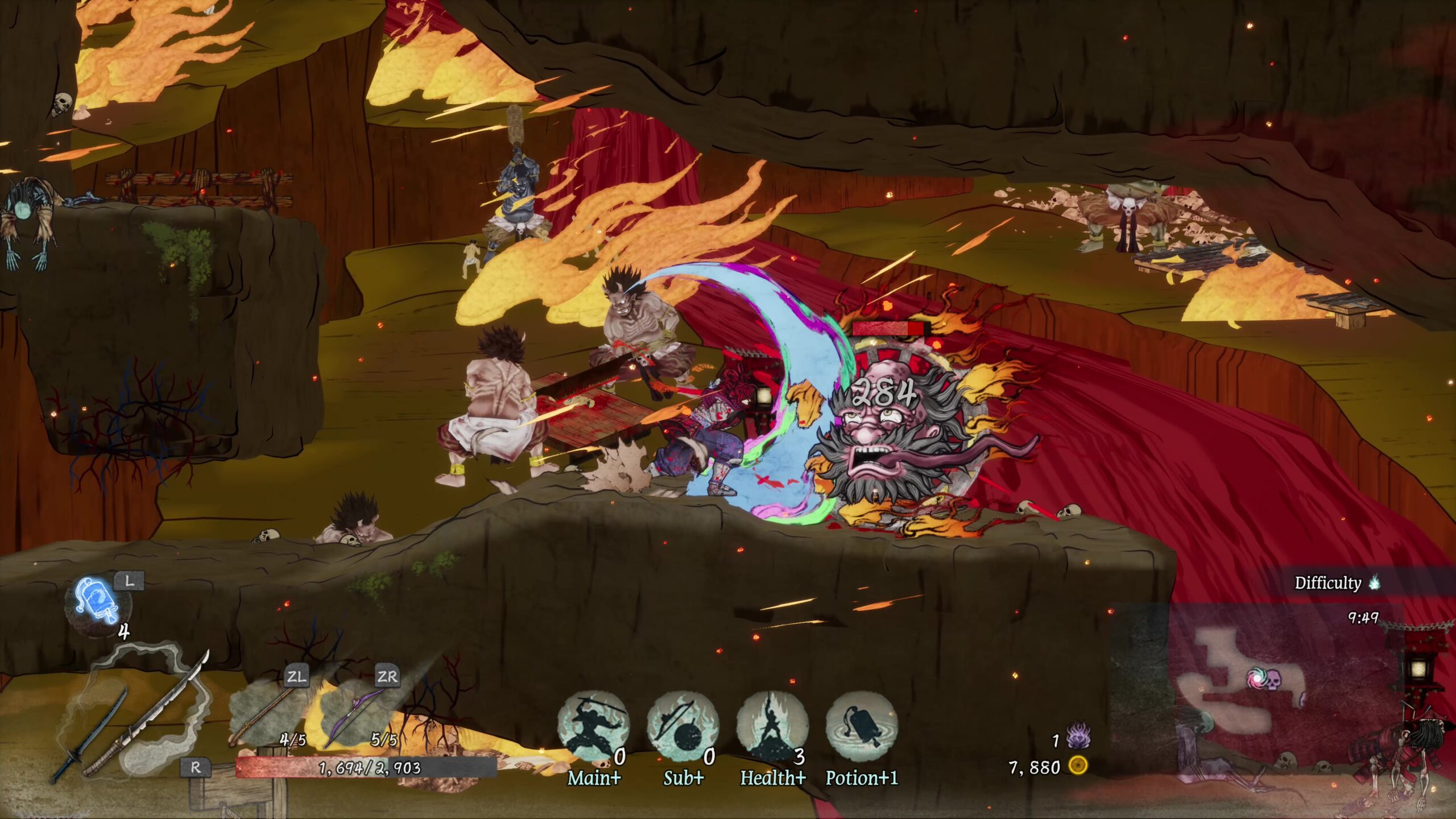 Getsu Fuuma Den wasn’t the greatest game, but it was memorable. First of all, the overworld theme is easily as memorable as some of the system’s best. Secondly, it did the Zelda II thing and tied in an overworld to its side-scrolling levels. Finally, there are these third-person dungeon crawler sections. There are RPG elements, and although the controls are ridiculously floaty, it’s a pretty decent time. I feel a great deal of warmth when I think about it.

GetsuFumaDen: Undying Moon has more in common with Dead Cells than it does with its Famicom predecessor. It will definitely feel familiar to anyone with experience with Dead Cells. I get it. It’s difficult to make a non-Metroid-style, non-Roguelite, 2D platformer these days. It extends gameplay from a handful of levels to an endless number of permutations. The formula forces you to replay the game multiple times to truly complete it. There isn’t a whole lot of space in the industry for a classic 2D platformer. We’re lucky to have things like Bloodstained: Circle of the Moon, I guess.

There’s not really any story connection between GetsuFumaDen: Undying Moon and its predecessor. It’s not the story of the last surviving brother of the Getsu clan trying to reunify the Hadouken (not Street Fighter’s “wave motion fist,” but rather the “wave sword”) and defeat demonic forces. Instead, this universe’s Getsu Fuuma ventures into Yomi to try and reseal the realm before it takes over the surface. Potato, potato.

Let’s get something out of the way: the art is absolutely amazing. It deftly brings to life Ukiyo-e depictions of the Japanese underworld while still introducing the bizarre art style of the Famicom not-quite-classic. It can get a little busy at times to the point where it’s difficult to discern things in the environment, but it never stops looking amazing. Damn!

The gameplay is just fine, though. It plays like a clone of Dead Cells, and that’s it. Period. End of review.

Okay, not really. There are no health pickups in the environment. You’re at the mercy of your stock of potions. The mechanics are also more rigid. There are a select few genres of weapons, and each improvement works like another. The war fans are exactly the same as the dual swords; they’re within the same class. I find this agreeable because when your weapons are doled out randomly, it’s nice to just grab the class you’re most comfortable with. 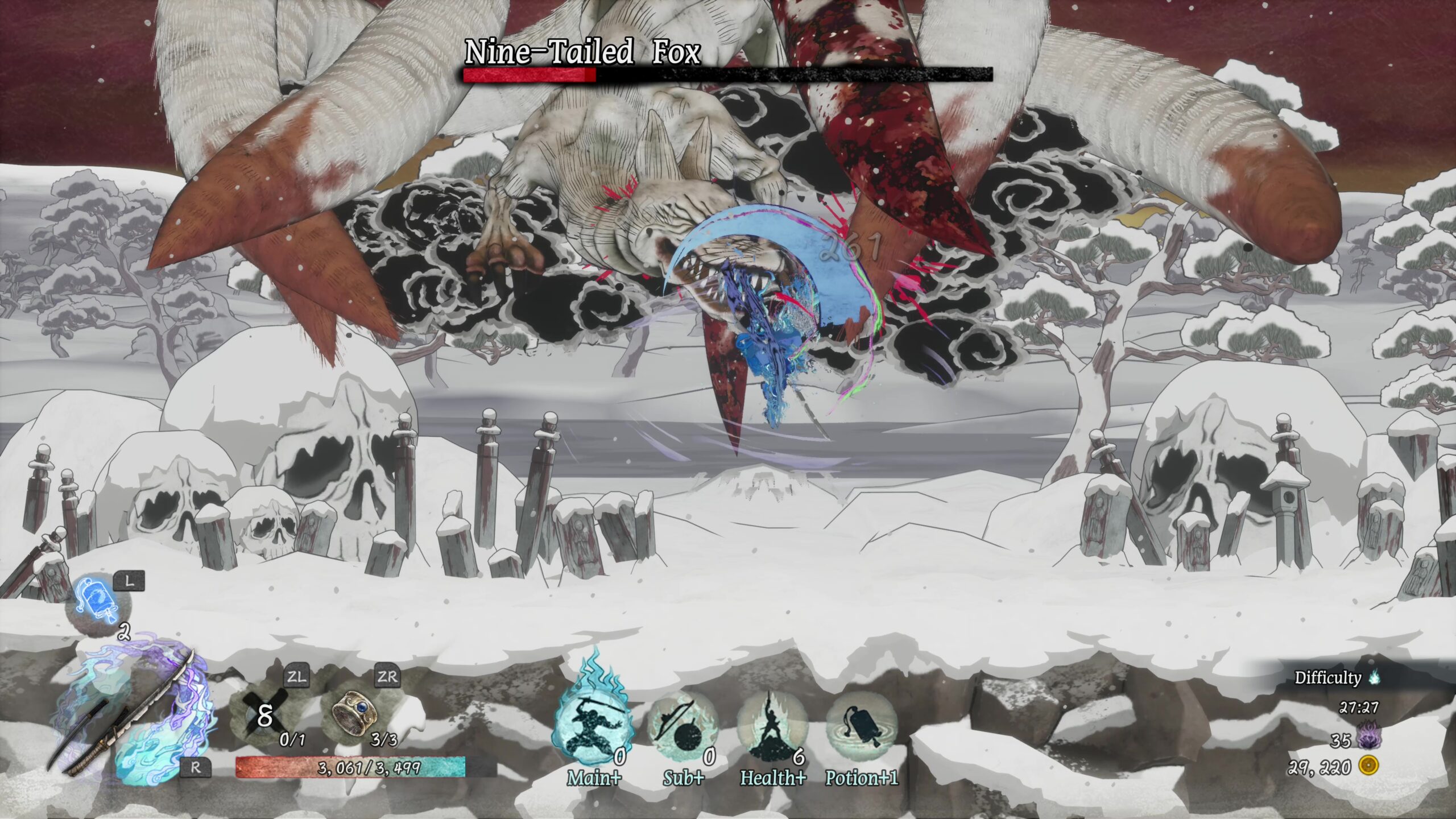 Allowing you to get further and further into the game is a progression system where you upgrade your weapons and bad self. Not the most remarkable mechanic and one that is handled in a rather average way. You collect stuff from dead enemies, and you use it to buy upgrades. That’s fine; you get to beef up your favorite weapons and then hope that they drop in your playthrough.

However, progression in GetsuFumaDen: Undying Moon is ridiculously slow. At the end of every stage, you are given the option to return to the Getsu Estate and bank your goods at the expense of having to start over. Some upgrades allow you to bring stuff back with you, even if you die, but until you’ve gained enough items to get those upgrades, it’s a paltry sum. Yet, even if you’re spending everything safely, it takes a long time to fully upgrade even a single weapon.

And that’s even if you manage to find them because weapon plans are dropped randomly from enemies. You’re given a choice of path to the end through a selection of levels, but most levels are locked off until your find an omamori that opens the path to another. Those keys? Also randomly dropped. Hoo boy. 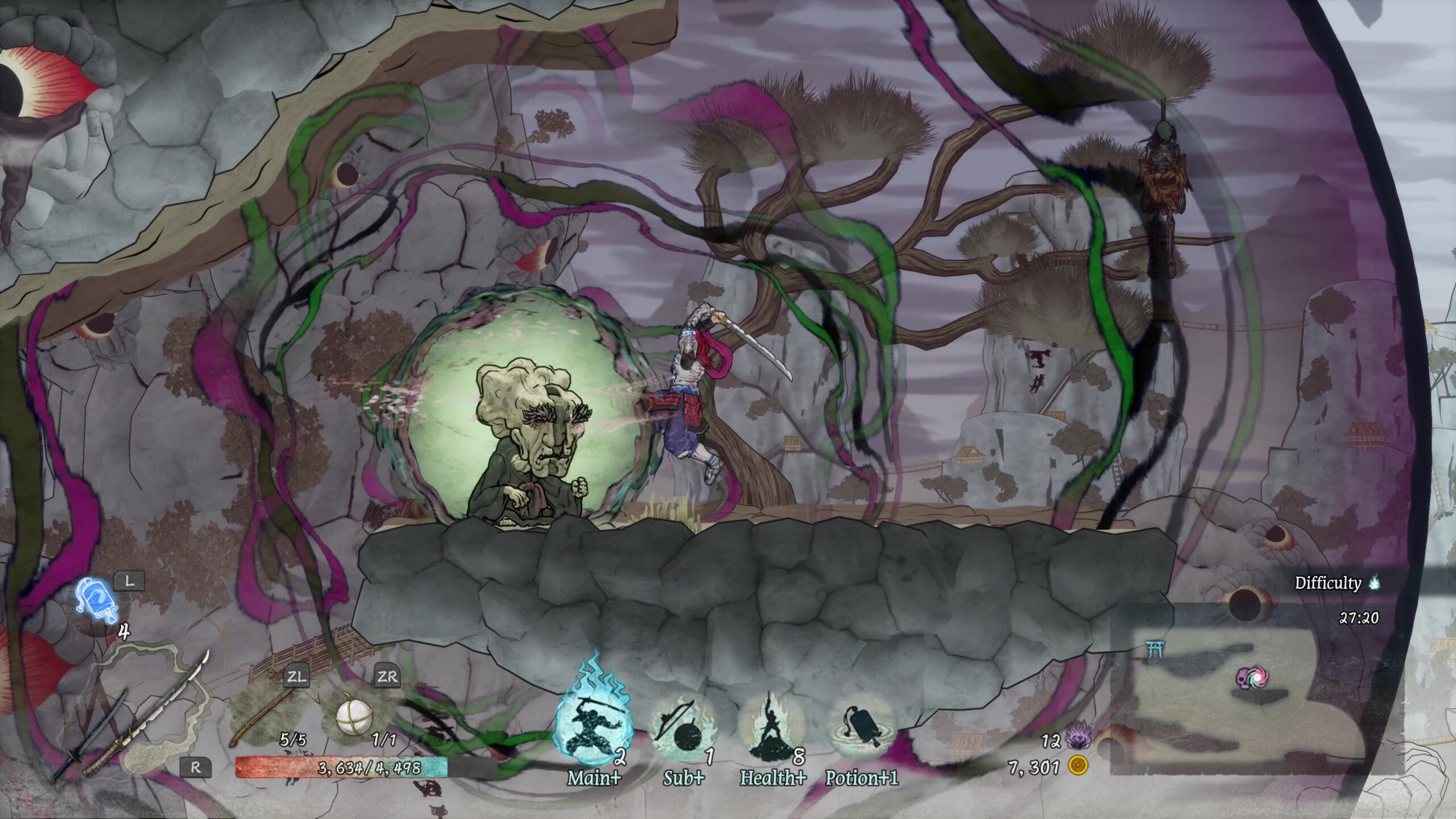 This means it can take many playthroughs to see all of Yomi, and it can be quite painful. The bosses are reasonably fun to fight, if only because they resemble your typical platformer bosses only in GetsuFumaDen: Undying Moon’s incredible art style. However, perfecting your strategy against them can also mean a lot more playthroughs.

Yes, with GetsuFumaDen: Undying Moon being a Roguelite, that already implies multiple attempts, but a run here can take upwards of an hour. Then you die, you make no progression, you’ve learned nothing, and you didn’t unlock a level to break the monotony at least a little bit.

To be fair, it only took me about 10 hours to come up with a strategy to topple the game at its lowest difficulty, but that involved a lot of heartbreak. It’s not the most difficult Roguelite I’ve encountered, but it is one of the slowest to progress through. 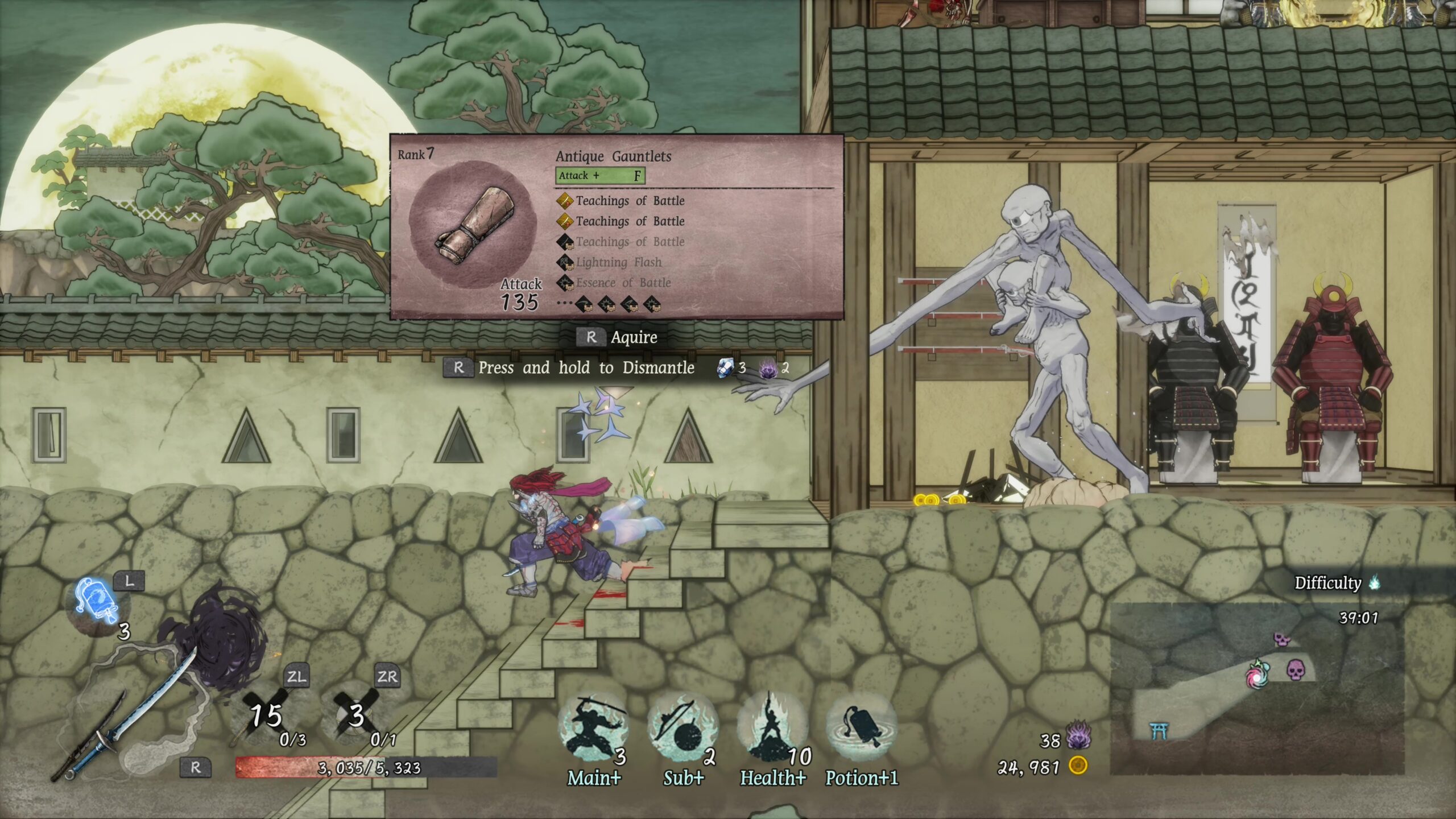 That’s not to say that GetsuFumaDen: Undying Moon is bad. It didn’t succeed in completely killing my enthusiasm for a new game in a forgotten series. No. It just made me want a deeper, more polished experience, and that’s not the worst thing for a game to do.

Even the music; they eventually do break out Ike! Getsu Fuuma, and it’s a decent remix… until there’s this weird breakdown in the middle of it. Then you suddenly wonder if you’re listening to a remix of the remix.

Still, there are worse things a game can do aside from making me wish it were something more. I shrug and have to wonder what else could be done with the license aside from a pretty Rogue-lite sidescroller. A Metroid-style explore-’em-up? Actually, that does sound way better. This is just a clone of a better game overlaid with an absolutely boss art style that I could stare at all day. Not necessarily worth exploring Yomi’s half-acre, but not a total waste of a visit.

I also want to note that the deluxe edition of GetsuFumaDen: Undying Moon comes with the original Famicom Getsu Fuuma Den. However — and I must stress — only the menus are translated into English. The copious amounts of Japanese text that was in the Famicom original have been left untouched. Thanks for nothing, Konami.

Best ways to get Shillings