I guess I’m getting sort of a reputation. When I notified the composer of Dialtown: Phone Dating Sim that I picked it up for review, he responded by saying “we appreciate you checking it out since you’ve reviewed other dating sims in the past!” So? What of it!? What are you implying?

Yes, I am Destructoid’s resident dating sims expert, but Dialtown kind of entices me with a different set of possibilities. I looked at the screenshots provided in the press release and calling it a “dating sim” is implying that’s the main draw. No. Dialtown is a wreck. It’s like finding your kitchen has been ransacked by children and they’ve taken all your eggs and pancake mix to create some sort of horrible batter golem. Your first thought isn’t likely to be “how does it taste,” but rather “what have you done!?” You are a green-skinned, six-nippled cryptid that needs a date to get into the funfair and lay your eggs in a squalid hole. Coincidentally, Dialtown is about exactly that. Hoooo Swish! You’re left to wander the town, searching for anyone desperate enough to want to date a freak like yourself.

That’s true romance, isn’t it? We drift along until we find someone who’s maybe sort of tolerable and can overlook our excessive flaws. Then we latch onto them and suck them dry like disease-spreading parasites. If you think about it, marriage is just a way to add legal repercussions in case someone tries to get away. A holy union. One that reeks of desperation when you really consider the implications.

Anyhow, Dialtown is a dating sim of the “romantic visual novel” variety, and it’s really tempting to throw “romantic” into another set of quotation marks. You don’t have a schedule and make no effort to improve yourself in any way, not that you would. You just make choices that affect who you get with and whether you succeed or they shoot you dead. The game helpfully drops prompts that tell you when you’re making a course-changing decision, so you can stick a save point there and undo your critical mistake later.

You get to choose your pronouns and your face (typewriter or telephone), and characters only have preferences based on the shape of your head. Which is great, because what I have between my legs shouldn’t matter to a fictional character.

The dialogue was familiar, almost like it’s from conversations I was part of. This unique type of cynical, self-deprecating absurdism where everything terrible in the world is dragged out and we all have a good laugh at our own expense. It took me a while, and then it hit me before fully engulfing me like a sack of sentient sourdough.

Dialtown sounds like a conversation within the Destructoid community.

Have you ever had the courage to wander into the QToid section of the site? It’s equal parts wondrous and terrifying. But the steadfast community that has latched onto Destructoid shares this unique language that I can only define as dirt. It’s gritty, it gets everywhere, and it can cause lung problems if you breathe too much of it in. It’s not malicious, but its tastefulness is sometimes pushed recklessly far. You’re more likely to fit in the more devastatingly and absurdly you can put yourself down. Or maybe if you just have some rocking Warhammer models. Or maybe you just like video games.

That’s what Dialtown sounds like: Dirt. Dialtown is complete dirt, and I think it would take that as a compliment. 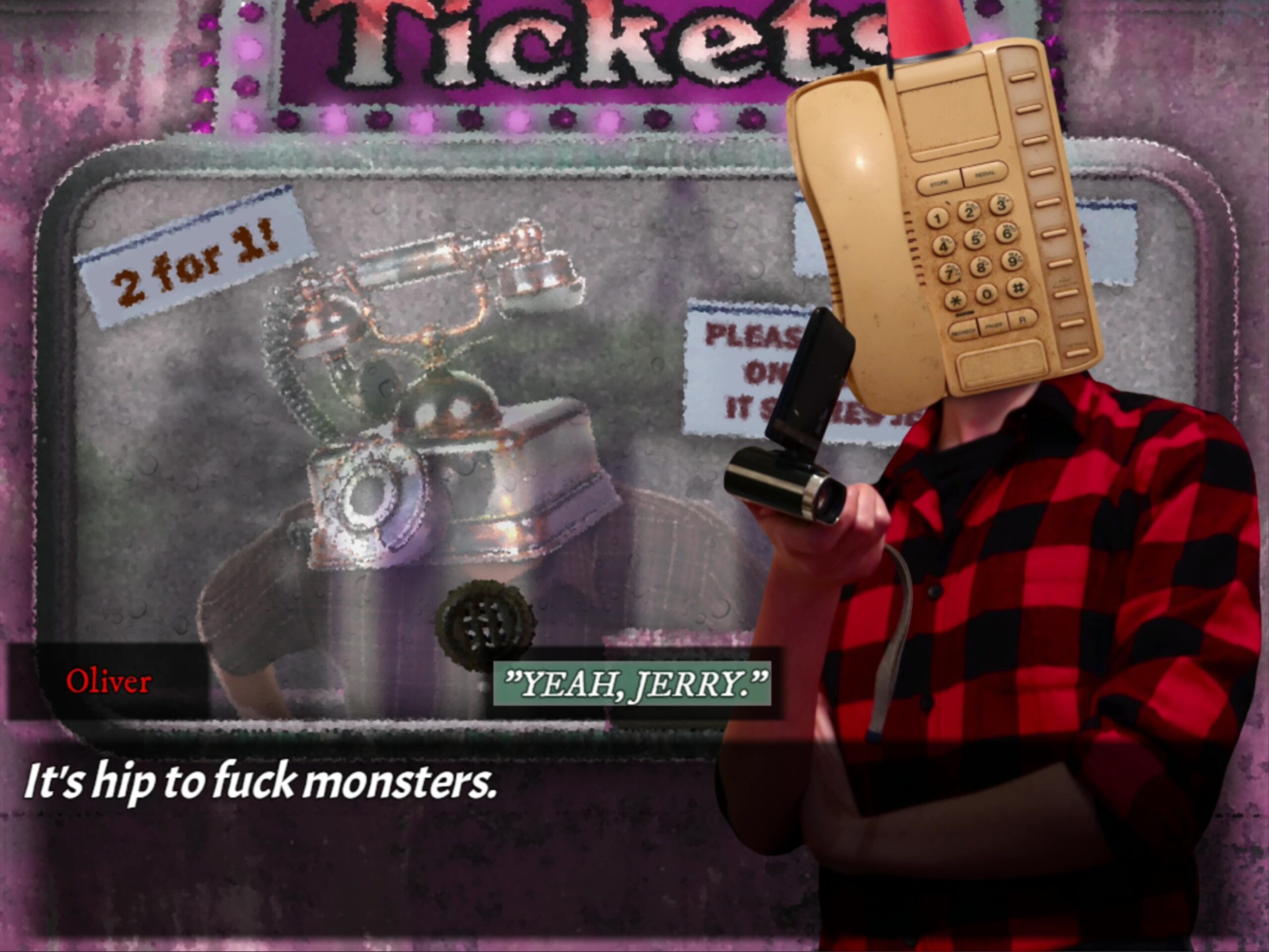 That isn’t an insult, it’s just going to take a special sense of humor to really get into it. It’s always on; there is no respite from the insanity. And there’s a lot of it. You need to successfully clear the four romantic options to unlock the third chapter, and each romance also carries the possibility of getting maimed. Then there are passersby you can talk to who have no bearing on the plot whatsoever, but they go on-and-on-and-on about various topics that skirt the edges of making sense.

Admittedly – and shamefully – it is my type of humor. At the same time, I found Dialtown to be too wordy. At some point, you want the jokes to just stop for a moment so we can please move on. The worst is when a chain of jokes is built on a shaky foundation to begin with, so you’re sitting through a series of misses and it just keeps going, not realizing that no one in the room is laughing.

Of course, this is going to be completely subjective. It’s just that in my experience, I love the “we are all wretched” humor, but wish it would be more punchy and less rambly. 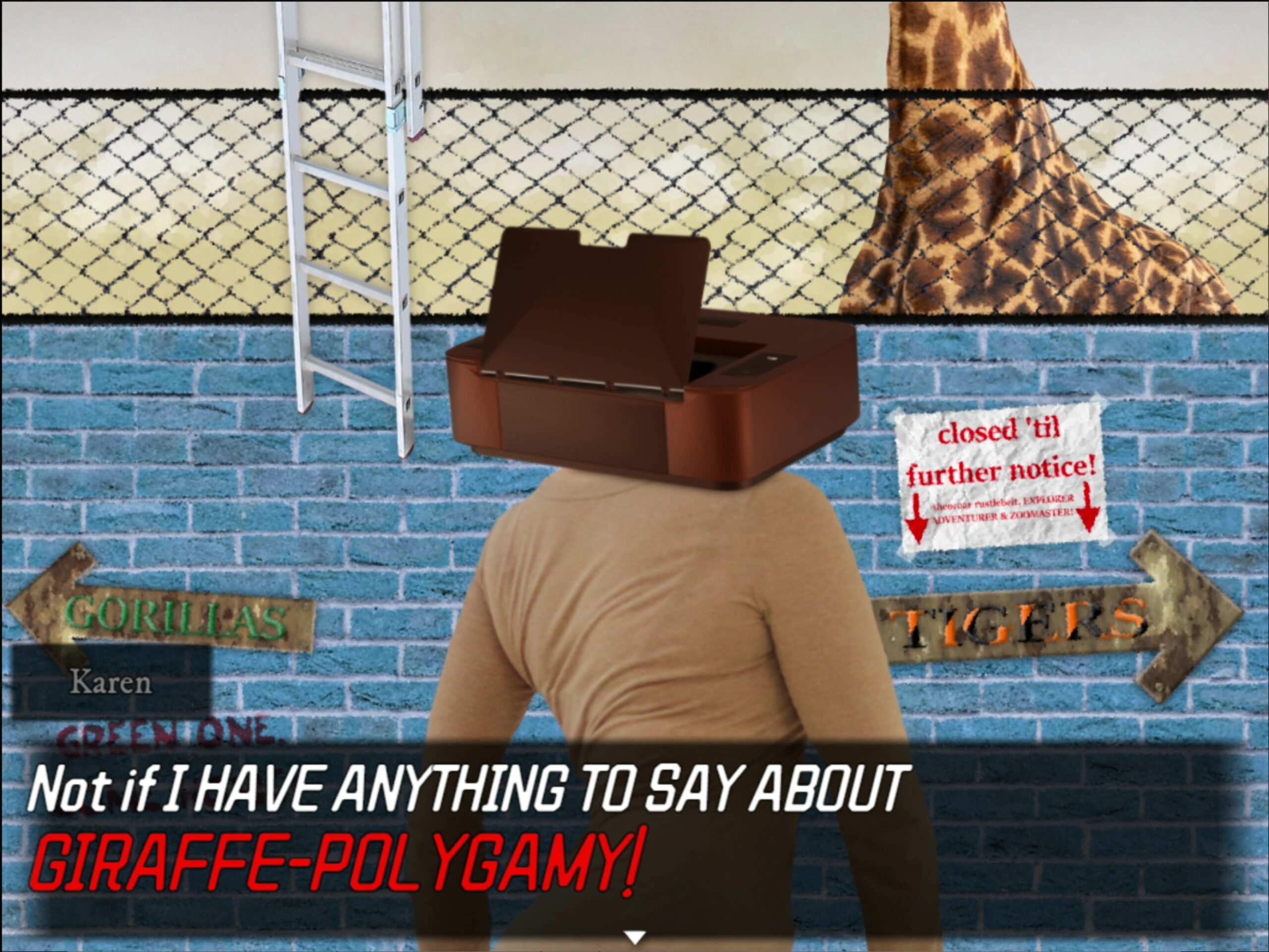 That’s not to say there’s no depth to the writing. There’s a clear narrative and background lore in play here. Everyone has antique electronics for heads and, as it turns out, there’s a reason for it that ties into the greater plot.

Each of the romantic subplots isn’t just, “how are you going to get into their pants,” but rather, how you’re going to make it up to them for putting up with your grotesque egg-laying. It’s a lot about addressing insecurities, and while they’re bizarre on the surface, if you manage to get past that first impenetrable layer, there are actual relatable issues underneath.

The major problem with the plot is that it meanders a lot. Much of the detritus that your dig through does get called back to in the final chapter of the game, but it can take some effort to stay engaged when Dialtown keeps taking strange and seemingly pointless detours. It’s likely that Dialtown’s tendency to ramble is going to be the make or break for some people. As legitimately funny as the writing is, it’s hardly the cleanest or most efficient. Some topics get covered way too frequently, and it has a somewhat annoying habit of dwelling too long on certain jokes. It took me over a dozen hours to hit the end of Dialtown and I had no intentions to go the completionist route and get all the possible endings (of which there are a dizzying number).

Its aesthetic is well executed. Its flavor of humor seeps into all facets of the UI and even the music. The tunes that get played at you are a mix of visual novel style elevator music and elevator music that is underscored by loud purring and every note is played as a “meow.” It’s almost cute until everything gets drowned out by a pained, feral grunt.

Yet, there isn’t much out there like it. It’s not so much a deconstruction of the dating sim, but rather a warped version of it. Dialtown applies its unhinged writing to the genre, and it works exceedingly well. There were many times when I’d elbow my husband to look at whatever the heck was on my screen at that moment. I tried to explain the concept of the game to him and he responded with “please stop.” That’s a win in my books.

Here’s How to create and leave a guild

Horizon Forbidden West Is Getting Review Bombed on PS5, PS4 for No Reason