New Battlefield 2042 maps will be smaller in scale – Destructoid

Many of us have left Battlefield 2042 behind, and I’m not sure when, if ever, we’re coming back. In an article posted today, DICE highlighted some of the “current problems” with map design and gameplay. And in terms of new maps down the road, Battlefield 2042 players should “expect future maps to be smaller in scale than most of our release maps.”

That’s potentially reassuring to hear depending on how well you’ve liked the chaotic-at-best, dull-at-worse matches so far. With 128 players roaming around open-ended map layouts, some of the biggest complaints from Battlefield 2042 players have focused on a lack of cover leading to a poor “line of sight,” long on-foot travel times feeling like a “walking simulator,” and being overwhelmed as infantry with so many vehicles in the mix.

In the blog post, DICE touches on all of those player-feedback points, and a few more.

The idea is to get these thoughts out in the open, propose changes, and have an “open discussion” with the Battlefield community, according to the team. We’ve heard it before!

For high-priority maps like Kaleidoscope, where there’s far from a silver-bullet solution, that means a rethink in multiple areas, which will take “substantial development time” to fully implement. As such, not every proposed change will make it into every map “simultaneously”; instead, the developers will focus on “the maps most needing the changes first.” Check out these proposed capture point changes for Conquest: 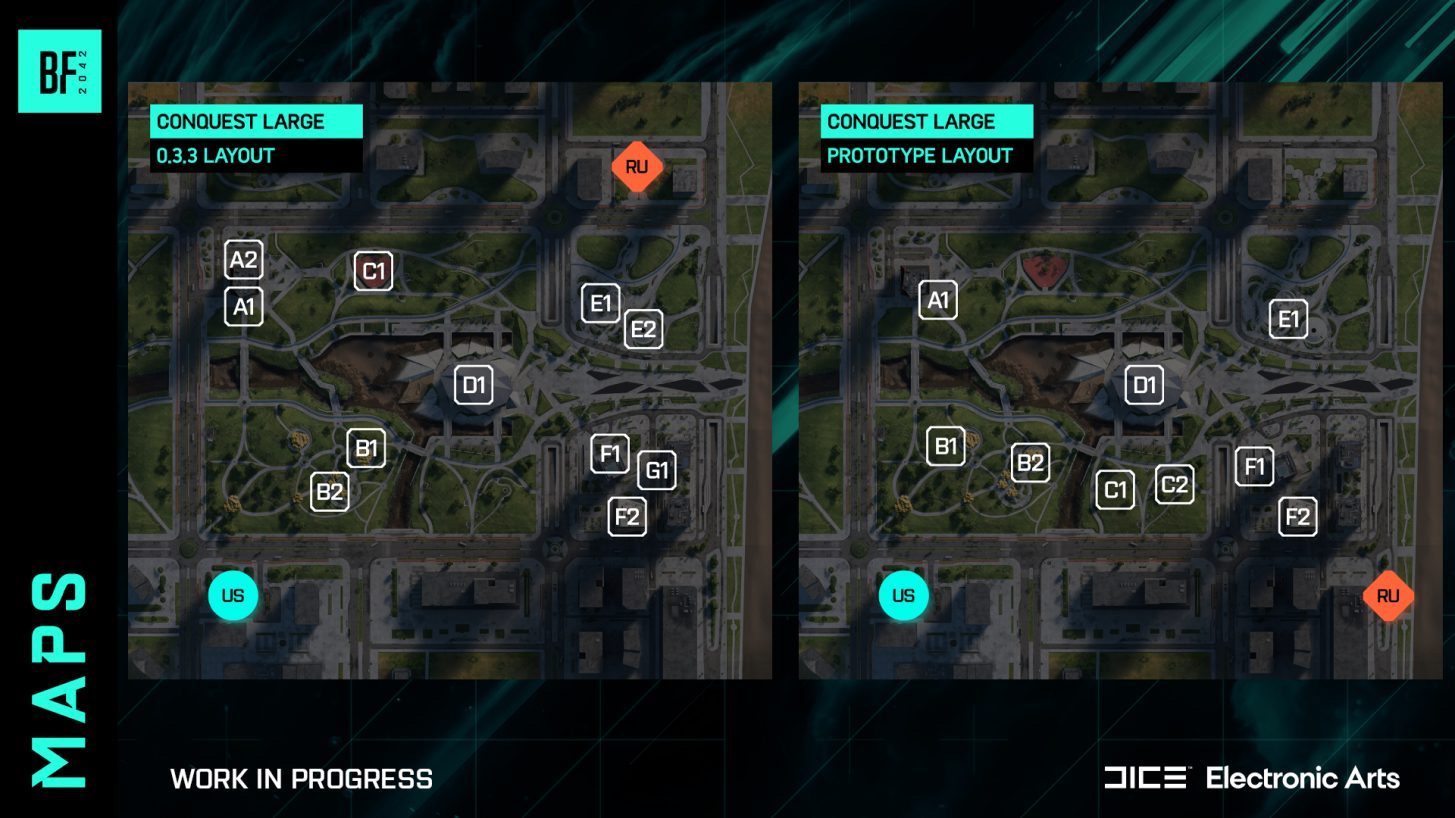 Here’s the takeaway that spoke to me as someone who enjoyed 2042 at times but also got tired of its flow pretty quick: “our intent is to reduce the likelihood of being fired at from a 360-degree angle, and to take away that Hail Mary feeling of running onto no man’s land between objectives.” I feel like this sensation was far too prevalent in my time.

More than anything, there’s this “Mmm, you don’t say!” takeaway:

“The biggest action point for ourselves is that bigger maps doesn’t necessarily mean more freedom and playstyles, or fun. So you can expect future maps to be smaller in scale than most of our release maps. This also means we are reviewing a possible reduction in the number of Sectors and total Capture Points per map when playing at 128 players. We’re also thinking about changing the shape of the maps to give them more sense of direction. We feel that going from a common Battlefield standard of a square shaped playspace, to a rectangular shape most commonly used in some of our older entries in the franchise can better incentivize pushing forward versus circling out sideways. We feel that this can help to focus areas of combat, enable you to have more focused awareness, and reduce opportunities for enemy fire to come in from all around you.

We’ll also review the player counts across modes such as Breakthrough, as well as the types and number of vehicles that can be used on specific maps. For example, does it make sense to have (multiple) Jets on Kaleidoscope if that is our smallest map? It’s important to note here that our focus isn’t to limit your available options, but instead to find the right balance which positively enhances your gameplay experience.”

Season One of Battlefield 2042 will start in “early summer,” which is later than expected. Clearly, there’s still much to be done even before new content starts rolling out.

It feels like the Battlefield crew is in another mess, and I hope it can find its way out. (Or at least salvage as much as possible until it’s suddenly already time for the next installment.) This series could and should be so much more than what we got with 2042. I really believe Battlefield still has its place in the current multiplayer landscape — just… not like this.