Kirby and the Forgotten Land – Destructoid

I remember the first time I stumbled across the existence of Kirby. It was in a Nintendo Power magazine, promoting the NES game, and I knew I just had to play it. The whimsical designs were so different compared to a lot of other platformers at the time, and once Kirby Super Star rolled around, I became a fan for life. For the most part, Kirby has been good to me throughout its 30-year existence. Kirby and the Forgotten Land keeps that streak going. 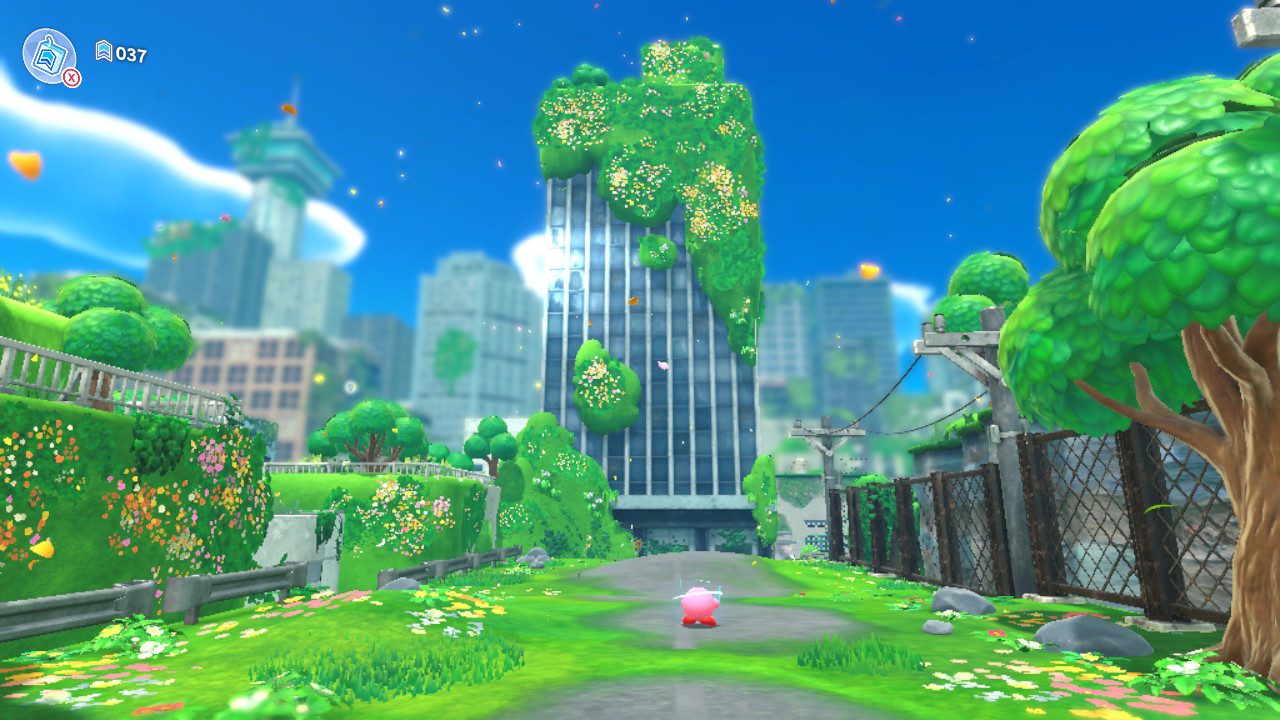 Kirby and the Forgotten Land keeps the same “pick up and play” simplicity of past games in the series, but it also had the added ability to keep surprising me.

Forgotten Land‘s secret ingredient is that it’s as relaxed or as involved as you want. Levels have hidden tasks to do so you can rescue all of the Waddle Dees (the main “collectible”) in any given zone, but you don’t need to do them. Worlds provide ample challenge rooms that task you with mastering individual forms (both of the copy ability and Mouthful variety), but they’re optional. Going hard on the former will open up more of the hub village — which includes shops, minigames, and such — and the latter will provide more copy ability evolutions, which level-up and alter Kirby’s powers.

It’s a loop I can really sink my teeth into, and adapt to. If there’s a particular level I really dug, I was happy to go back and comb over every nook and cranny. If there was a location I didn’t feel the need to do again immediately, I’d move on, and feel like I missed nothing. The pacing is absolutely mesmerizing, and when you add in the ability to do drop-in/drop-out co-op at any time, Kirby’s your uncle.

While scurrying around the map, you’ll take on core levels and optional challenges, culminating in a boss fight that unlocks the next world. The formula is straightforward, but there’s a lot of layers involved at each step. That said, I’ve always appreciated the simplicity of a level-based map. Super Mario Galaxy 2 did this wonderfully and Kirby traditionally does too, so I’m glad they kept it.

The secret Waddle Dees are where things start to get more complicated. During the course of a level, you’ll typically see “???” prompts showing you that some of them are available to find, and only when you actually uncover them or finish a level will those question-mark prompts reveal themselves, or provide a hint, respectively. It’s a chill vibe that encourages you to seek out the road less traveled, but doesn’t force you to tediously run down every path if you don’t want to.

Some of them are skill-based (like “don’t drive off the edge during this portion of the level where you’re controlling a car”), some of them are seek-and-finds (“eat three snacks off tree stumps”), and others are straight-up “find this hidden area.” Many of them are so well hidden you’ll miss them the first run-through, and I love the idea of people potentially using a guide for a Kirby game.

Hidden Waddle Dee challenges even apply to boss battles, including a time trial “finish the boss before this time” requirement, or “kill the boss with [x] copy ability.” It drives the replay value up and complements the hassle-free gameplay. These quests/missions for each stage add some depth to the otherwise straightforward foundation of the Kirby formula.

Those challenge rooms I was talking about earlier are actually called “Treasure Road Challenges,” and they’re timed courses centered around one power: they remind me of the Mario Sunshine FLUDD-less levels, but less intense. Because they’re timed you can try and get the best possible score, and although there isn’t much pressure to actually clear them, the “recommended” par times for bragging rights can get pretty tight. 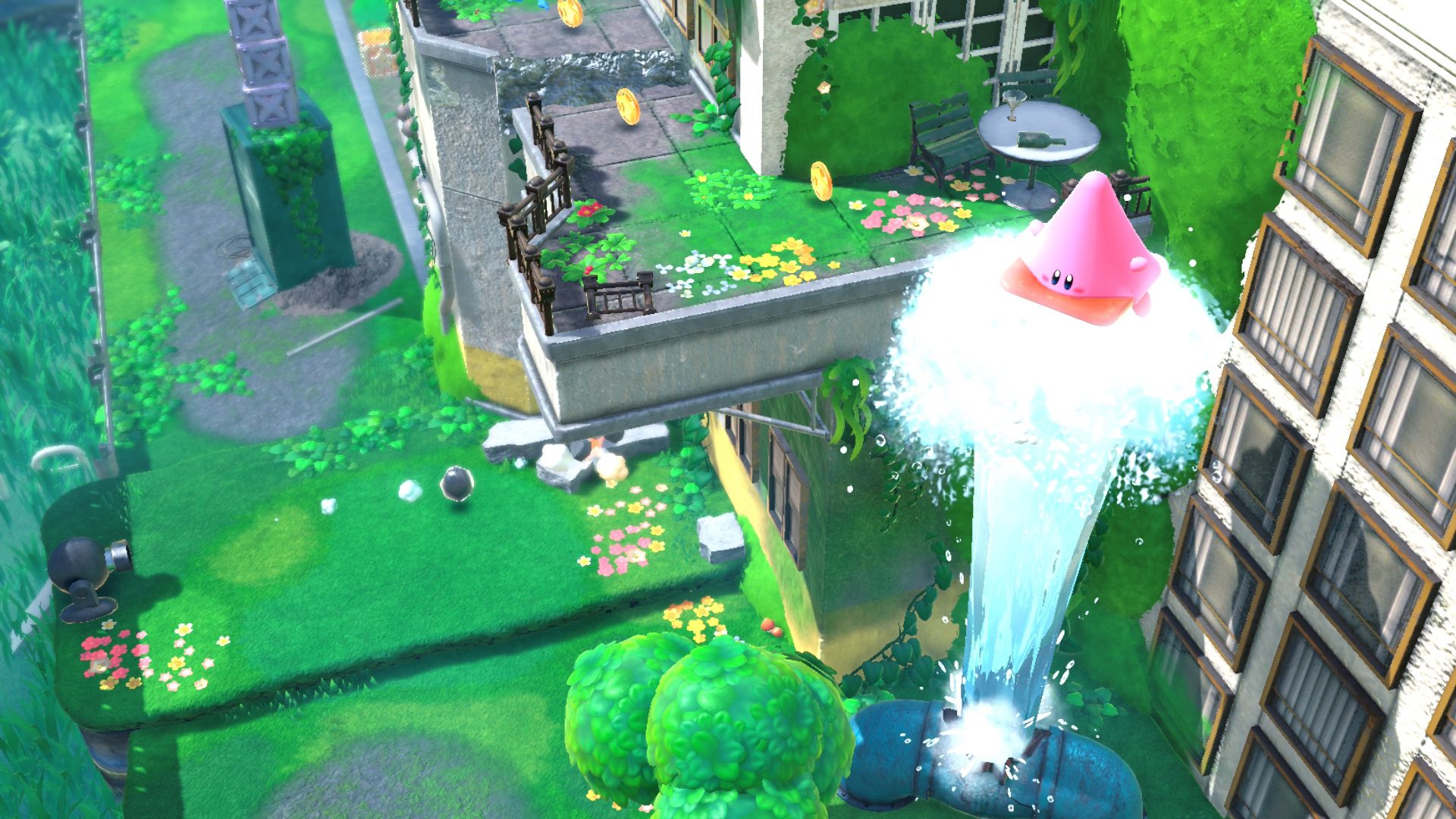 The Waddle Dee Town hub is a lot more fun than I expected, and I found myself going back every few levels or so just to check it out. You can dine at the local cafe (and do a Diner Dash-esque minigame with three difficulty levels and co-op support), go watch movies in a town theater, buy items to take with you at a store, challenge the colosseum, fish, collect gacha (the other main collectible), upgrade your copy abilities, and a few other surprises.

It feels like everything funnels into one clear path of progression, since levels innately reward Waddle Dees and provide you with a little extra oomph for unlocks without even trying to laboriously finish every secret challenge. Upgrading (evolving) abilities is another huge hook in Kirby and the Forgotten Land. Initially, I skipped over a lot of challenges, but around the second world or so after I had started acquiring “blueprints” to unlock more copy alterations I got addicted and cleared all of the Treasure Road levels out.

Copy ability evolutions are incredibly fun to experiment with, and you can even set a “default” option for them when swallowing up enemies. In other words, you don’t need to worry about needing to find “Blade Knight B” enemies to use the second evolution of the Blade Knight: you can just swap to it in the hub town, go into a level with it, and get it back every time you swallow any form of the Blade Knight. By the game’s end, I had a wide array of evolution defaults that I mixed and matched.

The base copy abilities feel great mechanically, and so does the new “Mouthful Mode,” which basically amounts to Kirby choking on a car or vending machine — without being able to swallow it — to use it as a temporary means of travel or attack. The car is self-explanatory, as Kirby can drive around in the specific portions of the game that Kirby and the Forgotten Land lets you use Mouthful Mode, but other objects let him spew projectiles that can open up walls, glide, or fit in tight spaces. 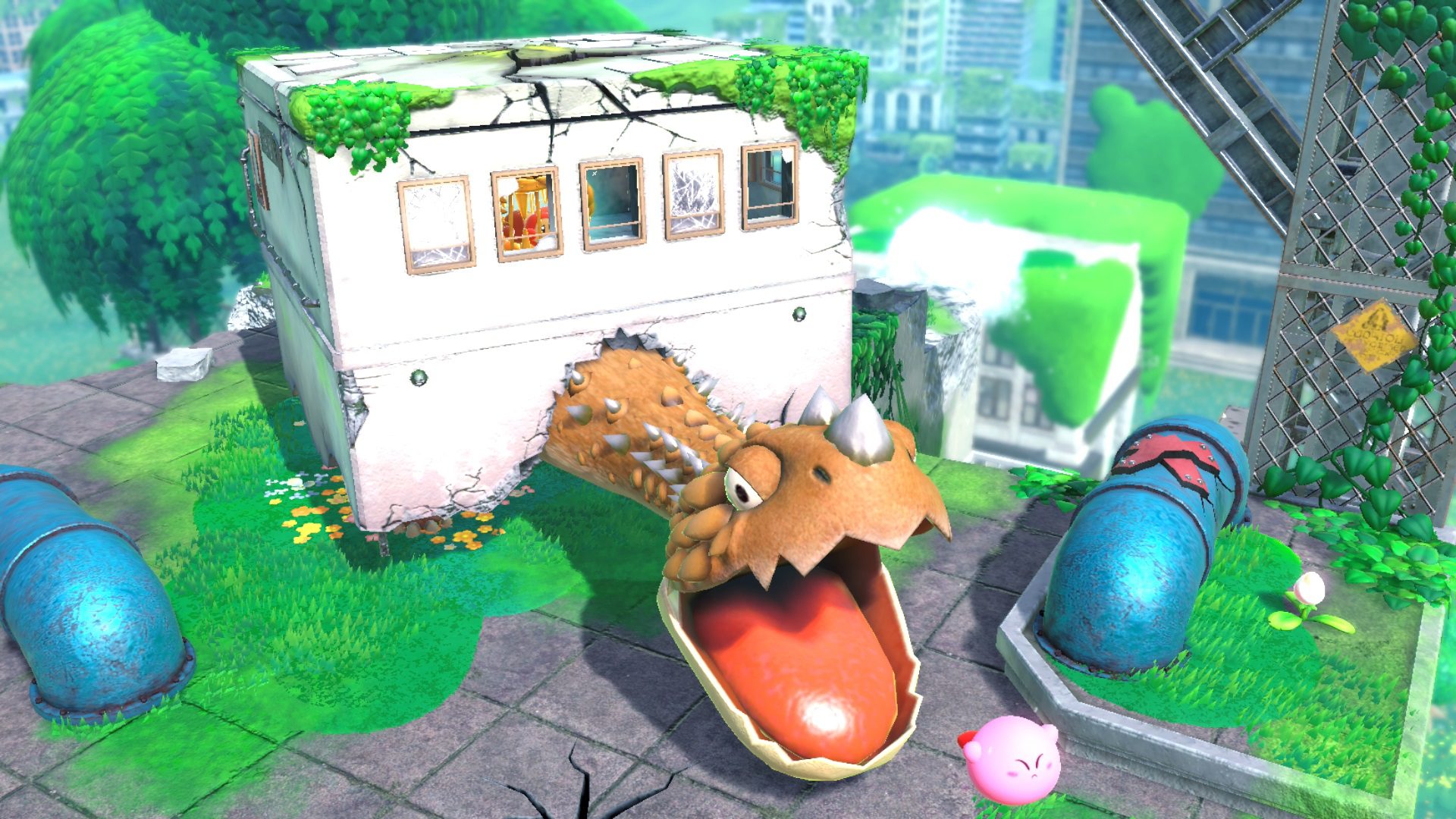 I found that at its absolute worst, it never got in the way; especially since you can use Mouthful mode and keep your original copy ability (a good quality of life choice that makes it a lot less annoying). In all, it reminded me of when Yoshi would occasionally morph into a vehicle in Yoshi’s Island or I’d pilot animal friends in Donkey Kong Country. Often, especially in the mid-to-late game, it would lead to a few interesting level designs.

Again, the entire game can be played in co-op after the short tutorial, and I played roughly 50% of the game with a Waddle Dee by my side (which has a limited moveset and can’t use copy abilities). It’s convenient, optional, and if the second player dies, their life bar slowly refills and they respawn: easy. It’s a perfect way to involve a family member whenever they feel like joining you, but I can’t help but wish that co-op had a meatier presence. It would have been even better if there was a character select option that highlighted different playstyles, as the person controlling Kirby is constantly swapping around and doing drastically new things multiple times per level.

If you try and do everything — as in, finish all the evolutions, get every gacha toy, and save every Waddle Dee — it could take up a good chunk of time. Again, it’s old school in that there’s a lot of stuff to do in the base game, but it has a new school approach of not gating a lot of it off. Sometimes HAL and Nintendo really show up a lot of the competition with a retro mindset.

I’m an easy sell when it comes to Kirby, but Forgotten Land is easily one of my favorite entries in the series, and possibly my top game outside of Kirby Super Star (an all-time classic). I came in expecting a very serviceable Kirby adventure and got a lot more, but with those same straightforward and effortless virtues that past games have commanded.