One of my favorite developers of the past 20 years has been a little production house known as 1-Up Studio. You probably best know it from its work as a support studio, assisting in the development of games like Captain Toad: Treasure Tracker, Ring Fit Adventure, and Animal Crossing: New Horizons. But that’s not why it’s one of my favorites. I like it for the games it helped developed before it became known as 1-UP Studio. Originally, the developer was called Brownie Brown, and it helped create some of the most interesting games of the 2000s and early 2010s. Games like Fantasy Life, Magical Starsign, and Professor Layton’s London Life. Oh, it also helped develop Mother 3.

In February 2013, the developer decided to rebrand as 1-Up Studio. Shinichi Kameoka, one of the founders of Brownie Brown, departed to set up his own shop called Brownies Inc. The studio got its start with two mobile games: Seventh Rebirth and EGGLIA: Legend of the Redcap. In 2019, it joined forces with Marvelous to create Doraemon: Story of Seasons, arguably the best Story of Seasons game available on Switch. While Brownies could have easily gone back to the mobile market following that release, it remained committed to consoles, even if that meant porting its previous mobile titles over to console.

Some games excel when they jump from smartphone to console. Dandy Dungeon, Part-Time UFO, and Retro Bowl are three great examples I can list right off the top of my head that made the leap with style and grace. EGGLIA Rebirth, an updated version of the mobile title with all in-app purchases removed, attempts the same jump. Unfortunately, unlike those titles listed above, it doesn’t quite stick the landing.

[Editor’s Note: As has been pointed out since publication, EGGLIA on iOS and Android originally launched as a premium-priced game before transitioning to a free-to-start game. The writer of this article apologizes for any confusion this might have caused. The rest of this impressions piece remains as it was originally published.]

EGGLIA Rebirth tells the story of a red-capped goblin boy destined to destroy the world. Or at least, he was until his horns were removed, rendering him docile. With his horns gone, the kid can carve a new path for himself, one where he is the hero rather than the enemy. After a chance encounter with a young girl, he sets out on a quest to revive the land of Egglia and make friends along the way.

The world was torn asunder years before the events of Rebirth, with its many different lands sealed in glowing eggs that only the redcap can open. On the overworld map, you’ll pick an area next to the hub town to release each part of this trapped world, expanding and restoring the kingdom to how it once was. Each new piece of Egglia the redcap unlocks gets you access to a handful of levels teeming with monsters to kill, supplies to gather, and new friends to meet. And story. A whole lot of story.

The gameplay of EGGLIA Rebirth is grid-based with hexagons dotting each level’s map. Movement is determined by the roll of the die. With each turn, you can move and perform an action, such as attacking an enemy or opening a chest. Once you complete that action, your turn is done, so don’t think you can stab a monster that’s in the space right next to you and then run away. The die also decides the power of your attack, so striking a monster after rolling a six will do more damage than if you roll a two. Sometimes, the number on the die can mean the difference between a one-strike kill and having to attack a second time. 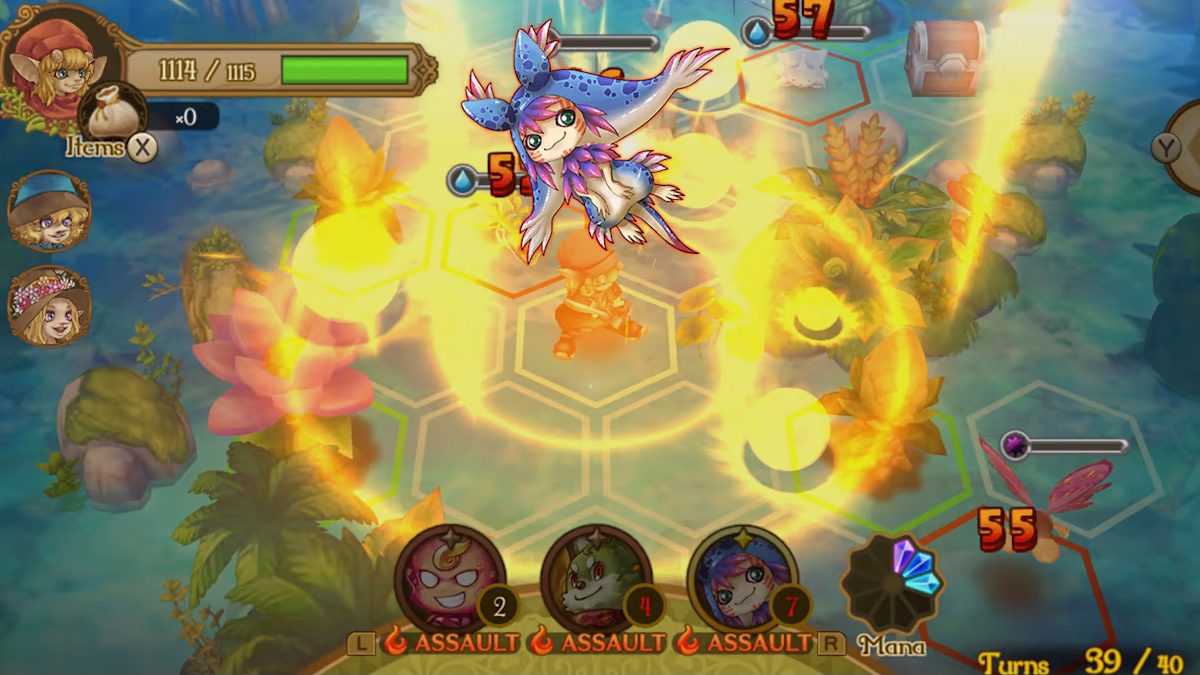 The redcap’s basic attack is a melee swing, but you can also equip up to three spirits that grant offensive and defensive magic spells. Initially, these are pretty weak in their execution and range. As you build up and evolve your spirits, they become more useful in the battle. Of course, doing all that leveling will take a lot of time, which is just one of the ways EGGLIA’s origins as a free-to-play game hampers the experience on Switch.

When I take a step back from Rebirth, it’s clear to see just how much of the game is a checklist of free-to-play concepts that are rife in the mobile marketplace.

There is a town you need to settle and build, tons of objects to collect, seeds to grow, gacha pulls, timers, recipes to cook, characters to level, and relationships to build. And that is to say nothing of the grind. Going on missions and quests has the same format as you find in games like World Flipper or Dragalia Lost, where there is a little bit of gameplay sandwiched between a lot of story exposition that is lather, rinse, repeated with each new map you unlock. 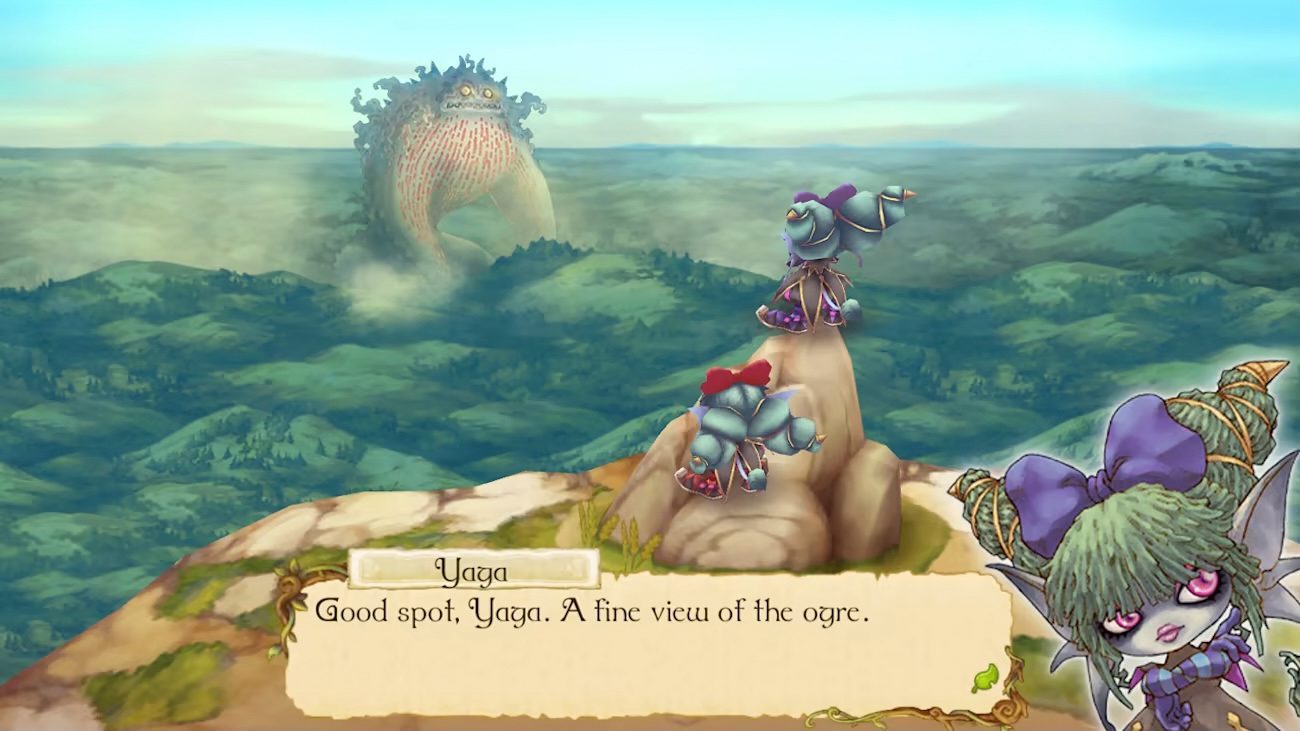 While the narrative doesn’t do anything for me, the world of Egglia does. If you look at the screenshots and think “Boy, this looks like a Mana game,” there’s a reason for that.

Despite not particularly caring for the die-centric gameplay or the adolescent dialogue, Egglia is an inviting world I loved being in. In an interview with 4Gamer in 2018, Kameoka said his studio was going to start “making ‘game-like’ titles like we used to before.” I’m not sure if EGGLIA Rebirth is part of that plan, but if there is more on the horizon for consoles from Brownies, I can’t wait to see what’s next. Because I need more games in my life that look like this. I just need them to play a hell of a lot better than EGGLIA Rebirth does.

If you’re at all curious, EGGLIA Rebirth is now available for Nintendo Switch for $19.99.

[This impressions piece is based on a retail build of the game provided by the publisher.]

Elden Ring servers will undergo maintenance for a little while today