Capcom has found itself in the bad books of the competitive fighting game community (FGC) after proposing an official “licensing” scheme that could potentially be applied to all Street Fighter V (and presumably Street Fighter 6) tournaments held anywhere on American soil, regardless of size.

Round 1 kicked off on February 28, when Capcom outlined its plans for the “Street Fighter V Community License Agreement“. In a nutshell, the proposed plan would require all Tournament Organizers (TOs) to apply for an official license in order to run a local or national tournament on flagship fighter Street Fighter V: Champion Edition.

All TOs running SFV would be required to officially run the event under Capcom guidelines, with Capcom suggesting that securing an official registration will add several stages of legitimacy to the tournament, while also offering a sense of insurance in regards to prize payouts and general player behavior at the event itself. Capcom would also supply TOs with marketing assets with which to promote their event, with the TO having the prestige of hosting an “official” Capcom Street Fighter tournament.

As promised, I wrote an article explaining Capcom’s new licensing structure, what its community event license entails, what its esports event license could mean, why it may be doing this, and what I think about it. Let me know if you have any questions!https://t.co/RVf28XbdR3

And in the blue corner

The FGC, however, does not see Capcom’s plans as being altogether wholesome. Already concerned with the opening “big brother” nature of having the multi-million dollar company Capcom over one’s shoulder, the proposal also notes that all live streams, video, and photographs of any licensed events automatically become usable, unpaid, by Capcom. Additionally, Capcom will have the right to limit prize pool amounts, will ban priced ticketing for spectators, ban the sale of official merchandise on-site, and could simply deny the event altogether if it does not fall within company guidelines.

Essentially, the FGC sees the proposal being less about player security and safety, and instead believes Capcom is simply trying to seize control of the American competitive Street Fighter scene on all levels, from the smallest local gathering to larger, national tournaments. In response to the proposal, some TOs have already announced that they will simply no longer hold SFV tournaments at their events, focusing on other fighting games instead. A later statement from Capcom has done little assuage concerns. 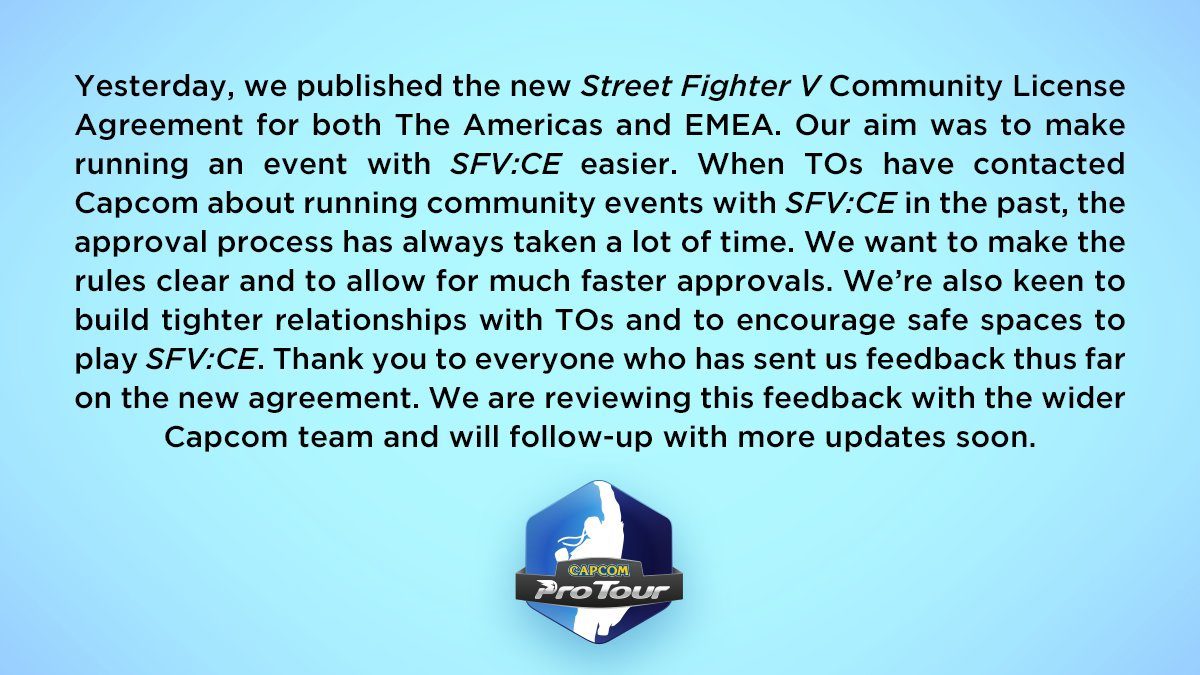 This rings a bell…

It should be noted that this all sounds incredibly familiar. Around the 2017 launch of Marvel vs. Capcom: Infinite — a title which Capcom was convinced was going to be the biggest competitive fighter of all time — leaked plans for MvC:I events featured a similar version of this licensing concept, alongside numerous other big-money plans for the competitive scene. This would not come to pass, of course, as MvC:I  failed to hit as a major league fighter. It seems, however, that Capcom’s plans might now be dusted off for both the twilight year of Street Fighter V and — likely — the incoming Street Fighter 6.

The FGC competitive scene is far from perfect. I have personally experienced problems in regards to payouts, insults, and general poor tournament management. But I wholly understand the TOs concerns here. Aside from the ownership of assets and the dictatorial nature of rules and pricing, Fighting games have always been built on their communal “grassroots” mentality. Capcom’s proposals arguably risk implementing control and a sense of corporate capitalism at even the smallest, most private of events.

The FGC has always been proud of its “homegrown” “street” mentality, and while the scene certainly needs to see better moderation and player security, having the biggest fighting game publisher in the world breathing down your neck — while simultaneously handing over all of your scene’s assets to them, free-of-charge, might not be the way to inspire confidence and trust between either party.

When the Capcops catch you and your friends playing SFV with an expired permit. pic.twitter.com/5P4Eus6DwX

Fight for the Future

The fighting game genre is going through yet another renaissance, with Guilty Gear, The King of Fighters, Tekken, Super Smash Bros. DNF Duel, Mortal Kombat, Breakers Revenge, BlazBlue, and a slew of awesome indie fighters either on the near horizon or already embedded within the competitive scene. National tournaments have more than enough titles to choose from and competitions to run. Street Fighter is not the “be-all and end-all” of the FGC. (And I’m old enough to have watched it all go down.)

I love Street Fighter, passionately and wholeheartedly. I also want to make it clear that I understand that when a TO runs a game, it is a representative of a brand, and as such publishers will wish to have a hand in how said brand is represented. All TOs need to accept responsibility for the safety and security of their players, spectators, and cash-handling affairs. It is a big deal, and should be treated as such.

Still, if Capcom doesn’t tread carefully with these proposals, communicating and listening to TOs while working out what is the best, fairest, and most rewarding deal for all parties, then Street Fighter 6 could potentially observe as rough a launch as Street Fighter V — worse still, Capcom could find itself with another Marvel vs. Capcom: Infinite on its hands.