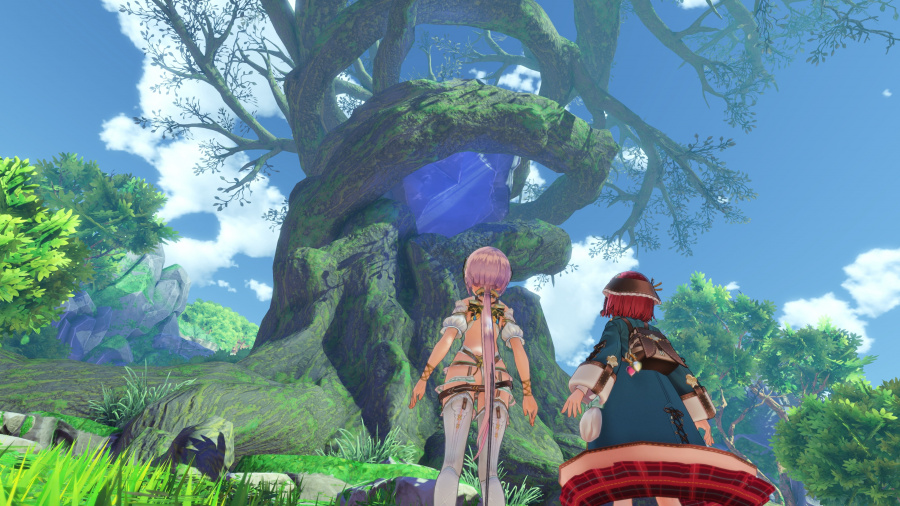 The Atelier games are a somewhat niche Japanese RPG series so it might surprise some to know that it’s actually been around for 25 years, with 23 games in the main series and a heck of a lot of enhanced ports and side games. To celebrate this impressive achievement, developer Gust has decided to go back and continue the story of one of its previous alchemists, the ever cheerful and charming Sophie.

Atelier Sophie 2 starts off shortly after the first game with Sophie determined to take the alchemy exam and also find a way to restore Plachta to her original body. But things are never as straight forward as they should be, and it’s not long before the two find themselves sucked through a portal into a dream world.

It seems that this world was created by the goddess Elvira, who has the ability to see into people’s dreams and if she likes what she sees, then she invites them into her world. But something strange has happened as Sophie wasn’t invited and she arrives to find that, despite falling through the portal at the same time, Plachta is nowhere to be seen. Thankfully the residents of the dream world are a friendly bunch, so it’s not long before Sophie finds herself some new companions to help track Plachta down. 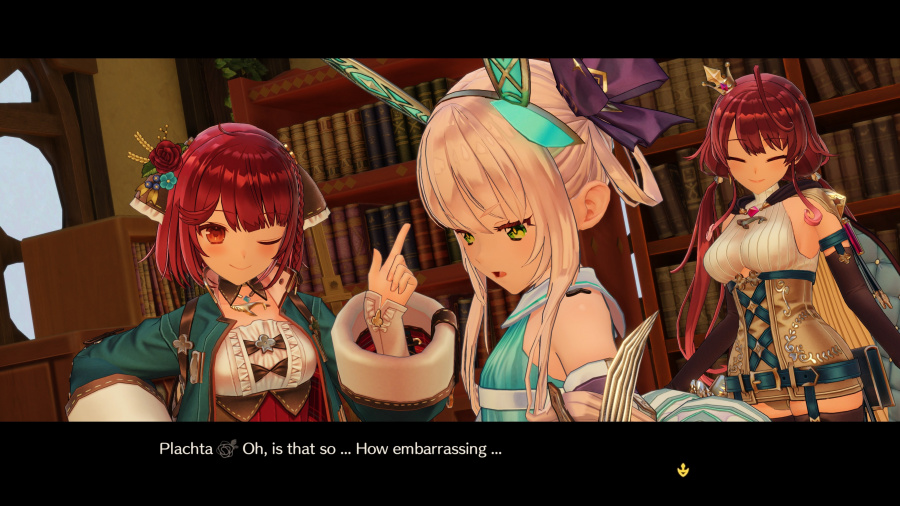 While some of the story revelations are a little bit obvious, it’s told with so much charm that it’s hard not to just enjoy the ride. Especially as all of your new friends are incredibly endearing and there’s a real joy in getting to know each of them, as well as helping them out with their own personal conflicts.

The storyline is very separate to the original, so you don’t necessarily need to have played the first game or any of the others in the Mysterious trilogy to appreciate it. There are some references to past events and characters, but with a handy recap movie available from the main menu it’s easy to catch up. There’s also a very useful Guide which adds an encyclopaedic-style entry whenever a character or event is talked about.

There’s lots to explore in the dream world, and in typical Atelier fashion, you’ll be spending much of your time out gathering materials, fighting monsters, and of course performing alchemy.

Things have definitely improved since the first game, with the areas that you get to explore being much more detailed and vibrant. They also borrow some gameplay mechanics from Atelier Ryza, including the need to craft specific tools to gather materials from some spots, such as a fishing rod to gather from water or a slingshot to gather from trees. 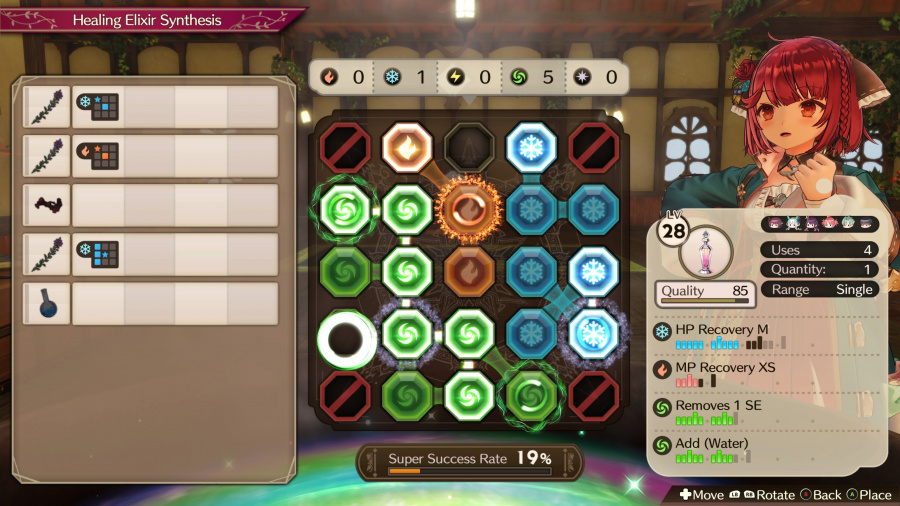 There are also special gathering spots which glow and give you the option to play a minigame. Every tool has a slightly different minigame to play, but will basically allow you to try to add specific elements to your gathered materials. Being able to tweak materials can be incredibly useful when it comes to crafting new items.

The alchemic system is similar to the original, where every material has a different shape and a different elemental type and you’ll need to place these on to a grid. Depending on how full the grid is and what elements are used the final item can have vastly different effects and quality levels. There are also added complexities where you can use catalysts to change the grid size, or link materials together to increase the given effects.

Performing alchemy is basically a puzzle where even the order that you place materials can lead to huge differences in the end result. As you get access to better raw materials and your understanding of the system grows, you’ll be able to create really powerful armour and weapons, as well as items that can be used in battle. It’s a really flexible system and it’s pretty addictive to try and achieve the absolute best stats on everything you make. That being said, if you’re not a fan of micromanaging every step of the alchemy process, then there is the ability to just go ahead and auto-add materials. The end results are never quite as good as doing it yourself, but it’s a pretty handy option if you just need to make a bunch of materials to fulfil quests. 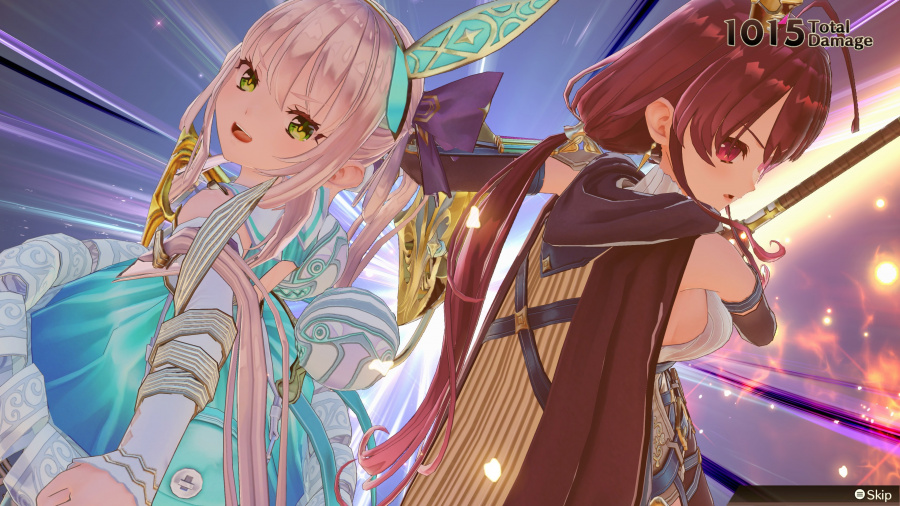 Alchemy can also be used to create special stones which allow you to change the weather when out exploring. This impacts not just the look of the area but also what materials you can pick up and what enemies you’ll encounter. It can also drastically change the layout of the environment, so, for example, if you activate the sunny effect, you might be able to dry up a river enabling you to cross over to the other side. It’s a real delight to explore the world and see what new things you can find as you gain access to new weather effects.

As you’re running around exploring you will of course come across plenty of monsters. Combat has gone back to the more traditional turn based system instead of the faster more active one used in Atelier Ryza. It’s a fairly simple system but there are a few interesting mechanics like having a front and rear row of characters that you can switch between. You’ll be able to accrue TP points which will allow characters in the rear to protect those in the front as well as pairing them up to perform powerful Twin Attacks. Even though there isn’t anything particularly innovative about the combat, most fights are fairly quick to finish and it’s always lots of fun to use your alchemic items to blow up baddies. 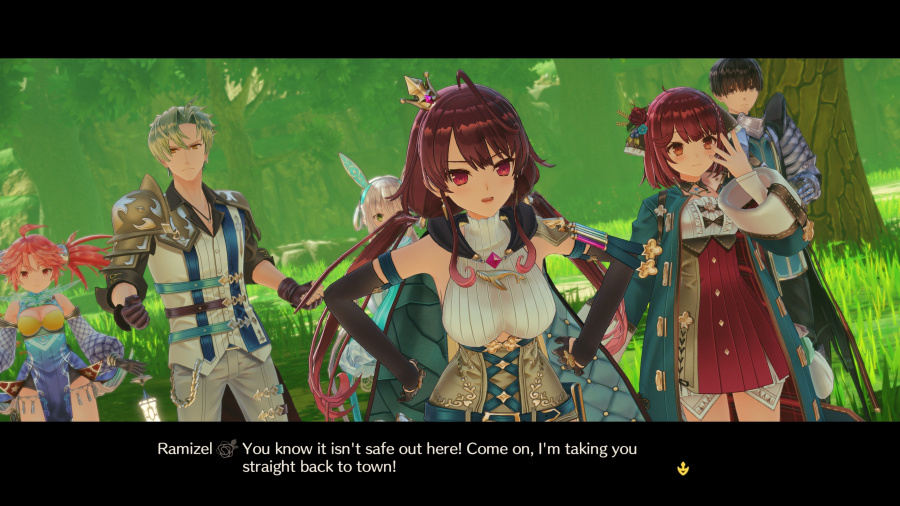 When you’re not investigating the disappearance of your friend or exploring the dream world, there are plenty of other activities to keep you busy. From researching new alchemy recipes, learning new skills, raising friendship levels, and taking on requests from the locals, it always feels like there’s something new and interesting to do. Some of the side activities do feel like busywork where you’ll be sent off to “kill X number of monsters” or “make Y item”, but most tasks can be completed as you play through the story and you can easily ignore anything that doesn’t interest you.

Atelier Sophie 2 is visually worlds ahead of the original but at the same time it does look a little dated in places. There are definitely some aspects such as blocky tree foliage or flat building textures that aren’t particularly impressive, but thankfully the character models are all very appealing. With their fantastical outfits and adorably expressive faces, this is easily the best that any Atelier game has looked to date.

Atelier Sophie 2 massively improves upon everything from the original game. It has a much more interesting story, plenty of heart-felt character interactions, and a ton of different side activities to keep you busy. Becoming a master alchemist and exploring this vibrant dream world is a fantastic way to celebrate 25 years of Atelier titles.