The tactics genre has seen a resurgence as of late. Big entries like Fire Emblem: Three Houses, coupled with impending releases like the Front Mission remakes and Firaxis’ Midnight Suns, have grid-based strategy on the rise. And Triangle Strategy is at the vanguard.

Triangle Strategy is the latest tactics RPG from Square Enix, developed with Artdink and the infamous Tomoya Asano. The latter made a big impact on the RPG scene with, among other games, 2018’s Octopath Traveler. Its HD-2D style has become more prevalent in the years since, and some have wondered whether Triangle Strategy might make a similar impact on the tactics scene.

We’re still working through the game here, but ahead of launch, we got a chance to talk with the producers of Triangle Strategy: both Asano and Yasuaki Arai. We discussed storytelling, battles, motivations, and the tactics RPG genre as a whole. Here are a few of our big takeaways.

This interview has been edited for clarity.

One of my first questions for the pair was why they turned to the tactics RPG genre. The standard party-based RPG is no stranger for any of these developers or publishers, but it’s been a while since a major tactical RPG came out of Square Enix.

Asano outlines two reasons for turning to tactics, the first being visuals. “We thought the HD-2D visuals would really match and look great in this tactics RPG genre,” said Asano. “And even after our release of Octopath Traveler, we saw that there were some reactions and kind of wanting to, anticipating, a tactics, FFT-style game with the same HD-2D visuals.”

The second is that, with the set-up of Octopath Traveler, the team had to work with standard RPG conventions.

“Specifically for a standard RPG Octopath Traveler, we were feeling that there were limitations on what kind of story we could write that appeals more to the adult, the older audience,” Asano says. “Because in these kinds of standard RPGs, it would be like you watch an event in the town, you go into a dungeon with a bunch of monsters in it, you fight the boss monster, and that’s kind of the cycle of the game.”

With Triangle Strategy, Asano said the theme could focus more on human-versus-human conflict, and appeal to an older audience. 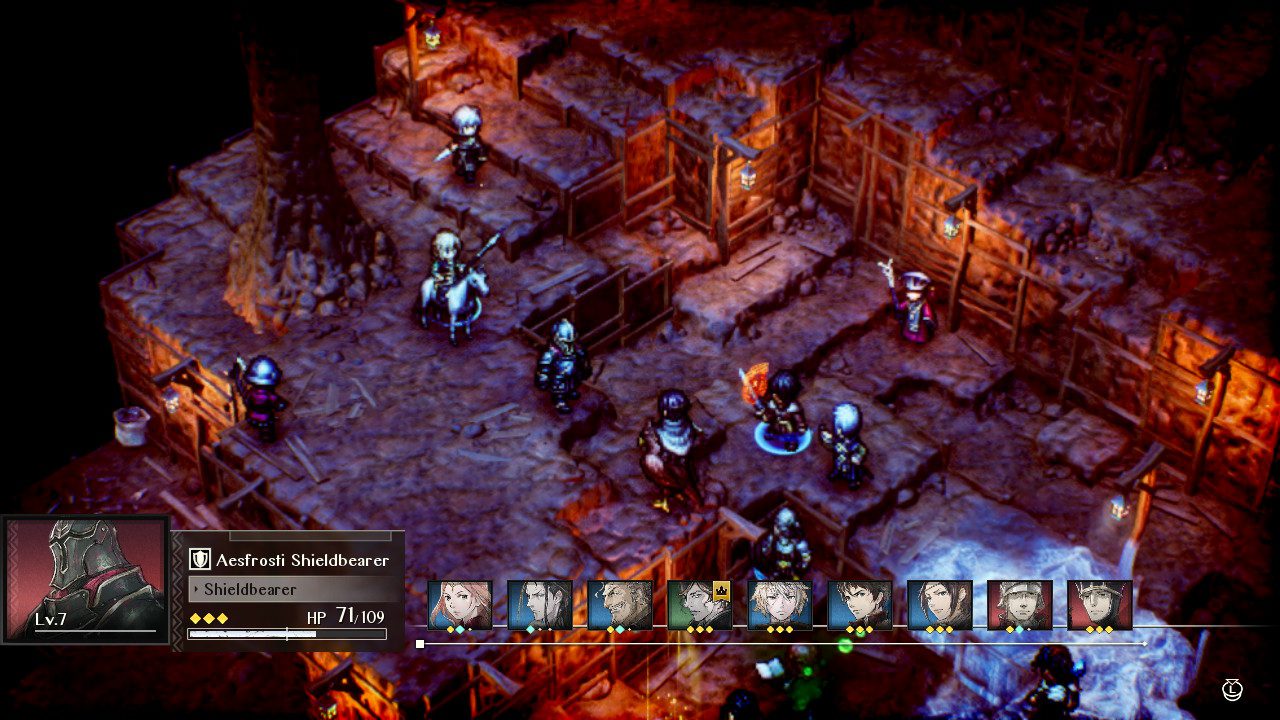 The pillars of the genre

Of course, influences were felt from previous giants in the tactical RPG space. Arai tells me he’s a big fan of both Tactics Ogre and Final Fantasy Tactics. Before starting on Project Triangle Strategy, he played a lot of Fire Emblem: Three Houses and says he got a lot of influence from those games.

There are many differences that allowed Asano, Arai, and the development team to explore different concepts from a standard RPG. Rather than a four-person team, the player gets to manage and field an army. And there’s the aforementioned bend towards more mature, heavy subject matter.

“In standard RPGs your team usually travels around to different areas and then goes to a new town, and that’s where you kind of go on missions or whatever you need to do to progress in the game,” said Asano. “But for tactical RPGs, we have an option to change the perspective, so the player can stay in one place but we can use the game and say, ‘Now from this person’s perspective, this is going on in this region.’ So that was another element that we liked about the tactics RPG genre.” 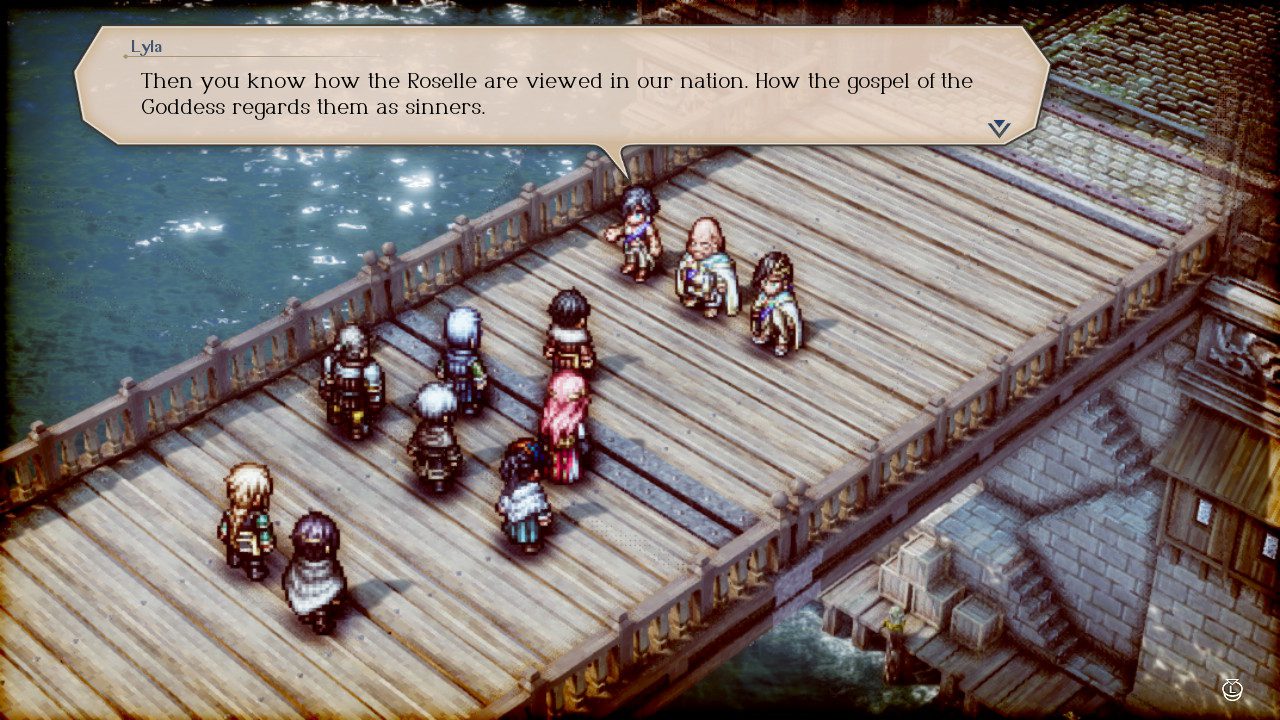 Triangle Strategy doesn’t fully adhere to the pillars, though. One noticeable difference is the lack of permadeath. In games like Final Fantasy Tactics, characters can fall in battle forever if not recovered fast enough, and in Fire Emblem, you don’t get the chance to rescue them from a critical hit.

“At the very beginning of this project, we discussed with the developer Artdink, do we take permadeath on this game? And we decided not to take that option,” said Arai. “Because to create the proper mature storyline, we needed the characters in the storyline.”

In other words, as Arai explains, the team needed characters in place to tell their story. Permanent death would complicate matters. But Arai does note that there are still similar elements of what players want, something I’ve already seen for myself: drama.

Characters can still disagree with you on decisions. And, Arai mentions, they might eventually come to a head on certain topics. So while death on the battlefield isn’t forever, story choices still offer that life-and-death tension. 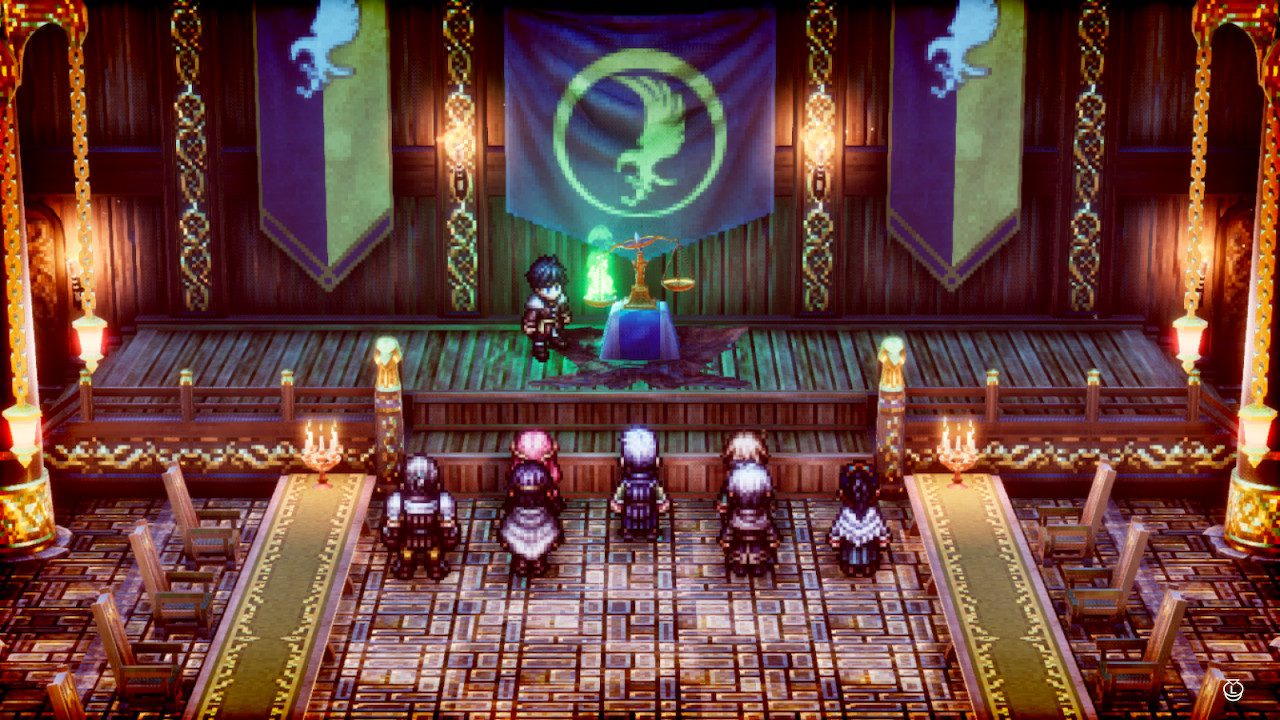 With those branching options, organizing the story of Triangle Strategy could be difficult. The producers confirm as much to me when I ask about it. Arai reassures me that effort was spent on managing the branches and making the points where they diverge clear, so players know what they’re headed into. And obviously, there’s some incentive to replay and see what other options might have led to.

The story, and even world, of Triangle Strategy seems immense though. Players hop in during a period of peace, but events soon transpire to tear apart a fragile calm and dip the major nations back into war.

As Arai tells it, there was actually a massive concept of sorts that had to be fixed up once gameplay got integrated. It ended up being one of the notable lessons learned from the project.

“Actually, from the really early years of this project, we created just an original story for this game as a kind of book, readable scenario, without thinking of any game aspects,” said Arai. “But we kind of failed that approach.”

He draws comparisons to Game of Thrones and The Lord of the Rings, as two fantasy texts later transposed to movies, games, and beyond. Once game systems were integrated, though, it didn’t work so well. It’s a gaming experience, not a story-only experience, Arai explains. 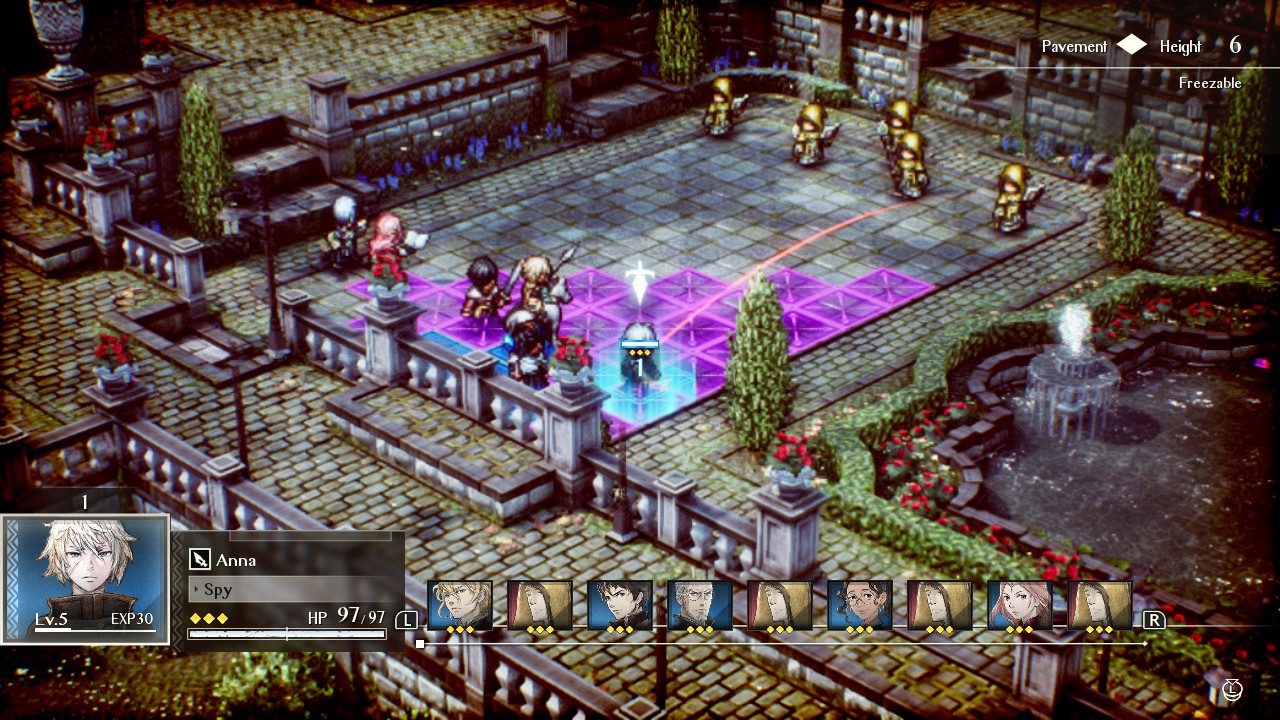 Rotating around in HD-2D

The HD-2D style of art is also a major draw for Triangle Strategy. Oddly enough, Asano says he hasn’t seen that much popularity in HD-2D games in Japan. He does note that they’ve seen a lot of overseas indie developers have been working on games in these styles, though.

There was an interesting problem to solve with using HD-2D graphics in Triangle Strategy, though: the camera. Players are able to swing the camera around in battles, to see around terrain and plan out moves. This meant the HD-2D art had to adapt to many angles and perspectives.

Looking towards the future

Of course, when I asked about other projects Asano and company might want to tackle in the HD-2D style, I didn’t get much. “Stay tuned,” Asano told me, laughing a little bit.

As far as Triangle Strategy goes, Asano says that the idea was to have the story from beginning to end all in one game. “There might be a possibility, at some point, that maybe we have a prologue or maybe we have an epilogue of Triangle Strategy,” said Asano. “But for now, at least, the thought that we put into this game is to have a story that from the beginning to the end is told within this game.”