We have the meats

Golden Light has been on my radar for quite a while. I bought it back in Early Access but didn’t plan on touching it until its full release, which came and went while I was playing WWE 2K22 and Elden Ring.

But look at it. This is my aesthetic. Ugly, meaty, and bizarre. It would be what I’d dream about if my brain could come up with something more imaginative than malls, noodles, and teeth falling out. It’s a roguelite, but nobody is perfect. 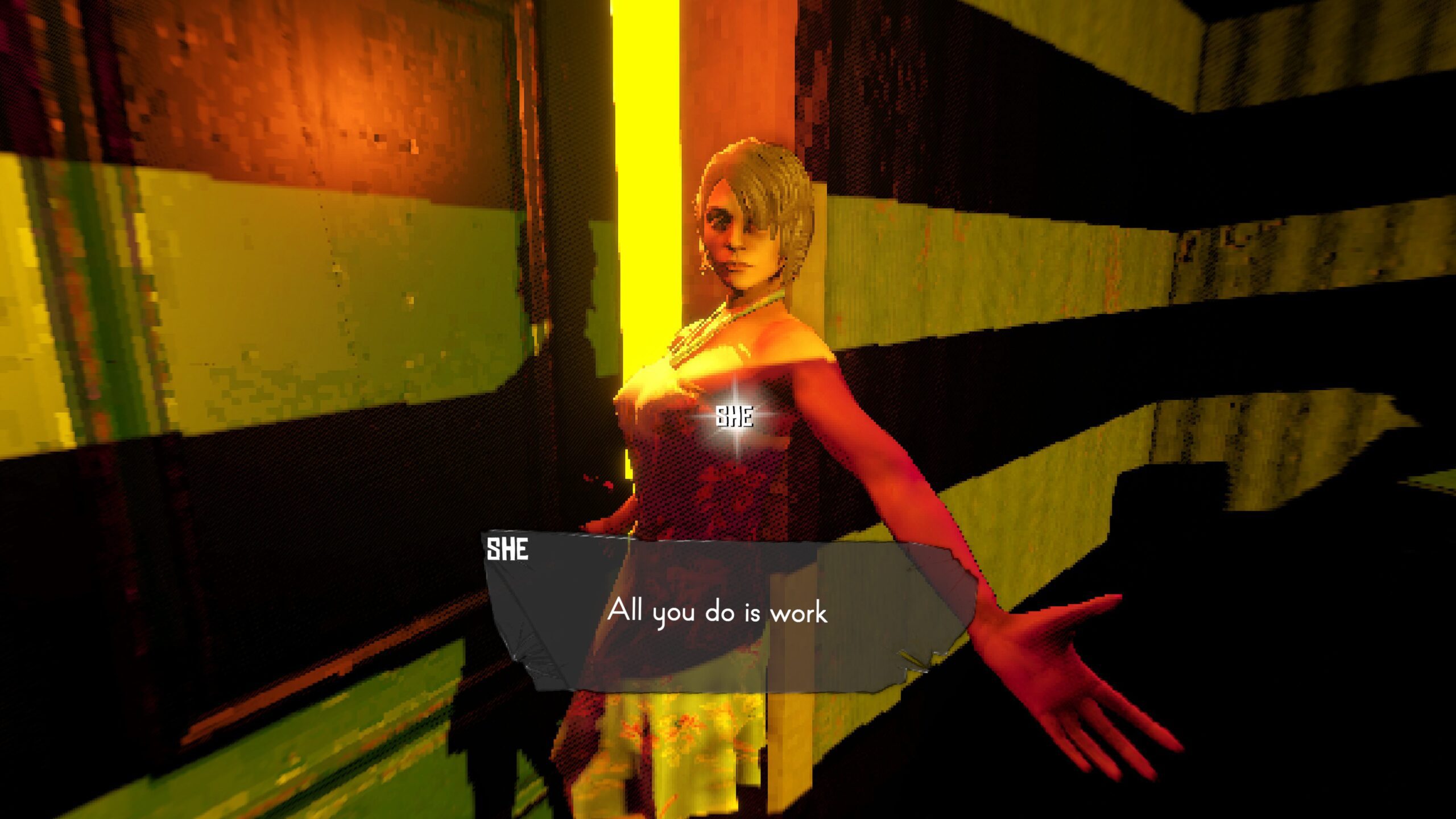 Your girlfriend is gobbled up by a meaty hole in the ground. Love makes us do crazy things, so you go after her down into the muscle tube. You could potentially find someone less prone to flesh abduction, but if she somehow gets out on her own, you’ll never hear the end of it. Plus, she’ll no doubt tell her mother, and that woman already hates your guts, so you’ll be hearing it in stereo. I guess there’s nothing left to do than put yourself at mercy of the meat and go after her.

You find yourself in the Gut, which is both Golden Light’s world and its main antagonist. How much it hates you depends on your actions within it and how well you manage your finances. While Golden Light is quick to prepare you with weapons and ammunition of each time, violence should only be committed out of necessity. Going HAM on the meat monsters will only piss the Gut off. The pissier the Gut is, the harder your life will be. Items will be more expensive and monsters will be more hostile. However, you can reset it by feeding a tree half your wealth.

It’s both accurate and misleading to call Golden Light a roguelite. It contains many of the genre’s hallmarks: randomized levels and loot, a loss of gear and power-ups upon death, and small gains that mark progress. However, “roguelite” typically suggests that you’re starting over upon every death, and that’s really not how Golden Light moves.

The tower structure is misleading. Technically, you’re attempting to move deeper and deeper into the Gut. However, rather than one continuous gauntlet, it’s separated into “biomes” that each have their own start and finish. Not only that, but if you die, you continue from the floor you left off on. It’s less like Binding of Isaac and more like King’s Field went insane and turned itself inside-out.

This may sound like a minor distinction, but it has a huge impact on the feel of the game in comparison to other roguelites. You only need to clear a floor to have made permanent progress towards the end, meaning that each and every one of them is their own struggle. The goal is to find enough keys to unlock the elevator down to the next level, and sometimes it’s a scramble just to hit the exit button before you’re claimed by one of The Gut’s monstrosities.

I know I said that avoiding combat is in your best interest, but it’s not always possible. Some enemies are just dicks and will attack you. Picking up the last key needed to unlock the elevator will sometimes frenzy the entire level. Then there are bosses, which are probably Golden Light’s biggest weakness, since they’re mostly just damage sponges that are so big it’s hard to take their form in and often just clip into you as they attack. Like everything else, you don’t necessarily have to fight them. You just need to stay alive, grab the keys, and get to the elevator. 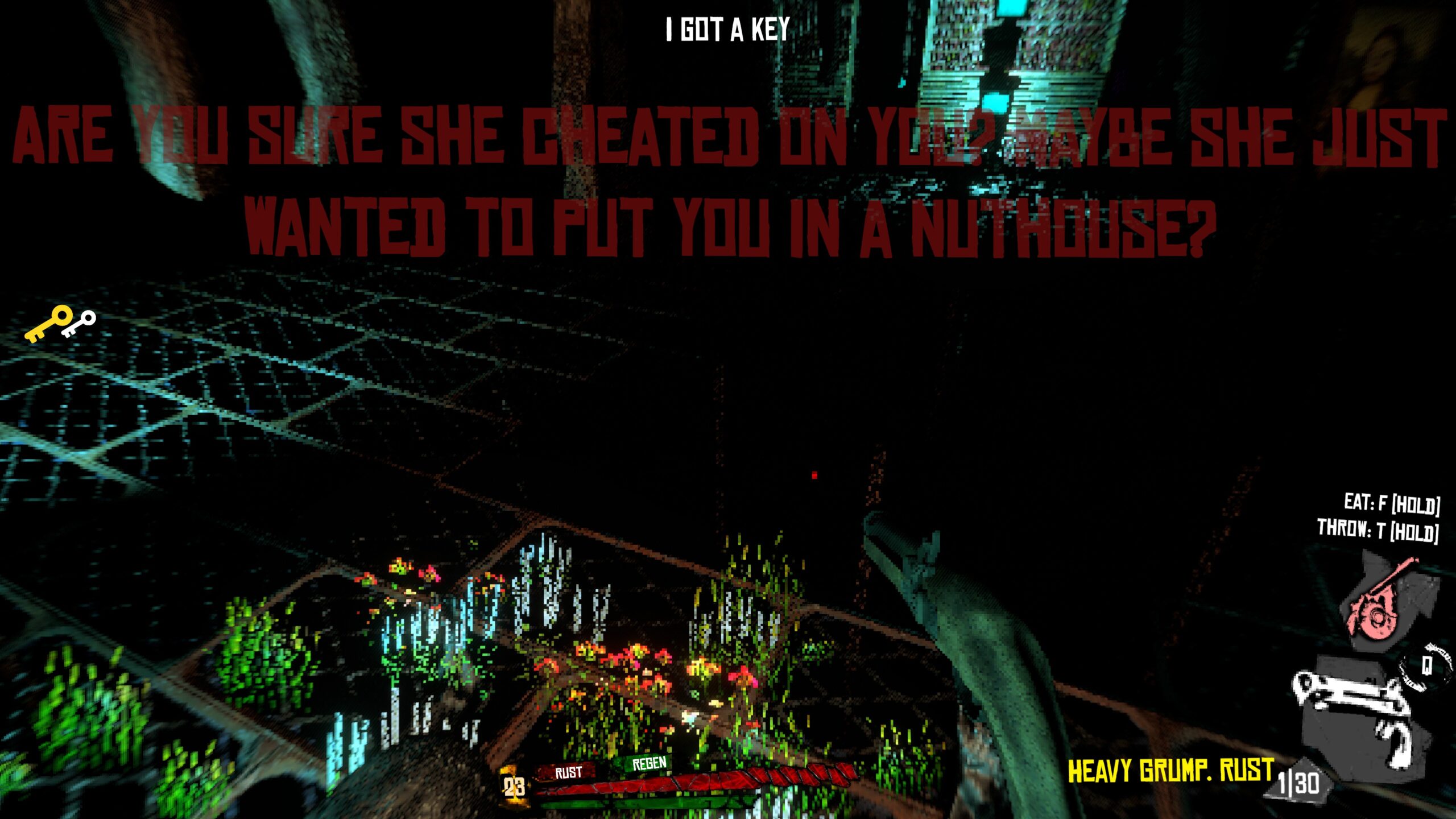 While progress through the Gut is never lost, you are given the option to reset any of the Biomes and start from their top-most floor. However, I never really found much use for it, since the hub world, the Eternal Field, offers plenty of opportunity to prepare if you take the time to explore it. Sometimes, I didn’t even bother to prepare since, as I said, it’s sometimes better to avoid combat altogether.

New biomes are found by unlocking sections of the Eternal Field, but beyond that, you also find characters and bonuses scattered about. It is sprawling and labyrinthine. There’s an oppressive fog that makes finding where you’re going difficult. It’s a strangely calm and idyllic break before descending back down into the gut. Just don’t let your guard down; there are mushroom people about. 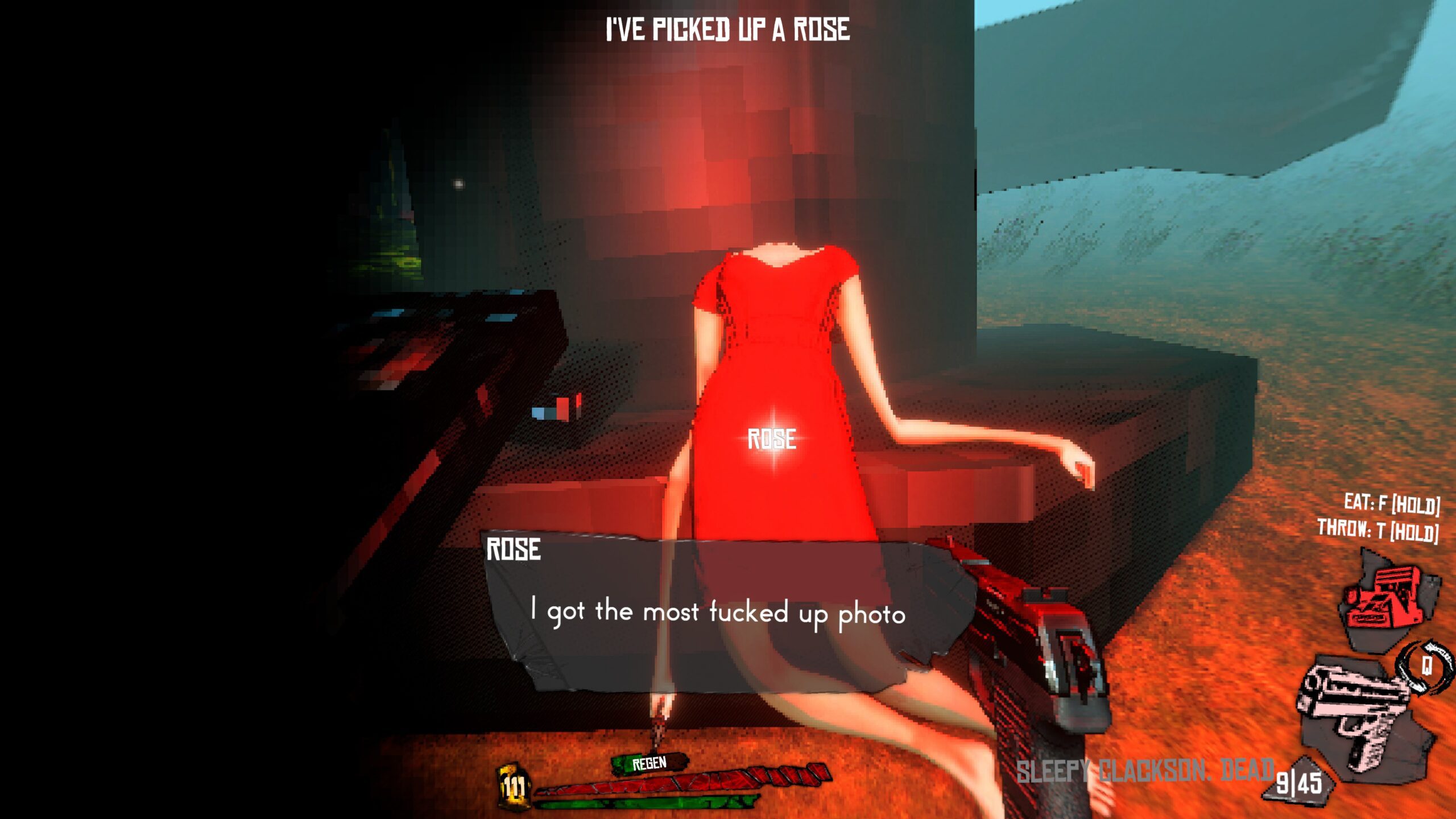 The story is told through cryptic flashbacks between floors. Golden Light certainly implies that it’s allegorical, but it’s difficult to discern a singular meaning. At its core, it seems to be about torment, and likely to be about self-inflicted torment. A relationship that has gone wrong is constantly hinted at — the happy times, the arguments, the disastrous end. An obsession with work and the resultant straying is tread upon, but then doubt is cast over it. It’s likely the protagonist is an unreliable narrator, only communicating their interpretation of events.

Regardless, I think it’s meant to hit different. The uncomfortable emotion it most evoked in me was guilt. The Gut is an omnipresent antagonist like — if you’ll excuse the left-field analogy — Gruntilda from Banjo-Kazooie. It constantly taunts you with lines that might be familiar to anyone in a rickety relationship. The Gut makes apologies, shifts the blame around, and casts doubt on who the real problem is. It also questions your penchant for violence, tells you in no small words when it is angry, and expresses its own regret. People are difficult. At least the Gut tries to communicate. 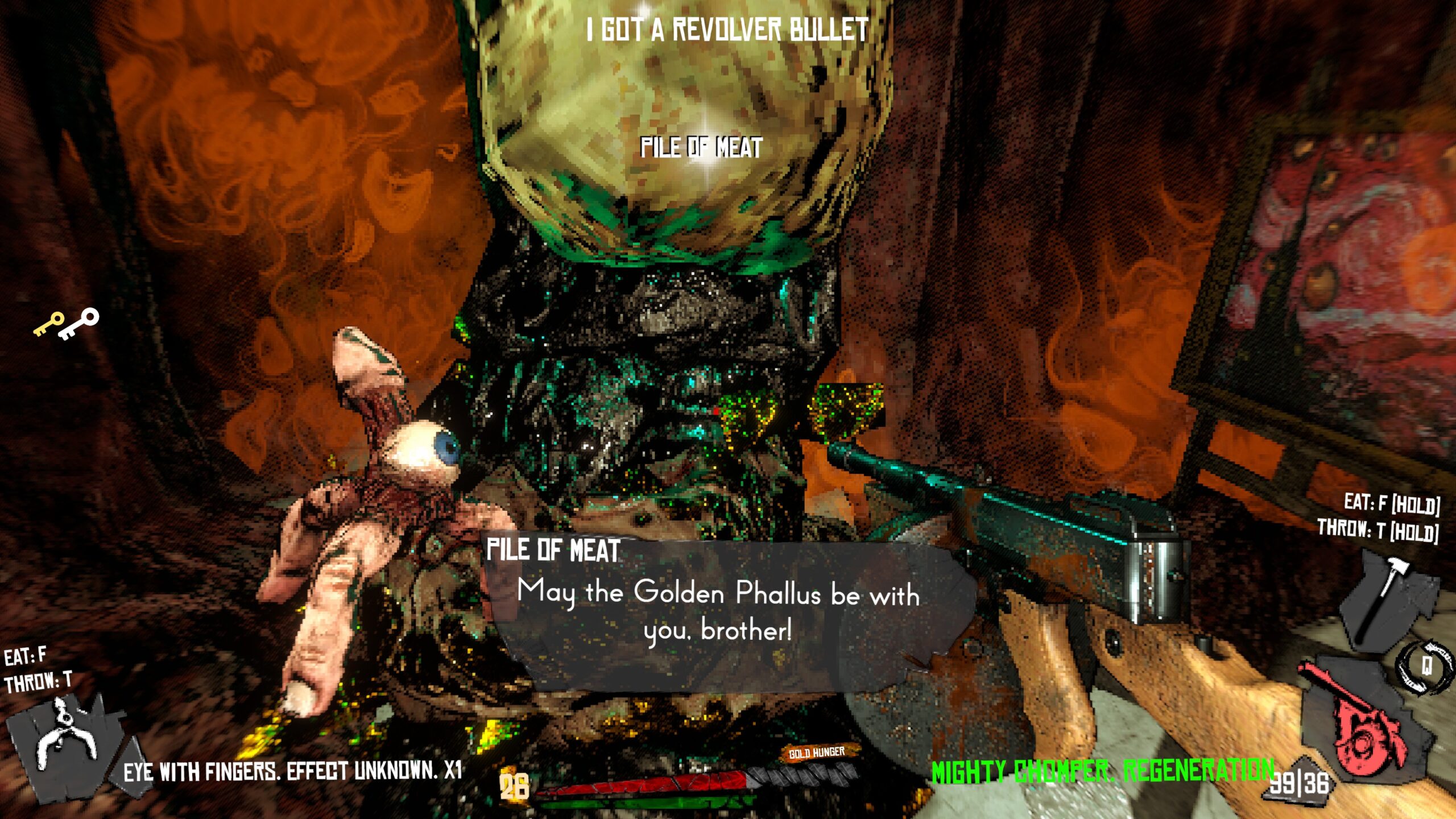 You don’t have to take it that seriously. Golden Light feels like an amalgamation of ideas that took form throughout, rather than a cohesive whole that was planned out from the beginning. You can focus on unraveling the secrets of gameplay, adopting more efficient tactics for traversing floors, and just go for the gold. However, the narrative really carried me through. It brought meaning to the bizarre gameplay and was a fascinating deconstruction of a too-common human experience.

At the same time, when it comes to gameplay, you are somewhat at the mercy of the game’s random nature which will absolutely annoy some people. Keys, weapons, mementos, and other items will be more available on certain permutations of floors, whereas others will be more dangerous. There are definitely skills to be developed to make things easier for you, but the best-laid plans can be derailed rather quickly.

I honestly think that Golden Light is going to appeal specifically to people with a specific type of brain rot. My specific type of brain rot, where we like our wretched absurdity mixed in with the type of emotions that eat at you from the inside. It’s the torment that Golden Light nails in every aspect. It’s the perfect interactive demonstration of what it’s like to have a mind that never lets the light shine. The fact that it simultaneously manages to be a unique and enjoyable experience is probably a very important fact that I’m too busy staring at my shoes to appreciate.

[This review is based on a retail build of the game purchased by the author.]

Marvel’s Avengers is completely revamping the war table, but is it too late?