The Phantom of the Omnia is there…inside your mind

Twenty twenty-two is shaping up to be a great year for fans of classic fighters. As we await the next generation of those genre stalwarts, plenty of pugilists from the past are getting another shot at the limelight. We have a revival of Persona 4 Arena coming soon, three versions of Teenage Mutant Ninja Turtles: Tournament Fighters on the way, and a plethora of old fighters making a return in the Capcom Fighting Collection.

There are so many fighting games out there right now, it can be easy to overlook something like Phantom Breaker: Omnia. After all, there’s very little nostalgia tied to this 11-year-old game as it was originally only released in Japan. However, you may want to pay attention to what it has to offer, especially if you’re looking for a fighter that doesn’t require a massive commitment. 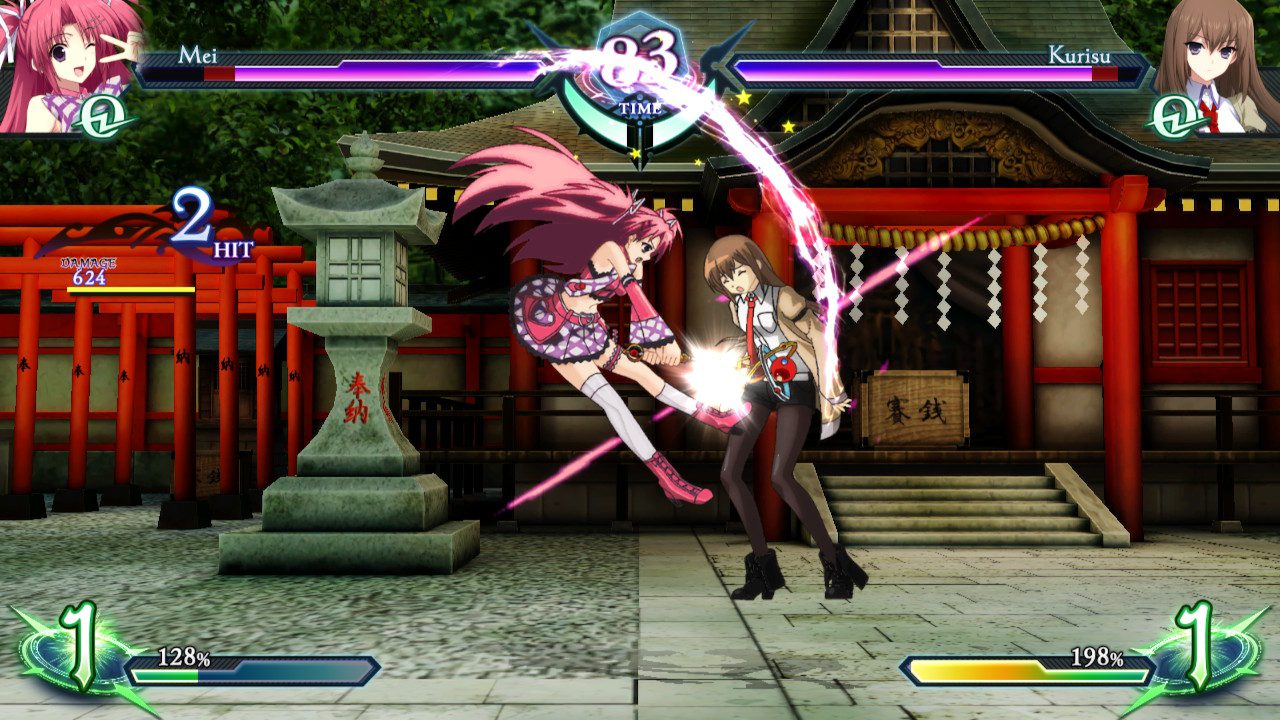 Phantom Breaker: Omnia can best be described as a “casual friendly” one vs. one fighter with plenty of room for depth. Similar to what is found in Power Rangers: Battle for the Grid, the game utilizes a simple four-button input structure with light, medium, heavy, and special attacks mapped to the controller face buttons. Shoulder buttons are pre-mapped with button combos—like heavy and special or light and special—that make pulling off more powerful attacks a snap. The control set-up is easy to learn, and even button mashers will be able to find some success smacking down foes with some fierce combos. The length and strength of those combos will not only depend on your skill with your chosen character but also the style of fighting you opt for before the start of battle.

Most characters in the Phantom Breaker: Omnia have the option of three different fighting styles to choose from: quick, hard, and omnia. The quick fighting style is characterized by faster and weaker movements and plenty of combo opportunities. Hard style strips back the availability of stringing together hits in favor of attacks that pack a stronger punch. Omnia, which makes its debut in this version of Phantom Breaker, splits the difference, giving players more opportunities to land beefy combos while also hitting with some strength.

During the two weeks I’ve been playing this game, I’ve favored the quick fighting style, but there are some characters who greatly benefit from going hard. Fin, who is described as a “long-range tricky” fighter, has a great number of gadgets at her disposal that makes her prime for the hard style.

Beyond the availability of combos, the fighting style you choose will also dictate what kinds of special attacks you can use. General special moves are the same across all three styles. All you need to do is hit the special button and a direction and you’ll cast out a special move. If you’re going with quick or hard styles, you have access to three maneuvers that aren’t available with omnia. The first is the Phantom Breaker, a powerful showstopper move that’ll use the entirety of your Burst Gauge while dealing a high amount of damage to your opponent. The second is Overdrive, which either increases your speed while decreasing the speed of your opponent (quick style) or triggers Solid Armor, which makes it so you can’t be staggered (hard style). Finally, quick and hard styles also allow for Emergency Mode, a Burst Gauge killing desperate move you can use if you find yourself stuck in a combo you can’t get out of.

If you go with omnia style, you can unleash the All Range Attack as long as you have a full Burst Gauge. The All Range Attack sends out heaps of orbs at your opponent that can be incorporated into a devastating combo. Unlike the Phantom Breaker, which is unique between characters and their fighting styles, the All Range Attack is uniform across the board. While I’m sure omnia style will be a draw for those players who have experienced this game before, I don’t really care for it. I prefer having access to Overdrive and Emergency Mode if I ever find myself in a pickle, and the additional strength omnia has over quick style wasn’t enough to sway me from the game’s most combo-friendly style.

All of that is just the basics of what the fighting in Phantom Breaker: Omnia has to offer. There is a lot more depth baked in here, including cancels, recoveries, and Slip Shift, the latter of which lets you sidestep an attack if you can manage to pull it off. Don’t worry, the AI will pull it off all the time. There is a tension gauge at the top of the screen that fills up as attacks clash and cancel each other out that, when full and active, allows for even more devastating attacks that can turn the tide of battle. For anybody who wants to get serious about this game, there are many techniques available that’ll let you control and destroy your opponent. For those just looking to get into it casually, you might find yourself pulling off attacks and combos that you can’t explain. That’s how I was for about the first four days as I did my best to conquer the game’s many modes. 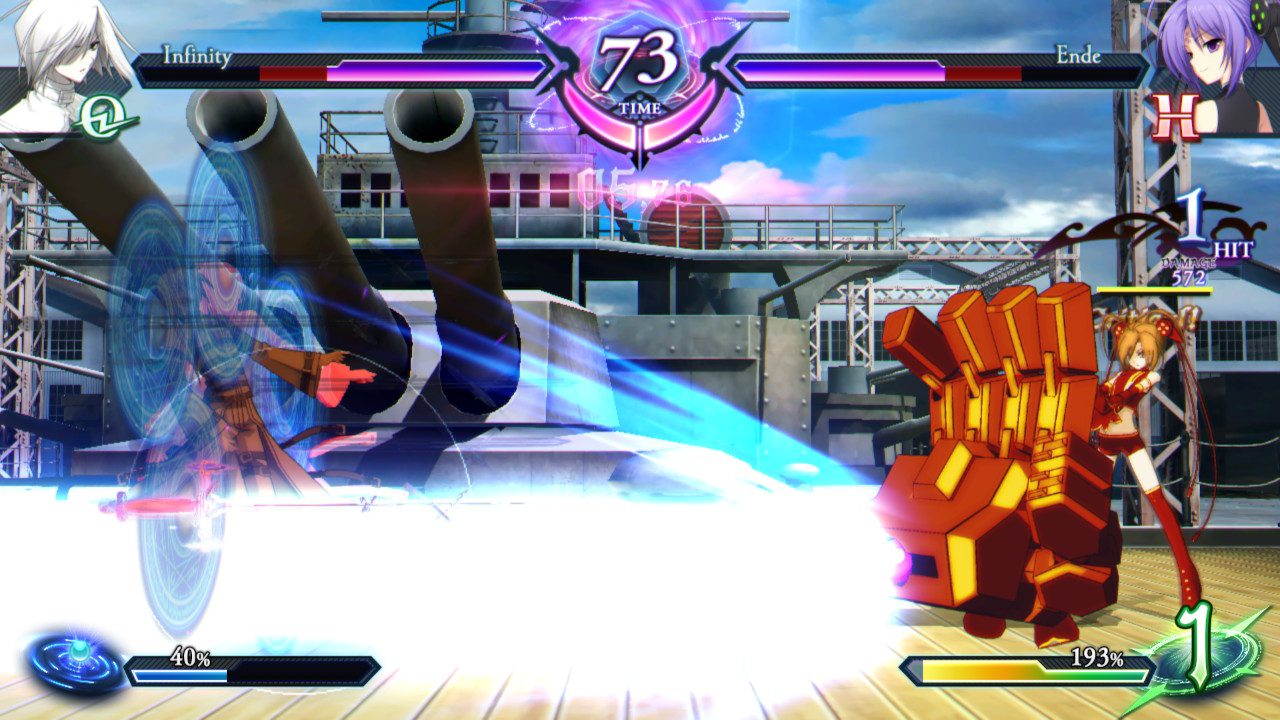 Phantom Breaker: Omnia has a full suite of modes available for players, including story mode, arcade, time attack, score attack, endless battle, local versus, and online play. The game does not have rollback netcode, leaving you at the mercy of your opponent’s connection. There are options available to somewhat weed out people who disconnect, but given the limited number of people playing online during this review period, I’m not able to speak for its capability. What I can say is, surprisingly, the game works pretty well online. My first match had all the pitfalls you find over in Smash Ultimate, but everything after that was smooth and responsive, even when playing against Japanese players with a single bar of connectivity.

As for all the other modes, they’re pretty good if nothing too exciting. The classic arcade mode is far too long of an experience for its own good and should probably have options for a certain number of fights rather than throwing you at the entire cast every go. If you want to chase leaderboards, time attack, score attack, and endless battle have you covered.

Story mode, rather than being one complete narrative looping in all available characters, is split up by individual fighter. You’ll guide them through single-round matches against a good chunk of the cast hoping to get their wish granted by a mysterious man named Phantom. Some of the cast have big dreams, others have a duty to stop everyone from fighting for fear of what could happen should Phantom actually grant their wish. Story mode, along with the rest of the game, is fully voice acted in English and Japanese, and while it may sometimes be trite, I think the localization team did an excellent job giving life, meaning, and purpose to the cast here. 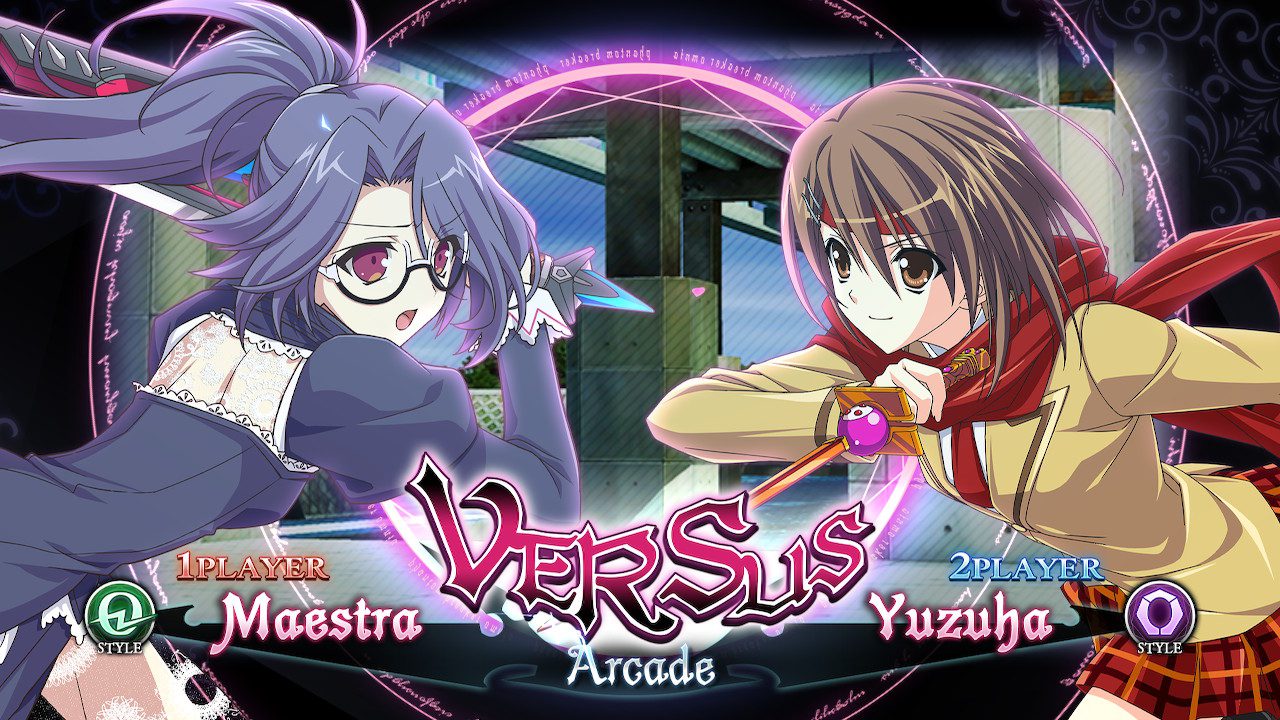 Phantom Breaker: Omnia has 22 available fighters, including newcomers Maestra and Artifactor. Some of the characters are dupes and a few could best be described as echo fighters, but it’s a pretty well-rounded cast. The game sets up the parameters for each character in the select screen so you’ll know right away if the fighter you’re picking is better at zoning or getting right up in their face. My preferred fighting style is fast and close, so I gravitated toward those close-range brawlers like Yuzuha, Ren, and Kurisu, the latter of whom is on loan from the Steins;Gate franchise and can have a comically short reach. Once I really wrapped my head around those mid to far-distance fighters like Artifactor and Fin, it really opened me up to a wide array of strategies.

As a casual fighting game fan, I am drawn to the type of experience Phantom Breaker: Omnia has going for it. It’s very low commitment, not the type of fighter where I feel I’m going to have to invest day after day to be able to pull over epic combos and spectacular specials. That’s certainly an option for those who want to make a serious go at it, but I’d wager, like most other fighters that attempts to simplify the fighting game experience, this one will likely remain favored by a more easygoing audience than those who destined to stand atop the podium at EVO.