Neon White speaks to my inner speedrunning sicko with its demo

A heaven for those who gotta go fast

Neon White was already pretty high on my own list of most-anticipated games this year. The indie project from Angel Matrix and Donut County creator Ben Esposito looked like a fast, gorgeous shooter.

The good news is that it’s just that. But I can also confirm, after playing the Neon White demo currently available as part of Steam Next Fest, it’s a little bit more. The game isn’t just about taking out demons, but doing it fast. And it’s built to make you keep wanting to reset the level for a new time.

The story pin of Neon White is that you’re a badass who’s died and gone to not-quite-heaven. Recruited to be one of many demon hunters called “Neons” by heaven’s angels, you—Neon White—compete with other Neons to earn a ticket into the more pleasant side of the afterlife. 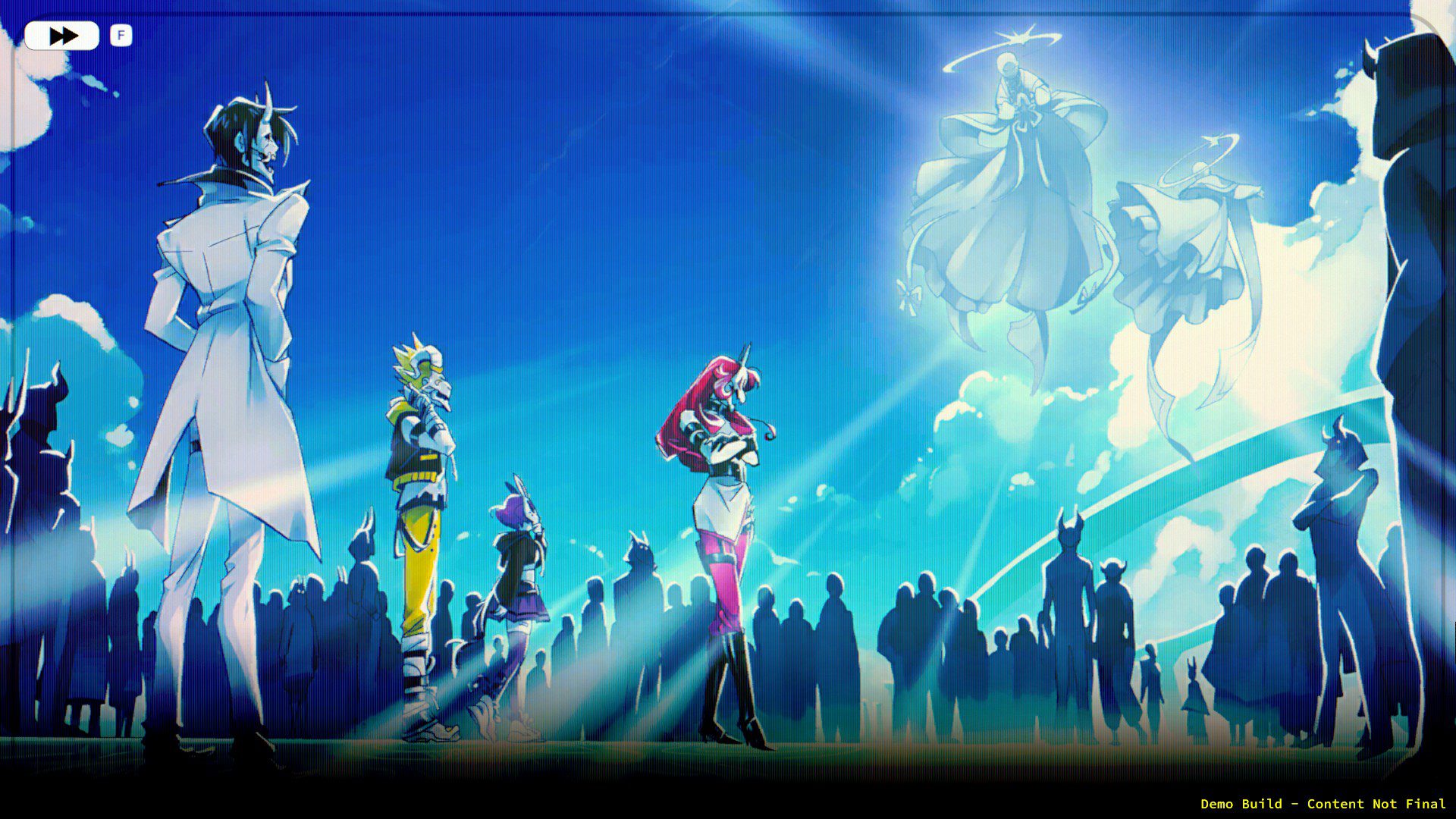 These competitions take place in stylish but easily readable levels, where you run from start to finish line, exterminating every demon and finishing as fast as possible. At the conclusion of the run, you get a grade. Bronze simply counts as a clear, and is usually pretty forgiving. Silver gets a little tougher, but adds a special gift to the level, usually off the beaten path. Gold unlocks some helpful speedrunning hints, and Acing a level opens up the global leaderboard.

The ranking system is one of several reasons why Neon White feels like the perfect entry point to time-trial competition and speedrunning. The staggered approach makes it easy for those who want to just clear levels to keep moving on, while those who want to really jockey for a top spot get more tools as they shave seconds off their times. The hints system is particularly effective, and restarting a level has a snappiness that reminds me of Hotline Miami.

Neon White is also pretty easy to pick up. On a keyboard and mouse, it’s mostly just WASD and Space to move around, with an extra key dedicated to swapping your soul cards (weapons). Each card has a main fire and alt-fire; a reusable damage source and a one-off utility effect that “burns” the card. The pistol is a standard, semi-auto pistol, but sacrificing it gives you a double-jump. The machine gun launches a delayed-detonation grenade, which can also damage boost you across gaps.

What’s great is how simple and clean this movement feels in the moment. There is no crouch-jumping or weird reaches across the keyboard. Neon White does an impressive amount with its inputs.

This extends out to the levels, where different routes are made apparent through repeat runs. I might take the long way around the first time, before realizing that I could use a damage boost to skip a major portion of the level. Demons tend to mark the critical path, but geometry is at your discretion. The hint markers really help get you in this mindset too, pointing out some clever skips to help reach an Ace.

While the vaporwave heaven of Neon White was visually appealing all on its own, this Steam demo has really brought another strength to the fore: its speedrunning potential. Speedrunner Bryonato showed off some of its potential in a short segment on the Next Fest stream, and it already looks great.

Already, I’m starting to trade times with friends and compete for hundredths of a second’s advantage. The leaderboard that pops up after every clear amps up that drive, egging me on with every inch I gain on friends’ times. 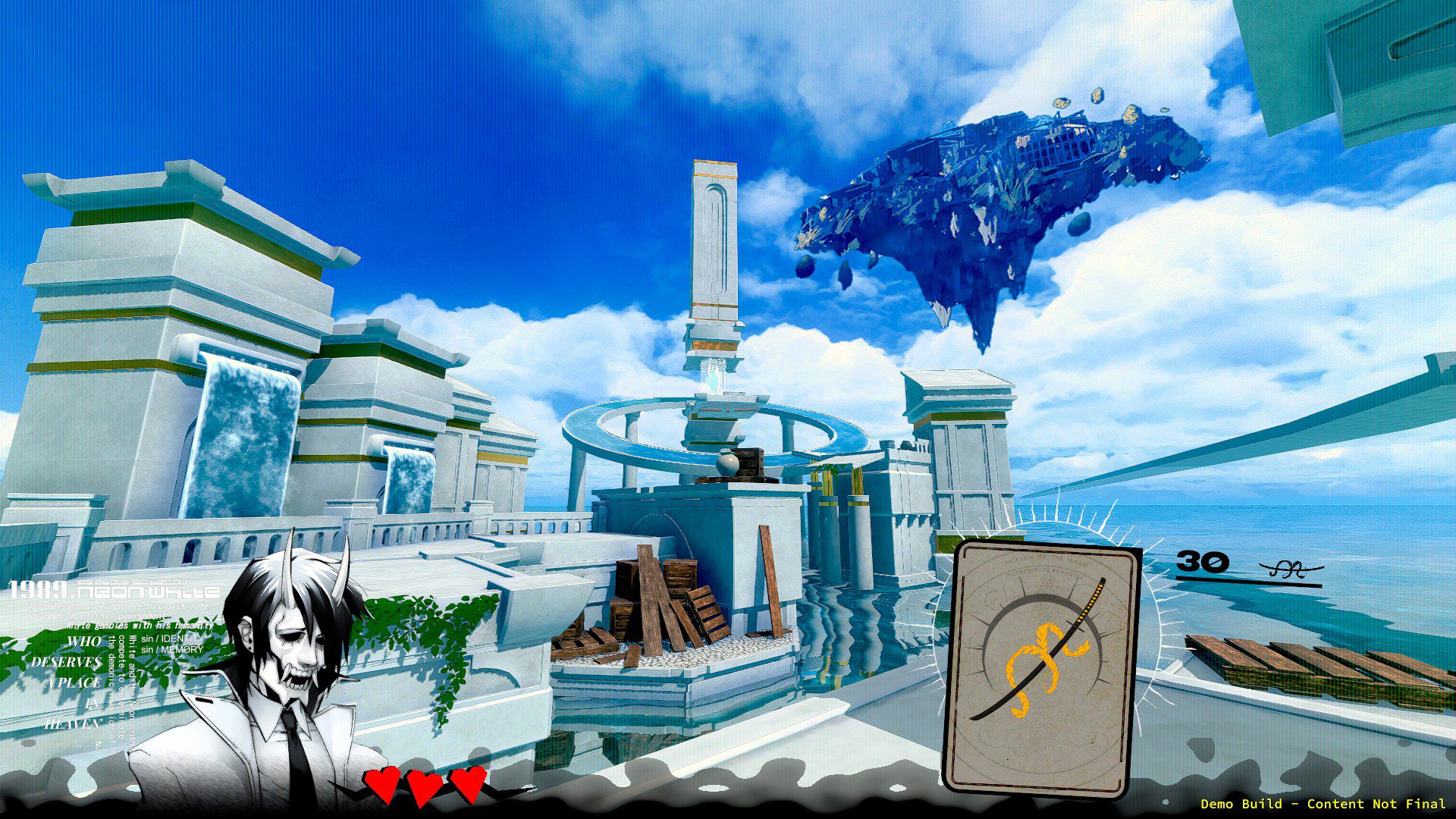 Neon White looks pretty interesting visually and conceptually, and it’s good to know now that the gameplay matches up too. If the final version keeps the same energy and drive of its opening levels, this could be one to watch.

Neon White is coming to Nintendo Switch and Steam sometime this year. You can find the Steam page and demo here.